How to be a Rock Star Therapeutic Parent 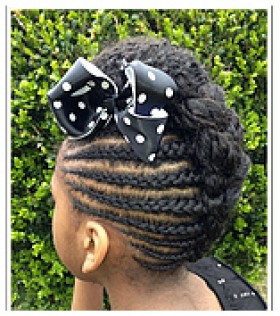 Every morning I turn on Max & Ruby and sit down in the blue chair with the red cushion. My three-year old daughter grabs a little chair for herself and places it between my feet. I have a wide-toothed comb, a rat-tail comb, and spray-on conditioner. I also have a box of barrettes, cloth-covered rubber bands and little plastic snaps.

First I separate Madison's hair into sections and spray it liberally with the conditioner. Then I use the wide-toothed comb to smooth the tangles from her curls. Next I use the rat-tail comb to make parts. Sometimes I divide her hair into a dozen little squares to braid. Sometimes I give her two fat pigtails down low behind her ears to leave room for her bike helmet. Other times I pull back the top and braid it to keep the hair out of her eyes and leave the rest down to froth around her shoulders. Depending on the style, our morning ritual can be as short as twenty minutes or as long as an hour.

My daughter's hair is rich, chestnut brown touched with auburn. It bounces around her ears in silky corkscrew curls. It is the kind of hair that captures attention in the grocery checkout line.

"Look at that gorgeous hair!" the observer exclaims. "Wherever did she get it?"

They don't really need to ask. Underneath that mop of glistening curls is a café au lait face. It’s obvious that she got her beautiful hair from her African American ancestors. But people ask this because I am white, and clearly there is some story to our daughter's arrival to our family. "Where did she get that hair?" is a question that comes from white people. Black people simply say, "She has good hair."

It's what her birth mother said at one of her visits. "I hoped she'd have hair like this," Jessica said, twisting a curl around her fingers. Our daughter's first mom, with whom we have a fully open adoption, has kinky hair that gave her fits when she was a child and that she now wears in a soft afro. "She has good hair."

"But isn't it all good hair?" I said, quoting the title of a book on African American hair care (It's All Good Hair) that's widely recommended in transracial adoption circles.

Jessica snorted. The snort said, "Spoken like a white person."

Madison is not tender-headed–she never yips in pain when my comb hits a snarl–but getting her to sit (mostly) still has been a matter of training. I started having her sit for hair time before she had much hair at all. We both needed the practice.

"I want to wear it foofy," she might say. She means in two fluffy ponytails. If her hair was in braids before we sit down to style, her ponytails will be soft ripples. If we mist them with water, the curls will bounce right back. Sometimes she wants twists, two strands of hair twisted around each other to make a sort of looser version of a braid.

"Like Rudy," she says, because she admires Rudy's hair on old Cosby Show reruns. For twists we might use tiny clasps called snaps at the end of her hair. We have flowers and jeweled hearts and little opalescent butterflies. Madison fiddles with them and by the end of the day her hair is still in twists but empty at the ends. I find the clips scattered around the house and I pick them up to put back in our barrette box. Replacing snaps can get expensive.

Our babysitter Jaime is a young African American woman with inexhaustible energy and enthusiasm who wears her hair in natural short twists, which she usually covers with a pretty scarf. Every morning she greets Madison by commenting on her hair. A neutral, "Look at your hair today!" means I could have done better. An enthusiastic, "Look at your pretty-pretty braids!" and I can tell I've done a good job.

I knew that this was her ever-polite way of guiding me while I tried to figure out the social mores around my daughter's halo of curls. One morning I asked her outright how I was doing on Madison's hair.

Jaime seemed relieved I had asked. She mentioned the products that would work best on Madison. She checked out my comb and cautioned me against over-conditioning.

"What about this?" I asked. My daughter has little flyaway wisps that escape around her face. "Do I need to do something to keep them down?"

"No, but if her hair was really nappy, that would look like a mess," Jaime answered. She paused to cup Madison's chin in her hand and tilted her head up to see her eyes. "But we know our children's hair comes in all grades. We know that her hair just does that and it looks just fine."

There are other words for nappy. There is "textured" or "kinky" or "coarse." My black friends have instructed me not to say nappy because this is a word that in the mouth of a white person has the dim, lurid overtones of hatred.

"I can call a child's hair nappy," explained one of my former co-workers. "But you can't. Don't even go there."

After we adopted Madison, one of my white friends asked, "Can you say it now?"

"I don't think so,"I said. To make sure I asked a black friend. That's when I learned the word "textured."

When I took my daughter across the country to meet her extended birth family, I was nervous about her hair. She didn't have much then, being only about fifteen months old, but what she had was a soft blur of curls. Left alone it was cute but messy and there was barely enough to style.

"Just get the parts straight," said a black friend. It's all about having a good part."

Now I practice parts the way I used to practice my tennis serve. I try to put style, grace, and accuracy into my daughter's parts. If the line wavers at all, I comb her hair out and start again. I'm finally getting the hang of it and now I can make complicated parts at an angle to each other. I'm proud of my parts.

I'll admit it, I was scared to adopt a daughter. Once we knew we would be adopting a black child, I read books about hair care and felt worried. I've never been good with my hands. I hate to sew and crochet; even writing a letter by hand makes me groan. How would I manage her hair?

Most of my white friends don't understand the fuss. They have daughters with long hair or with short hair and sometimes they send them out looking like they're wearing a bird's nest on top of their heads.

"Well, she won't let me get a comb through it," they shrug.

One day I was talking to a white friend about Madison's hair and about trying to figure out how to keep my daughter walking between two worlds with her head held high.

"I just want her to look right," I said.

"She'll look right because she's your daughter," my friend said.

I found her assurance well intentioned but frustrating. When my white friends argue that I shouldn't "have" to adhere to black standards in styling Madison's hair, they are refusing to acknowledge that this is a response driven by white expectations, created by a culture where the texture of black hair is considered a problem, an anomaly. When they say, "Would you do this for your biological child?" they ignore the fact that my bio son is white.

When my white friends' daughters leave the house with uncombed hair they subvert ideas about shiny neatness and little girls. My feminist friends smile easily at their tangled-headed daughters playing princess. But this is not a privilege extended to children with brown skin. I know that my daughter–like any child of African descent, boy or girl–carries the weight of racism on her curls. The cultural image of the unkempt black child–of Buckwheat and wide-eyed pickaninnies–is part of a racist legacy used to argue that African American parents didn't care for their children and that their children weren't worth the care.

White people, like my friend, usually assume that my whiteness protects my child. It's a dangerous assumption. My daughter cannot escape racism just because she is my child. I don't want to send my daughter out into the fray without the visible respect of her mother. I do her hair to send the message that her curls are worth the trouble because she is worth the trouble. I'm telling the world that she is valuable and loved and protected.

None of this is a burden to me. I look forward to styling Madison's hair every morning. I enjoy the closeness, the quiet focus of my mind while I sift through the barrettes. I mist my daughter's hair with water and prepare to unknot the tender place at the base of her skull, the place that my black friends tell me is called "the kitchen."

At the end of our styling sessions I always say the same thing.

"Thank you, hairdressing lady," my daughter says formally. "Thank you for doing my hair."

Then she's off to go look in the mirror and I put the comb away.

Contributed by Brain, Child: The Magazine for Thinking Mothers.

About the Author:  Dawn Friedman lives in Columbus, Ohio, with her husband, son, Noah, and daughter, Madison. Her work has appeared in Salon.com, Yoga Journal, and Greater Good. She was an editor at Literary Mama and blogs at thiswomanswork.com.