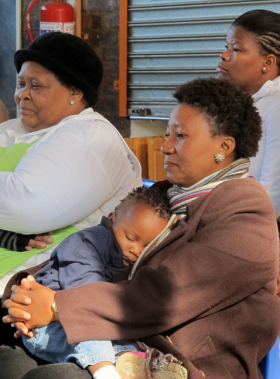 Jo’burg Child Welfare (JCW) is a highly respected, 100+ year old NGO that does amazing work on behalf of the vulnerable children in Johannesburg.  Spence-Chapin is honored to partner with this historic agency whose mission is aligned with ours.

Jo’burg Child Welfare provides services to over 4,000 children and families annually and adoption (domestic and international) is only a small part of their work. They have four centers that house and provide for children of all ages, from infancy through the teenage years.  One of their centers also provides short-term housing to pregnant women. In addition, they recruit and train foster families, plan and prepare for children to be reunited with their birth families and provide intensive treatment to survivors of sexual abuse. South Africa is home to more that two million orphans and JCW’s work makes a difference in the lives of some.  All of this and more make JCW an agency that is highly respected among its peers in the field as well as with the governing bodies of South Africa.  When the South African Ministry of Social Development’s Central Authority (the governing body that oversees adoption) was looking to expand their international adoptions, they received an overwhelming number of applications from agencies across the country.  Jo’burg Child Welfare was one of only two agencies approved for adoption to the United States.  During Spence-Chapin’s meetings with the Ministry, it was clear why they chose JCW.

The passion of the employees, from the Executive Director to the receptionist who greets you, was always apparent.  While visiting their sites, it was clear how each employee felt about their commitment to the well being of the children and how seriously they took the mission and purpose of their work. The vulnerable children of Johannesburg have a champion in Jo’burg Child Welfare.