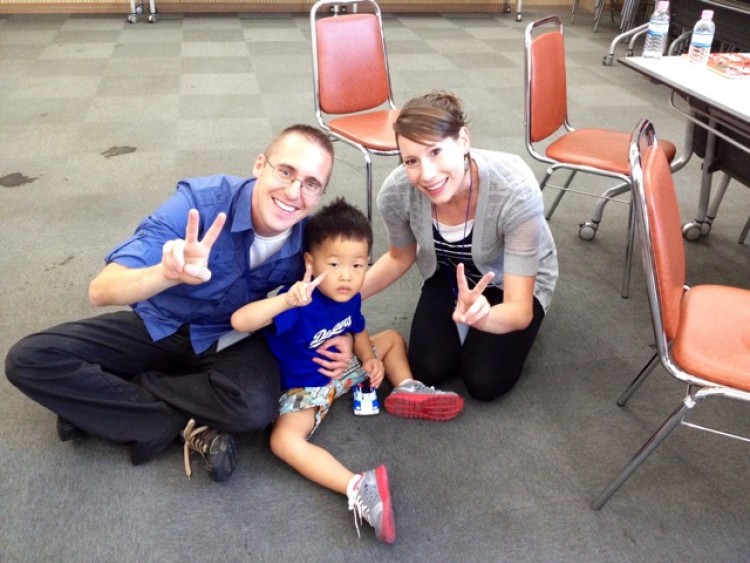 God planted a seed in our hearts for an international adoption early on in our marriage. A seed that He would carry on the wind to reach our son across the sea. It was a desire to build our family this way for many years, but we knew that financially we weren’t prepared. Despite those facts, God had a way of tugging on our hearts to start the process in the fall of 2012.

While taking an afternoon walk, admiring the beautiful foliage, I once again felt an urgency to step out in faith towards an international adoption. When I spoke about it to Arthur, he said that he felt the same unexplained urgency. We knew it was time to act, so we decided to pray individually about which country God was calling us to. During that time, I had a dream that I was holding a child and heard the Lord say firmly, “Do not hesitate. This is something I am going to do alone. Do not toil.” One week quickly passed and we sat face-to-face ready to reveal our answer. At the same time we responded, “South Korea!” What a confirmation it was to be led to the same country without discussing it beforehand. So we intentionally started tending the seed, by faith, searching for an adoption agency that worked with South Korea. We found WACAP. There were months of paperwork and interviews that followed. We chose to accept any child, boy or girl up to the age of two. WACAP told us that it could be over a year before we would receive a match. Arthur and I prayed about which little one would be sent to us. We felt that whichever child came first would be the one that God had chosen for our family. We both were confident about the paperwork and the age of the child being under two years old. While on another walk through our neighborhood, Arthur said, “I know that we said a child up to two years old will be right for our family, but I feel that God is telling me they will be three or four.” I didn’t know what to think and thought that my husband was wrong, but God was about to reveal His plan.

On January 11, 2012 I was coming home from work when Arthur called and excitedly told me that we had received a referral packet in his email. I raced home so we could review it together. It was a boy! He was dressed in a trendy vest and looked so well cared for. His name was Wung and on the cusp of turning two years old. We knew that meant he would be between the ages of three to four by the time the paperwork and court decree would be finalized. Wow! My husband had truly heard from the Lord, and we knew that this precious child was destined to be our son! We immediately responded with a yes to our agency. Wung was living in Seoul, South Korea with his foster family and they were told that his forever home had been found. We would give him the name Jonathan which means, God has given. What a gift he was indeed!

It is truly amazing to see how God can plant a seed of hope in a family’s heart then bring supportive people along to help water and develop its growth. That’s exactly what He did for us. We had been able to scrape together funds from our own blood, sweat, and tears to pay for the initial fees. Once we were officially matched around March 2013, we realized that we didn’t have the money to pay for the upcoming ones. They were all coming due at once, and we panicked. Then I remembered the dream that God had given me about not hesitating or toiling, so we believed that somehow He would make a way. It was clear that we should remain calm and wait for God’s provision. We had very dear friends and loved ones who threw fundraisers and assisted us in every way possible. It helped us with part of our fee burdens, but we still needed a significant amount. Then God opened a door with a Christian credit union in California who approved us for the remaining balance. In the upcoming months God would provide even more than financial peace. We had no idea of the storm on the horizon that would try to kill our dreams.

Only a month later, Arthur was heading out on another military deployment. I usually never went home to see family during these, but my mother had called. She said that my Dad’s health was declining and that if there was ever a time to come home it was now! We decided that while Arthur was deployed, I would go home to Alabama to be with my family through these hard times. My Dad passed away from stage four pancreatic cancer only weeks after I arrived. I barely got to say goodbye. Summer was coming and I stayed with my mother to try and help her get back on her feet again. It was hard but we looked forward to the day Arthur would come home and having our dossier sent to Korea. We managed to get adoption paperwork done, even though we were on opposite ends of the world. We were on the verge of having all of the paperwork completed so that we could get our court date to meet our son, when the unexpected happened. I found a lump on my neck. Two days later, I found myself sitting at the doctor’s office setting up for a biopsy. It confirmed our worst fears. I was diagnosed with thyroid cancer that had spread to my lymph nodes. The Red Cross was contacted, and Arthur was brought home to be with me during my upcoming surgeries and radiation therapy. What hurt the most was that our adoption was put on hold until the treatments could be completed and the cancer evaluated. This would set us back six months. It was such a dark time, but we knew that we needed to hold on to God’s promises for our family. We weathered the storm, leaning into Christ, and got back on track February 2014. The oncologist confirmed that my life expectancy and ability to parent would not be an issue. He concluded that I had over a ninety five percent survival rate. At that point it was full steam ahead to reach our little one!

After all of the waiting and blind leaps of faith, we received news that we had been issued our court date. The past pain and trauma instantly vanished, because we were going to finally hold the one who God had promised to be ours. Arthur and I arrived in Korea on September 10, 2014 and tried to get settled knowing that we would meet Wung the very next day.

Hours before our play date with him, we paced nervously back and forth in our hotel room. At fifteen minutes away from meeting our darling, with sweaty palms, we walked to the Holt Children’s Services building. Riding the elevator up to the sixth floor, we looked around for any sign of him.

We were gathered with other families in a large room for an overview of what to expect in court. Everyone was sitting in chairs facing a stage where the speaker was talking. We could hear little ones playing and lots of commotion going on behind us. It was hard to stay focused on the details of the meeting, because we knew he was probably only feet away. Then we heard the words that we had waited forever to hear, “You may now turn around and meet your children!” On the far end of the room we saw him. I think we floated over to introduce ourselves because we were walking on clouds! Kneeling down to his level our eyes met and I felt an immediate heart connection. Our labor of love was blooming in front of our eyes. We played for hours with our shy, handsome son. He knew us as “umma” (mom) and “appa” (dad), which melted our hearts beyond words. The highlight for me was the short nap he took resting against my shoulder. Arthur had his own special moment of giving Wung his very first piggyback ride on “appa”.

The following days, we were only allowed one more play date before court. It was everything we had hoped for. The time came to say goodbye and reassure him that we would soon be returning. He wanted us to ride the elevator downstairs with him and the foster Mom. We watched him walk down the hall and behind a glass window. I wouldn’t take my eyes off of him until the very last view of his body disappeared.

The next day we stood before the Korean judge and nervously answered his questions. The last thing he said to us before dismissal was, “I hope you have a wonderful life with your son.” What a relief! It was the longest eight minutes of our life, but now we were sealed as a family. It was so hard leaving Korea the next day, but we knew it was necessary while the legal process was being finalized. Even though we have to make a second trip for custody, we are already united soul to Seoul.