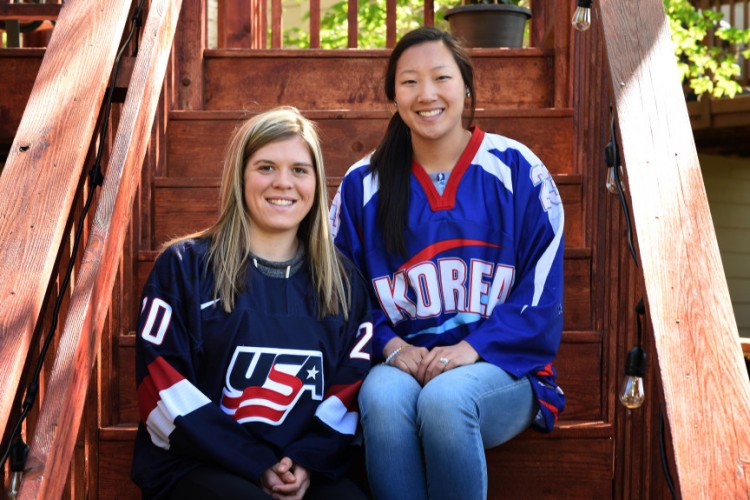 Hannah Brandt was devastated. After years of hard work, she was passed over for a chance to play for Team USA at the 2014 Winter Olympics in Sochi, Russia.

“It sucked,” she said. “I used it as motivation, though. I took it as, ‘Well, I have to get better at some things and I’ll work on that and be better the next time around.’ ”

That mindset paid dividends as Brandt, who starred for four seasons with the Gophers, was recently named to the the U.S. women’s national hockey team in advance of the 2018 Winter Olympics in Pyeongchang, South Korea.

She won’t be the only person in the family representing their home country next year. Her older sister, Marissa Brandt, will lace up the skates as well, except she’ll be playing for South Korea when the puck drops.

Sitting on the couch in the living room of their parents’ home in Vadnais Heights, the Brandt sisters certainly don’t look like they’re related.

Hannah is a mixture of father, Greg, who is 100 percent German, and mother, Robin, who is 75 percent Danish and 25 percent Swedish. Marissa, on the other hand, is 100 percent Korean, adopted by the family when she was 4 1/2 months old.

Have a conversation with the Brandt sisters for more than a few minutes, though, and the subtle glances and finishing of each other’s sentences are a dead giveaway that they’re sisters.

That said, Marissa’s being adopted — and, more important, being adopted from South Korea — is an important part of this story. Because it’s the host country for the upcoming Olympics, South Korea gets an automatic bid for team competitions. In any other scenario South Korea wouldn’t have qualified. Thus, it’s hard not to think the setback for Hannah from a few years ago was part of a much grander plan.

“It’s unbelievable the way it’s worked out,” Hannah said. “I’m going for my first time. She’s going for her first time. That makes it even more of a dream come true.”

After years of infertility, Greg and Robin weren’t sure they’d ever be able to have children.

“We had been married for 12 years,” Robin said. “We decided we were going to adopt.” Because Greg’s sister and brother-in-law had adopted two boys from South Korea, it seemed like a natural fit to adopt from the same place. “We thought it’d be great,” Robin said. “That way she would have cousins.”

About two weeks before Marissa was set to arrive, they found out Robin was pregnant. There was a mix of emotions. While they were obviously excited about the pregnancy, they had also experienced a lot of disappointment leading up to that point.

“We approached it like Marissa coming over was the real deal,” Robin said. “Then we started to focus on the pregnancy as it got farther along.”

Ultimately everything worked out, and about six months after Marissa arrived, Hannah was born.

“It was a lot to take in,” Robin said. “After trying for so long, we got two babies in six months.”

Hannah and Marissa were actually figure skaters before hockey players. Hannah started gravitating toward hockey when she was about 5 years old, and Marissa followed a couple of years later.

“I think she kind of got sick of coming just to watch me,” Hannah said.

After that, the Brandt sisters pretty much played on the same team through their time at Hill-Murray.

“I remember being sad my senior year at Hill-Murray because she went away to college,” Hannah said. “That was the first time we hadn’t played together.”

“It was the right path for each of them,” Robin said.

Greg and Robin never missed a game. Sometimes they would go together to a couple periods of Marissa’s game and then race out to hit the end of Hannah’s game. Other times they would divide and conquer.

Hannah and Marissa also tried their best to get to each other’s games.

“I made it three of the four national championship games,” Marissa said.

What about that national championship game she missed?

“That was the only one I lost,” Hannah said.

Not long after Hannah won her gold medal, Marissa accomplished the same feat.

“Her games were on a YouTube channel so it was really easy to watch,” Hannah said. “We basically won our World Championships within six hours of each other. You can’t make that stuff up.”

Hannah’s path to the international stage was pretty cookie cutter. She was a big-time recruit out of high school. She went on to star in college. And Team USA came calling shortly after that.

Marissa’s path was more circuitous. She was contacted during her senior year at Gustavus by South Korean goalie coach Rebecca Baker.

“She did some work with Bethel and we played them a lot,” Marissa explained. “She must’ve been watching video and noticed me. … It somehow got around that I was South Korean, and she reached out to me. A couple days after that, I was contacted by the (South Korea) team manager and she was like, ‘Do you want to come out to South Korea for a tryout?’ I was like, ‘Yeah, I will.’ ”

Marissa graduated from Gustavus and about two weeks later hopped on a plane to South Korea. It marked the first time she’d been back to her home country since she was adopted.

“I didn’t know anybody there, I didn’t know the language, I didn’t know anything,” she said. “It was kind of terrifying. I was like, ‘How am I going to survive here? I don’t know what anybody is saying.’ I got there and ended up going to the tryout and they must’ve liked what they saw and I’ve been going back and forth ever since.”

After her tryout, Marissa had to get citizenship in order to officially be a part of the South Korea roster. It took five months to finalize everything, she said, before she was officially eligible.

Her first-ever international competition was actually the Division II, Group A World Championships. She was gone for four months and only recently returned home.

“It was a lot of FaceTime because my mornings were their nights,” Marissa said. “We worked it out that way. That was the longest I’ve ever been away from home.”

Her next trip will be even longer.

As far as the Brandt sisters playing against each other, it’s highly unlikely. They will be in separate groups, and in order for that to happen South Korea will have to pull off a couple miraculous upsets.

That said, the fact that the Brandt sisters will both be there is more than enough for the family.

“I can’t even explain it,” Robin said. “It’s something Hannah has always been dreaming about. And with Marissa getting to go, it was like an extra bonus. Maybe this was how it was supposed to happen.”

“Unlike my sister, I never really dreamed about going to the Olympics when I was a kid,” Marissa said. “It’s an amazing opportunity, though, and I’m excited to be able to enjoy this experience with her. I’m also lucky it’s in my home country, because then my family can experience where I came from. It couldn’t have worked out much better.”

This article was reprinted with full permission from Dane Mizutani and Twin Cities | Pioneer Press.

Why Talking About Adoption With Children is Important