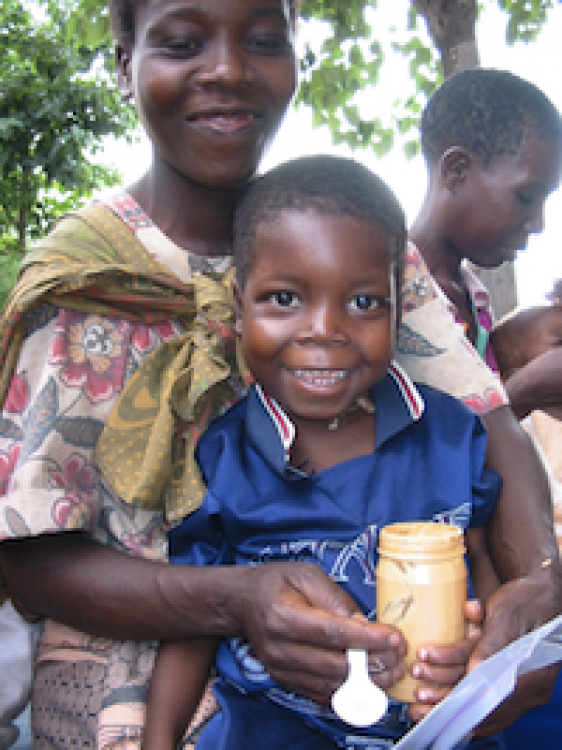 Sometimes, the answer to something so monumental and seemingly insurmountable can be as small as a peanut.  In the ongoing struggle to reach millions of children with lifesaving treatments to combat acute malnutrition before they die from the effects, a peanut is precisely what this world has been looking for.

Project Peanut Butter was founded by Dr. Mark Manary, M.D., a pediatrician who moved to Africa in the 1980s to work in a rural hospital in Tanzania.  He spent the next ten years between the United States and a handful of countries in Africa studying the effects of malnutrition on children as well as whether or not the traditional method of treating malnutrition at the time (hospital based care and milk based formula) was enough.  In the end he found that the recovery rates for children with malnutrition had not changed during the 15 years he studied. Only 25% to 40% of the children recovered from the devastating effects of starvation. Severe Acute Malnutrition (SAM) is the number one killer of children under the age of five-years-old across the globe.   As defined by the World Health Organization, the symptoms of SAM include a very low weight for height ratio, visible severe wasting, and/or by the presence of nutritional edema.   An estimated 20 million children suffer from SAM, and it contributes to the death of more than 3 million children a year.  Without proper treatment those who do survive will live with major health complications affecting both their cognitive and physical health.  Children living in south Asia and sub-Saharan Africa are the ones most affected by SAM.  Chronic poverty coupled with limited access to nutritious foods and nutrition education are two of the main reasons SAM exists.

To Dr. Manary, the staggering numbers of children dying because of starvation was unacceptable.  He moved to a Malawi village for 10 weeks and studied and observed the people.  He studied what the people of that remote village could interject into their everyday life to combat malnutrition.  His conclusion was that ideally families need their children to be treated through a home treatment that wouldn’t take mothers away from their families for weeks on end while their sick child was in a clinic or a hospital being treated through the traditional method.  He also concluded that because of the remoteness of the villages the therapeutic food administered had to have something that didn’t spoil, didn’t need to be cooked, was easy for mothers to give in small amounts to their child at home, and finally, that was energy dense. Over a period of several years Dr. Manary tested various formulas with thousands of malnourished children through controlled clinical trials within Malawi. The food became known as Ready-to-Use Therapeutic Food (RUTF).  RUTF is an energy dense, peanut butter like paste, but it is more than just peanut butter. It consists of roasted ground peanuts, powdered milk, vegetable oil, sugar, and vitamins/minerals.  Its intended use is for children between 6 months to 5 years of age.  The home setting was also a key factor in healing malnourished children.  Before, it was necessary for mothers to bring their sick kids to crowded hospitals/clinic, where they received the milk-based formula.  The sense of empowerment that a women could provide her child with a life saving therapy without having to leave home was huge. In the end, the results, according to Project Peanut Butter’s website were, “striking: 95% of these children recovered!”

Project Peanut Butter was officially founded and began producing food in Malawi in 2004.  In 2007, the United Nations, World Health Organization, and World Food Programme recognized RUTF with home-based therapy as the standard of care for severely malnourished children worldwide.

Where does the peanut paste formula come from?  In several locations, locally.  One of  the most unique aspects of this organization is that the RUTF formula is produced in the country where it is needed and most of the ingredients are also produced/grown locally.   The project not only heals children but it supports local economies and builds stronger communities by providing jobs for farmers, factory workers, administrators, nurses, health care aids, drivers, and others.

“It’s all run purely by Malawians. It makes us happy and proud that we are able to produce this product, which is serving our own Malawian child.“- Liyaka Nchilamwela, former Factory Manager, PPB Malawi Currently Project Peanut Butter has functional factories in Malawi, Sierra Leone and  Ghana.  In Sierra Leone, PPB has treated an estimated 75,000 children since 2009. Besides producing the product, Project Peanut Butter operates about 20 mobile clinics in southern Malawi, where PPB nurses assess children for malnutrition and provide the life saving treatment to those who are qualified.  If a child is diagnosed with acute malnourishment, the mother is given a two-week supply of RUTF that the child may eat at any time during the two weeks. Bi-weekly check ups are encouraged and at that time a new supply of food is available if the child hasn’t fully recovered.  Typically, full recovery takes 4-8 weeks.  Since 2004, PPB has treated an estimated 500,000 children in Malawi through their mobile clinics as well as distributing it though UN agencies and other customers working in the field. In addition, Project Peanut Butter provides support to organizations in The Philippines, Somalia, and Kenya.

“I am grateful to all the people working to make RUTF available. My children are alive thanks to it.”- Aida, mother of Pilirani, successfully treated Spring 2009.

Project Peanut Butter offers several ways to become involved.  They receives a large portion of their funding from grants and private donations.  Targeted donations are accepted to provide life saving treatments to one severely malnourished child for $35.00 on up to treating an entire village of malnourished children for $1,000.00.   They also offers the opportunity to provide ongoing support through a monthly donation that will be distributed where needed most.  Visit the Project Peanut Butter website for ways you can get involved today!