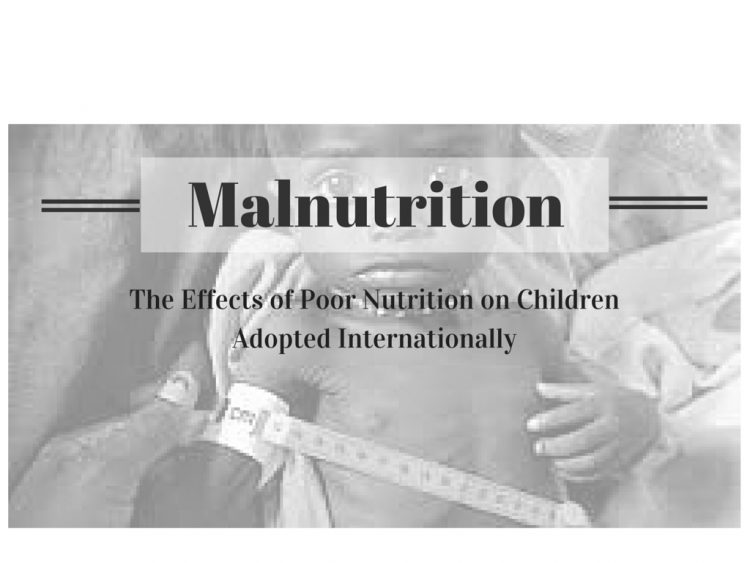 “Poor nourishment” or malnutrition is something that can be seen from all referring countries but seen most often from the African continent. It is frequently seen from developed nations such as  Korea as well as from China and Eastern Europe, though a greater level of standardized care systems are seen in these countries. The simple fact is: kids don’t grow well in orphanage care. They often enter institutions from a background of abject neglect, poverty or other factors that lead to poor nutrition and growth stunting. If the lack of calories and stimulation persists, then children will have what we call “failure to thrive.” While the majority of malnutrition worldwide is mild or moderate, severe malnutrition plays a role in 50% of under 5 year-old childhood deaths.1

There are three kinds of serious protein-energy malnutrition (PEM): marasmus, kwashiorkor (KW) or marasmic kwashiorkor. Marasmus represents a calorie deficiency versus KW, a protein deficiency that can result in bloating or edema or a “full” appearance that can be deceiving since it is not a well nourished child but rather a child who has fluid build up as a result of poor nutrition. Children under 1-2 years of age are at particular risk after weaning from breastfeeding. They can develop infections and diarrhea and have more difficulty finding food on their own or competing with older children for the available food.

Weight in and of itself has not been linked to long term potential, within a certain range. However the main question when you have a child with significant malnutrition, how much stress did the body endure? Will the cognitive and medical potential be normal?

Multiple studies of malnutrition show some effects on IQ. With moderate to severe malnutrition, different types of learning called verbal and spatial IQ can be affected. The total or full scale IQ can also be affected and as a group, IQ is lower by about 15-20 points in the group that had a history of severe malnutrition.2,3 If a child started out with the potential for IQ in the 120’s, then you would still be above average even if you were one of the children whose IQ was affected. However if the child’s potential was meant to be 85 then a 15-20 point decrease would increase risk for significant cognitive issues. Children who have not had the food for their brain to develop normally may also have problems learning such as problems paying attention.4 If weight alone was affected and has caught up in a supportive environment, then the potential is likely going to be normal. If the height has been affected it suggests that the malnutrition is chronic and may result in longer term academic challenges and medical complications. Poor growth of the brain further increases the risk of cognitive disabilities

The younger the child at the time of referral, the more difficult it is to know what the future will hold. The main questions are the following:

1. How is this child doing now?
2. Did he lack calories for a long time
3. Was his weight extremely low? Did he stop growing taller? Did his brain stop growing?
4. How did he/she grow once they had the food and care needed?

These are things to ask a doctor who specializes in the care of international adoptees.
While there are differing opinions on socioeconomic or other factors for recovery, many studies support interventions such as an enriched environment and educational support which may help improve scores and IQ measures over time.5

*Malnutrition is common in referrals, but severe malnutrition is not frequently seen outside of Africa.
*Mild forms are common and are likely to recover quickly once in a supportive environment.
*Consideration should be given not only to the nutritional rehabilitation of the child, but also the long term planning for potential educational behavioral support.

Half the Sky: Giving Orphans a Second Chance