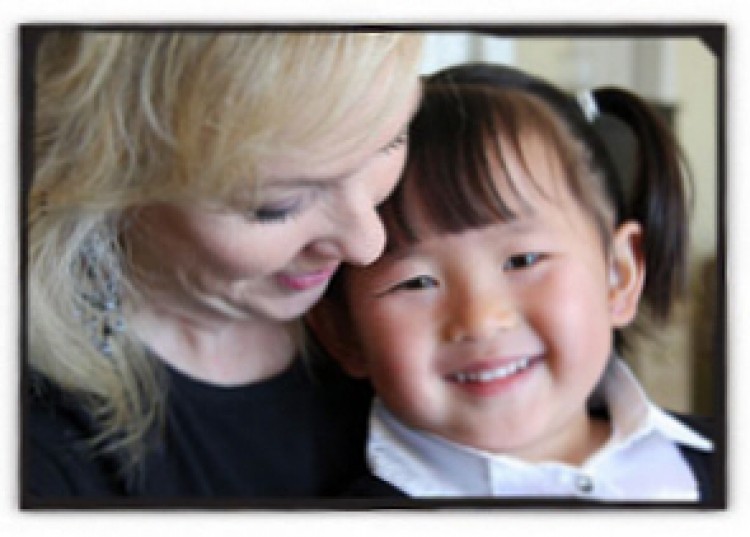 LiLi wore pig tales with a tiny pink pom pom on one side of her head. In a small purse, she carried every picture, every note her family had mailed her.

Mike and Melissa Adkins waited for months and traveled halfway around the world for this moment. She was beautiful. She was the most beautiful little girl Mike had ever seen. He wanted to bury his face in his hands, but instead, he grabbed his camera and snapped a picture as the next scene played out through the lens.

He wanted to bury his face in his hands, but instead, he grabbed his camera and snapped a picture as the next scene played out through the lens.

His wife Melissa walked up to LiLi with a big smile and pressed her hand against her heart. I am going to be your mother.

Melissa had always known that she would adopt. She knew before she ever met her husband. When she did meet Mike, and he agreed to share her dream, they decided that one day they would bring home a little girl and name her Lily.

It was a few months after they decided to adopt internationally through Buckner that Melissa found a message in her inbox. One little girl from China with special needs was waiting for a family. Her name was Chinese, but the pronunciation was the same: LiLi.

I yelled for Mike and Eston to come in, Melissa said. We knew from the beginning that we were going to adopt a special needs kid, but we didn't know what type of ailment it would be. When we were notified about a girl named LiLi with hepatitis-B, I knew that it was her.

As soon as they learned about LiLi's ailment, the Adkins began researching a disease that they were told could lead to premature death. They tell us its incurable, but we don't buy it. It is all internal and there are no symptoms.

On Feb. 12, 2007 Buckner told the Adkins that LiLi would be their daughter. But while they celebrated the news in Texas , LiLi was living in a Chinese foster home where she had grown attached to her caregiver. So at first the adjustment was hard.

As she grieved for her (foster) mom, she bonded with me, Melissa said, recalling their few days together as a family in China . We'd get pictures of her foster mom and kiss her and she would cry. Sometimes she'd lock her hands around my neck and just look deep into my eyes.

It's only been six months since LiLi moved in with the Adkins, but already her English is clear and she's forgotten all the Mandarin she knew. When Melissa or Mike call and one of their children answers the phone, they can't tell if it's their 7-year-old son Eston or LiLi.

Eston and LiLi are buddies. They whisper in each other's ears and play together. They have the same circle of friends.

It was hard to believe that we were flying to China and would come back with someone else, Eston said. It was fun to think that I was going to have a sister.

Before LiLi, Melissa said she spent a lot of time talking to Eston about a new sister. We did everything we could to prepare. So he never felt jealous.

Mike said they taught Eston to come to them about his feelings and express what he was thinking.

When it comes to adoption, kids can take offense to that, he said. As parents, we can give tools to help them step outside their selfishness.

Eston was always gentle with his sister, even when she was rough, because they prepared him for it, Mike said. It was strange for LiLi because she had a foster brother in China who was mean. At first, she would always watch Eston out of the corner of her eye and defend herself from him even when there was no need. Now the two are inseparable, sharing toys and friends.

It's like we've had her from the beginning, Mike said. We'd prepared for her for so long.

Melissa added that adopting LiLi was like having a bond with someone you've never met. It's a different kind of birth and it shows who Christ is.