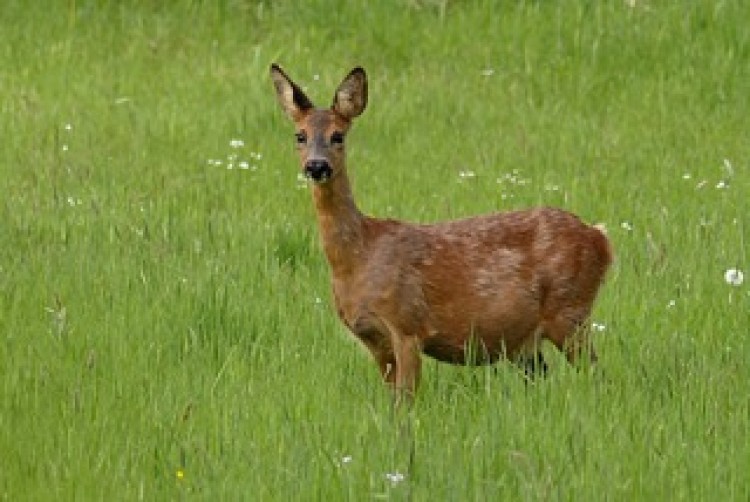 Deer flee in an instant when frightened. One second they are calmly grazing in the forest or meadow, and the next they are darting in every direction, seeking safety. This happens when there is no real threat, for example a branch falling, and also when there is a very real danger: such as a predator or hunter. Because a deer's world consists of very real dangers, he is vigilant, constantly on "red alert."

Deer are always wary of their environment.

Traumatized adoptees are similar to deer. They quickly enter states of "freeze", "flight", or "fight", even when there is no visible threat or demand. This phenomenon stems from their early history of abuse, neglect, institutionalization and non-consistent caretakers.

The adoptee with a history of trauma enters into their new family with an overactive stress response system. The traumatic environment is stressful! The child must worry about whether or not he will eat, be fondled, be beaten and so on. The brain is consumed with survival. In this pre-adoptive environment of chaos, the brain over-develops in the areas of fear and anxiety.

The brain is user-dependent; the repetition of experiences strengthens the brain's pathways. Thus, early experiences have disproportionate impact on how the brain will function for the individual's lifetime. These adoptees, upon joining their family, will enter states of "flight" or "fight" easily and often when confronted in a manner that the brain perceives as threatening. This phenomenon doesn't just go away with enough love or time. The brain's pathways must be re-wired over time, with consistent and long term nurturing parenting.

While chronic abuse can result in the overactivation of the stress response system, neglect can result in other problems. Neglect means that the child's physical and psychological needs go unmet. In order for the brain and thus, the child, to develop, he needs stimulation and acknowledgement. If these elements are not provided, the basic neural pathways that were ready to grow through experiences with care givers, withers and is less responsive. Overall, the child who isn't nurtured, may not know how to have reciprocal, affectionate interactions. Again, the brain repeats what it learns. If all it learned is to be alone in a crib, then this is the pattern the formerly neglected son or daughter may re-play.

Certainly, the furthest thing from most adoptive parents' minds, when accepting a child into their home, is thinking about how their new son or daughter's brain is going to respond to their caring interactions and their discipline. Yet, today's adoptive families need to understand some "brain basics." In essence, adoptive mothers and fathers want to learn to "parent deerly." Angry reactions and lengthy time-outs, remind a child's brain of its abusive and neglectful past.

An adopted child from an institutional setting or fostercare background will respond differently to these "normal" parenting techniques  than does a typically-developing child. For example, the formerly institutionalized child is happy in his room. He seeks to disengage from the family. When stressed, his brain wants to go into "flight."

In another example, Mom asks a simple, "Where is your backpack?" "Did you eat the last yogurt?" "Why did you take your sister's necklace?" and the child shuts down or begins to yell! In return, Mom escalates, "I'm talking to you!" "Don’t argue with me!" Many parent readers can relate to this scenario. The problem is, your child reacts to simple questions or commands as if they are attacks. A post-institutionalized child is so hyper-vigilant and on-guard that they feel instant panic when a parent's focus falls upon them. Their brain cannot quickly or calmly respond. This involuntary reaction can appear to a parent as obstinance, anger, ignoring of the question, and disobedience. A child is completely unaware of why he or she responds this way, and unable to correct the behavior on their own.

In order to "parent deerly", moms and dads need to leave the anger and the consequencing mentality behind. Parenting the traumatized child is about parent's reactions. This is certainly more easily said than done! Yet, calm exchanges are essential to healing the child who experienced complex trauma prior to arrival in the adoptive family. That is, conflict sends the child deeper into flight or fight: more negative behaviors occur in these states.

Calm, cool exchanges (with a gentle voice and gestures) between the parent and child lend to less behavioral difficulties. Under these circumstances, the brain can begin to reorganize itself, and the child heals. The family has a peaceful, emotional climate.

Each parent needs to identify ways to reduce the intensity of their reactions toward their adoptive son or daughter. Tips for accomplishing this seemingly enormous task include:

Author Bio: Arleta James, MS, PCC, has been an adoption professional for a dozen years. She spent several years as a caseworker for the Pennsylvania Statewide Adoption Network placing foster children with adoptive families and then as the statewide Matching Specialist. She now works as a therapist providing services for attachment difficulties, childhood trauma and issues related to adoption. She was the 1999 Pensylvania Adoption Professional of the Year. She is currently on staff at the Attachment and Bonding Center of Ohio. Arleta's website is: www.arletajames.com

Arleta is the author of: Brothers and Sisters in Adoption: Helping Children Navigate Relationships When New Kids Join the Family

Supporting and Understanding the Adoptive Family

When Adopted Toddlers Reject Their Parents