Adopting Our Son with Hepatitis B 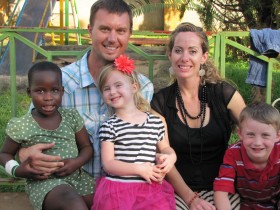 This time last year we were packing some goodies to send over to Uganda to our daughter for Christmas, yearning and wishing she were with us instead. We had seen pictures of her and knew her name, and were waiting for the call from our adoption agency, Carolina Adoption Services to say we had received a travel date.  I remember being sad as I packed the small books, sequin pocketbook, stickers, and dress up jewelry.  I wrote a small note in the back of a picture album with the first photos she would ever see of her forever family.  I wrote, ‘We love you Sharon, and we pray everyday we can come meet you very soon.”

Very soon turned out to be about three months later, on March 18th of 2014.  Our family of four:  my husband, four year old daughter, six year old son, and myself journeyed to the country of Uganda in East Africa to meet the little girl we had been praying for and talking about for years.  We had never been to Africa, and when we got there, it was pitch dark, near midnight.  I felt like that fit our whole adoption experience well as this path had been one that was walked by blind faith from the beginning.  Our faith had been the driving force of wanting to welcome a child who needed a family into our home.  But on this dark night I couldn’t wait until sunlight, for that meant I would finally meet my baby girl!

Before I knew it, we were on a tattered couch inside the orphanage, waiting for our little girl to walk through the door.  An auntie appeared holding the hand of a scared, slow moving precious three-year-old girl, freshly bathed and in clean pink faded terry cloth pajamas.  She walked over to us and we embraced her, and told her God had sent us to come get her and love her forever!  She opened her mouth to say “hi,” but no sound came out.  My husband now tells her this story, nine months later and she cackles out loud when he mimics her timid “hi” the from that day.

The following four weeks were spent getting to know Sharon, going to Ugandan court, and awaiting a formal guardianship order from the judge.  We spent so many wonderful afternoons under the shade of a huge avocado tree in the courtyard of our apartment.  My two biological children’s lives were changed forever as they fell so in love with their new sister, and also as they spent so much time at the orphanage with the other children.

There were huge challenges such as occasional sickness, homesickness, and culture shock.  For example, the people we relied on for transportation were always a few hours late, even for our court hearing!  The best advice we can give anyone adopting from Uganda or any African country is to expect delays in both daily life, but also in every step in the process.

After a month in country, my husband and children needed to get home.  We were still waiting for our guardianship order from the judge, so we still didn’t have custody of our daughter.  Saying goodbye at the airport was the hardest thing we had ever done.  We didn’t know how long it would be until Sharon and I would be able to come home.  We hoped for about three more weeks.  It turned out being two more long months.

About one week later we received the documents stating we were Sharon’s legal guardians! I was finally able to go pick Sharon up from the orphanage for the last time ever.  We faced timed my husband and children back home in the states on the way to our guesthouse.  Sharon was so happy.  I was so happy.  Our family was so happy!

The other advice we can give adoptive parents in Uganda or Africa is to lean on their faith.  God provides.  Even though our family was separated for two months, He provided the people we needed to help us.  I was able to stay at a guesthouse for adopting families close to the US Embassy run by American missionaries.  I would never have made it without these people.  Our family and friends back home helped my husband as he juggled a job as a traveling chaplain and his job as Mr. Mom.

Every night Sharon would try to understand with her three year old ability when we would be able to go home to see her daddy, bubby and sissy.

“Tomorrow? “ She would say.

“Not tomorrow, but soon.” I would say.

Then we would pray God would help us be able to go home “but soon.”

The delays we faced were not much different from what all other adopting families in Uganda experience.  Many families choose to make two separate trips.  We strongly recommend doing this, for waiting on tomorrow for weeks for the guardianship order and the passport is a standard issue.

Finally “soon” became “today!” Three months to the day that I landed in Uganda, I stepped on a plane bound to America, with my new little girl, who was so anxious to see her family.  When we stopped in Belgium I spoiled her with her first Starbucks Frappichino!  She had no idea what lay ahead in America!

When we walked off the plane in Charlotte, my son tackled hugged me onto the floor and my daughter jump hugged her sister Sharon.  My husband and I shared an embrace and then he slipped my real wedding ring back on my finger, which he had replaced some missing diamonds as a surprise gift.  I put the ten dollar band I had worn for three months in my African bag.  We snapped a family picture, then we walked to the escalator to be welcomed by about thirty family and friends with signs, gifts, and balloons to shower on Sharon.  I was in a haze but hugged and thanked everyone for coming.

It has been nine months now since we’ve been home.  My husband and I say that Sharon has transitioned extremely well, but it has still been extremely difficult.  Sharon is a sweet mannered child and her coping mechanism when she is unsure is laughter, (how cool is that)!  The hardest change is the loudness and chaos that comes with three joyful, active, healthy children in our home.  Sharon is going to preschool three times a week and her language and vocabulary are improving as the months roll by.

We are very thankful for other adoptive families in our community to turn to, even if it is just to talk things through and know we are not alone.  God is good to give you friends who He’s called on similar journeys.  We recommend other families to reach out to others who have adopted so that they can get the emotional support they need.  Adoption is a journey full of immeasurable joy, but also of great stress.  Being aware of this will help deal with the stress so you can keep your joy.

It is so fun to see the light in Sharon’s eyes as she has counted her blessings of having a family leading up to Thanksgiving, and now piecing together the meaning of Christmas every night of Advent.  My favorite times of the day with her are when it is just the two of us as we snuggle for naptime and bedtime.  I am so thankful as I hear her tell me “Goodnight, I love you Mommy,’ in her thick African accent as she squeezes me tight.