Growing Trust by Saying "Yes" to Your Adopted Child 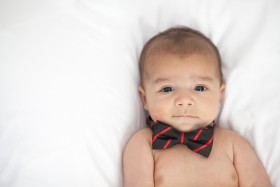 Our Adoption: A Redemption Story

My husband and I have always had a heart for adoption. Two years into our marriage we were ready to add a child to our happy family. We had no idea how hard the journey would be for us. Within a few months we became pregnant, but to our surprise, only a few short weeks later, complications arose and we said goodbye to our first child.

We soon became pregnant again with our second child. This time, a little more reserved, we headed to the doctor early knowing there could be risks. We learned that day that what we feared was true-- our baby was not going to make it to term.

As time passed we opened ourselves up to the consistent conviction calling us to step out in faith and adopt. In ways that only God can orchestrate, we received enough money through grants and personal fundraising to give our process a bold beginning. We completed our home study and fully expected to meet our child shortly after. But the waiting game began to drag on and impatience crept in.

The next few months were a blur. We moved out of state following a call to ministry and shortly after completed international and domestic home studies.

A little more than a year after we moved, we were notified by our social worker at Embraced by Grace Inc. that there was a birth mother looking for a very specific adoptive family for her baby. We asked the social worker to show our profile to the birth mother. A few days later we received a call that the birth mother had chosen us, and within a few hours we were able to meet her over the phone!

Our five-year journey was finally beginning to have some resolution, and God showed himself in the redemption of our pain and our birth mother's broken road. Becoming a new believer herself and choosing to give life to her child allowed her and us to see God was with all of us during our very darkest times in life and how He had chosen this very birth mother and this very child just for us.

We were invited by our birth mother to be present for our son's birth. Our sweet little Isaac was born on December 23rd, the exact due date our very first child was supposed to be born only five years earlier. Four days later, we had him home in our arms praising God for His redemption story in our lives. Though the road was not easy, we are so blessed to see how God uses us when we give our story over to Him and allow Him to be the author.