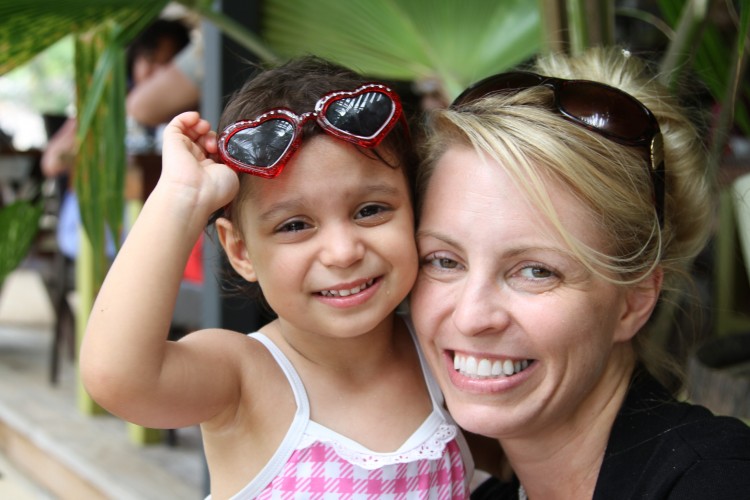 During the first couple months of becoming an adoptive mom, there were many times I said “yes” to my daughter when I ordinarily wouldn’t have done so.

For example, I said yes to: taking a bath in leggings, taking a bath with socks on, taking a bath fully clothed (luckily this stage passed fairly quickly!), filling balloons with air and a little water and playing hot potato in the house (surprisingly they didn’t burst!), watching the same show at the same time as her brothers except in different rooms, mixing ranch and ketchup and putting them on rice or chicken, eating a whole apple with a spoon, sleeping in her room with her on a mattress on the floor (because she was scared), licking flour off her fingers, carrying her around everywhere and lots and lots of piggy back rides!!

I tried to say “yes” as much as possible. If it wasn’t unsafe, unhealthy, or ethically wrong and I didn’t have a good reason to justify telling her “no” I said “yes”.

But it wasn’t always easy. I often had to come up with a way to turn a “no” into a “yes.” Sometimes “yes” was attached to a disclaimer like, “Yes, you can play with the water balloon in the house as long as you clean up the mess if it bursts.” or “Yes, you can take a bath with your clothes on as long as you still wash your whole body.” Other yeses may have sounded more like this, “Yes, you can have a piece of candy, but we’re about to eat dinner, so I need you to wait until after we eat dinner to have candy. Go ahead and sit it next to your plate so you don’t forget about it.” In order to say “yes” more often I had to be much more open-minded, use good judgment and have a positive attitude. I had to remember that it wasn’t about me and my comfort level. For example, I wouldn’t love it if a balloon filled with water burst on my floor, but it is just water and it would dry. You only live once, right?

By saying “yes” more often my child didn’t become an unruly, spoiled or an over indulged child. But rather, I was able to foster attachment, promote trust and give control back to my daughter. Children who join a family from hard places generally do not chose to leave their birth family, birth culture, or in the case of international adoption, to move half way around the world to join a family who looks and acts nothing like them. Saying “yes,” is one way to fill your child’s metaphorical “trust bank” as described by Karyn Purvis, David Cross and Wendy Sunshine in The Connected Child.

Children from hard places have a large deficit of “yes” responses. The authors explain that with these children, “it takes many, many deposits into the trust bank to make headway and help him feel truly safe.”

I did not let my child do everything she wanted or get everything she asked for. I still was able to establish clear rules and boundaries. There are times and places where a “no” answer is non-negotiable or opportunities to teach a child to accept “no.” Physical violence is one example of a time where there isn’t any room for compromises. However, if you have to say “no” be prepared to give your child a reason why and offer an alternative. For example, “No, you cannot play with the ball in the middle of the street because there are cars driving and it is not a safe place to play. Let’s play in our yard or at the park instead.”

Doggie Doesn’t Know “No!” is a book written by Cindy Lee, which incorporates the Trust-Based Relational Intervention® principles by Purvis and Cross. In the beginning of the book, Doggie lives on his own and he steals food, sleeps on the ground and uses the bathroom where ever he wants. Animal Welfare finds Doggie on a really cold and snowy day and he goes to live with a man. Since Doggie had never lived in a house before, he doesn’t know the rules and is told “no”. The man teaches Doggie how to live in the house and make good choices by showing Doggie the correct behaviors. By the end Doggie says, “Accepting no is hard to do even though it’s good for you.”

Cindy Lee provides additional parent instructions in her book and includes examples. She suggests that the more times you say “yes” to your child, the easier it is for them to accept “no.” For example, Lee shares that when a child asks for a cookie on a day that they have already had to many sweets, parents should remind the child of the times where they were told “yes”. They’ve had many sweets and this time she needs to accept “no.” In general, children do not like to be told “no,” so it is best to practice and role-play sample scenarios. Consistency and repetition are key to learning a new behavior. As Aristotle said, “For the things we have to learn before we can do them, we learn by doing them.”

Our Adoption: A Redemption Story