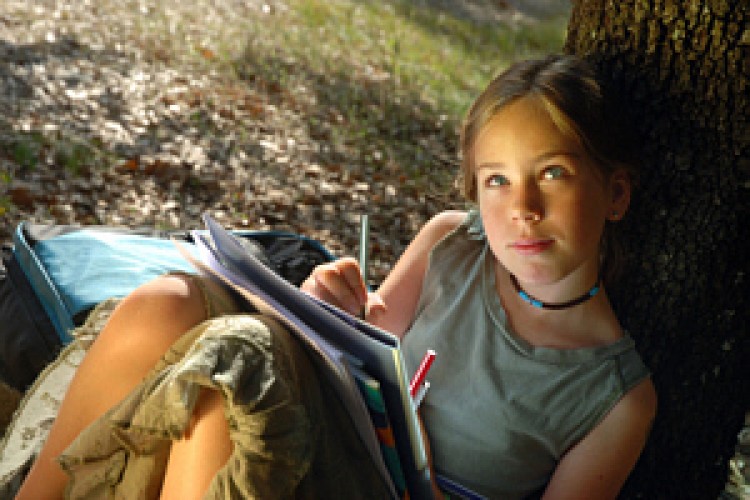 I never say we're going to learn our culture, but the kids learn it because they're living it. In our journal writing circles I don't necessarily say, "we're going to explore our identity", yet most of the time this is what we do. Our classes are held outdoors under a bead-blue sky, weather permitting. We stretch out on the grass, a breeze blowing. I remind the group of middle school kids gathered not to worry about spelling or punctuation, the goal is to write as fast as they can, and produce a page or two or three of rough draft uncensored thoughts.

To jumpstart the kids into writing I lead with a question.:

"What are a few things about yourself that you think other people don't understand?"

Then I add, as I do every time I work with students young or old, "Don't worry if you veer off the topic. Just write anything that comes into your mind." After each person has had time to write down thoughts, we go around the circle and anyone who wants to, reads what they have written. Confidentially is always a moot point. So, sometimes there are those who want to crumple up the paper after they have written, before or after reading aloud. That's OK. The purpose is to tap into our minds, and see what might be lurking in our subconscious. We don't need to save what we have jotted down or turn it into a monument.

Writers are visionaries. "We routinely practice a form of faith, seeing clearly and moving toward a creative goal that shimmers in the distance," author Julia Cameron reminds us. As a mother, a writer, and an instructor of journaling and creative writing, everyday I practice this form of faith. As adoptive parents with the goal of supporting our children's developing sense of identity of who they are, and where they come from, we also routinely practice faith by trusting that we are doing our best job of helping our kids find avenues to explore and launch their feelings.

Yet silence is silence and nothing about it is golden if we allow ourselves to believe children who don't talk about adoption, or racial teasing or racial stereotyping, aren't dealing with these issues. Transracially adopted children and teens face additional pressures.

The goal therefore, in addition to providing occasions for open dialogue with parents, is to offer a safe harbor where our kids can air their feelings within a peer group of adopted friends. Only another eleven-year-old who is adopted knows what it feels like to be eleven, and be adopted. And only another person adopted transracially knows what it's like to have that dynamic of adoption braided in.

The most effective journaling sessions are when the rules are firm. With kids and teens it's generally best to set a "no parents allowed" rule. Generally it is best to set a no parents allowed rule for anybody writing down their private thoughts, even for those of us who are over 50. No criticizing, no making fun of anything anyone writes, with a focus on compassionate listening offers the best chance for kids to peel back the layers of their personalities, and figure out what they really want to say, and what questions they want to ask.

The success of a journaling circle is that members of the circle have common bonds and emotional links with each other such as having been adopted transracially, growing up Native American, or being mixed race. I keep the majority of the writing topics open and flexible and not centered on adoption, ethnicity and identity. Slants specific to those topic areas spring up automatically and will present themselves in a far more creative light than if I'd forced the subject. Yet usually I add one or maybe two writing topics in specific areas common to the group experience.

Recently with a group of teens adopted from China and Korea I opened by saying, "Name three ways in which you think of yourself as being typically Asian, and three ways in which you don't." I had a second specific theme to suggest they write on later on, except the group bent over their note pads and wrote fast, like the wind, and they spent the rest of the hour talking about a spin off comment, specifically, "What would you say if you could tell the kids at school exactly what you are thinking when they ask: but where are you really from?"

Our purpose of journaling together is born of friendship, and not a therapy session where the focus is on identifying problems and finding solutions, so I find it is best to let the writing flow naturally. Letting go of expectations is a must. As a lover of the written word, I want everyone to fall passionately into writing.

But sometimes after a few minutes of writing everyone gets looped into a conversation. Which is why I follow journaling sessions with kids with a "Talking Circle" from my own American Indian oral tradition. The traditional way, which is observed when Native children gather for the purpose of a "Talking Circle" is for everyone to sit in a circle, of course. One person begins talking from their heart, and they hold the "talking stick" while speaking, and have the opportunity to talk uninterrupted. When the person speaking is finished, he/she passes the talking stick to the next person. We are supportive listeners and refrain from offering suggestions or finding fixes because this cuts off the flow of conversation, respect and trust.

When necessary I begin the dialogue but I don't ride herd, my role is to act as guide, get the group going, and then let them drive. Even those kids who stay at the fringe of the group, or appear withdrawn or quiet, are still observing and learning from the group dynamics.

I've never facilitated or sat in any of the circles my son and daughters have participated in because I wanted them to have a chance to figure out whom they might be without me breathing down their neck or trying to sneak a peek into their minds. Yet I've found when I gave my kids the free space they needed to explore, we effortlessly communicated on a deeper level, often when I least expected it. For example my son liked to tell me his deepest thoughts while I sat in five o'clock traffic, waiting to make a left turn. Looking back I know by timing it perfectly he was guaranteed I would listen, and not interrupt what he had to say.

As hard as it was to let my children go off alone to teen adoptee groups, (and for my kids this also included the annual KAAN conferences as well as cancer survivor, and siblings of cancer survivor camp intimate discussions) and not have any idea what they were thinking and experiencing it was good practice for me because I felt those exact same pangs of longing and feeling left out when I dropped my daughter off at college and she moved into the dorm. And I felt that way again four years later when she graduated and got her first job, and moved into her own apartment.

Parenthood is about loving and being able to let go, and if we do the growing up right, our children will be blessed with opportunities to think and speak candidly about their feelings, and will walk away from us, one baby step at a time, towards rich and full lives of their own making. And chances are, I've discovered, they will call home often, providing sweet, intimate details of their newfound independence, returning the faith and trust, we gave them so freely.

This article was first published under the title Full Circle in the February/March 2007 issue of Adoption Today magazine. Copyright 2007, Terra Trevor, author of Pushing up the Sky. All Rights Reserved.

The Presence of Absence