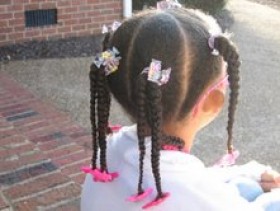 We had just begun the adoption process and were looking forward to the day when we would welcome home our new daughters from Haiti . It was the very beginning of what would become a long, long journey but already The Question had been asked: "What about the hair?"

About that time, an African American friend was visiting in our home and she decided to give me my very first lesson in caring for black hair. She sat her daughter in front of us at the kitchen table and nimbly unraveled one of her braids.

"A simple braid," I thought. "This is something I can do."

I divided the ponytail into three sections and began to weave them together the only way I knew how under her watchful eye. "Stop," she said a little sadly, "You're doing it wrong."

It was at that moment I first realized just how little I understood about African hair. I knew absolutely nothing at all.

The method most African Americans use for a simple braid differs from the one more commonly used by those of us of European descent. Instead of passing the two side strands over the center strand, one weaves them under it.

Recently, I did an informal poll of a group of African American friends and only one of them had learned to braid over-handed. All of them agreed the under-handed technique forms a tighter braid that lasts longer than an over-handed braid.

If you are accustomed to the other method, this one will feel awkward at first but I promise you can do it with a little practice. I did!

The Case of the Chlorine and the Curl