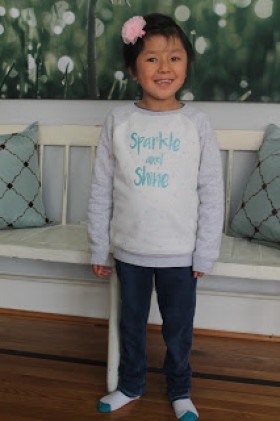 We've been able to ask Jinna Rai more and more about her life back in China, and we recently had a conversation about the people she lived with.

Then I was curious about whether or not she remembered her parents. (She was abandoned when she was about one year old.)

"No," she answered quickly. She pointed at herself and said, "One."

That word "one" gripped my heart.

Even though she spent the last 7 years of her life surrounded by hundreds of other orphans that she developed almost sibling connections with, and dozens of aunts/nannies who cared for her, still she knew she was just one. An orphan. A family of one.

I'm so very glad we have her in our life now. And I'm so very glad she now has us, crazy and loud and imperfect as we are. Today she cried many, many tears because she misses her brothers who are currently in Ohio. Then she begged to go to her grandparents' house, and then she begged to go visit her great-grandmother, who she made a card for. At her grandparents' house, she delighted in looking at all the pictures of her multitude of cousins, repeating their names. On the way home she jabbered on the phone with another far-away cousin she has yet to meet.

Every night she prays before bed, ever since the week she arrived in our house, and she lists all the family members she can think of... usually at least 12 or so. She values family.

This girl who was just a family of one for so long is now part of a large, loving clan.

It's interesting how one's identity is so radically changed by this type of relationship. She "belonged" in her orphanage. She was accepted, she was cared for, she was probably even loved. She was part of a community. But still.... she had a deep-rooted sense that she was truly on her own. Just one in the great sea of life. Being in a family changes all that. That relational status changes our identity. The "belonging" is on a whole different level. The connection is embedded in who we are.

This is what God offers to us when He adopts us as His children. Our whole identity is transformed.

The Church is more than a community. We are more than fellow orphans and care-takers. We are not little islands, little "families of one," needing to remain isolated and misunderstood. We are now part of a large, crazy, loud, imperfect family.... which can be both good and hard at times. :)

But the best news is that this family is Headed up by someone who is NOT crazy and NOT imperfect. He is Love, He is Truth, He is Light.... and someday we will see Him face to face and know Him fully, even as we are fully known.

Share Your Adoption Story: Inspire a family to consider adoption!