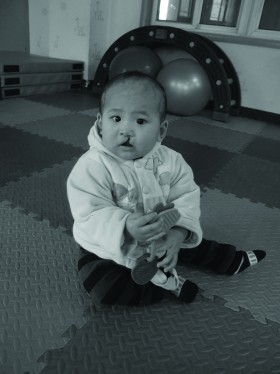 "Most importantly, I think is the change she’s brought to our family. We are learning more and more how to let the little things go and just love each other." Heather, WACAP Adoptive Parent

“Why can’t she just get in her car and drive here?” 5-year-old John was adamant. Along with his siblings Aidan (12), Emma (7) and Teddy (2), he was anxious for his sister Olivia to come home from China.

Eighteen-month-old Olivia joined her family this May, just a year after Heather and Robert, who’d heard two families recommend WACAP, decided to call. “Olivia was always their sister,” the couple says, even before WACAP sent them the photo of the rosy-cheeked, bright-eyed little girl. “We had prayed for her for so long, … had so many conversations [with our kids] about where she was, her culture and how we could pray for her and her family that wasn’t able to care for her.”

Olivia, born with a cleft lip and palate, spent her earliest days in an orphanage, and though her cleft could be surgically repaired, she still waited longer for a family because of her special need. At any time, about 2,000 children from China need families — kids who may have a medical condition or who might be older than others and passed over year after year. For Olivia, being passed over would mean spending those critical early years inside an institution instead of in a family. So when WACAP staff stayed up late one January evening to hear from China’s adoption authorities and saw Olivia on the updated list of children who needed families, they didn’t pass her by.

The couple was home when the phone rang. “We had prayed from the beginning that our daughter would be young, healthy and well taken care of during her time in the orphanage," they say. "When we saw her picture and read her file, we knew our prayers had been answered.” As an overjoyed mom and dad learned about a little girl who loved music (and described as sometimes “obstinate"), Heather remembers thinking fondly, “She’ll fit right in.”

When deciding to expand their family, Heather and Robert were open to adopting a child with a special need. Heather had a background as a nurse, the couple had taken classes and done research, and they felt equipped to support a child with a cleft lip/palate. “There are no guarantees in life, whether biological or adopted,” they believed and so agreed not to “wait years for a ‘healthy’ child, especially when there were children with minor special needs who needed parents.”

The couple had no lack of parenting experience, but Heather had some concern about her daughter’s attachment and also wondered, having been in an institution, what other needs Olivia could have that may be less apparent.

Traveling to China this spring alleviated many worries. They came face to face with the little girl they already loved, who loved to be held, and who did, in fact, love music — something that soothed this uncertain 1-year-old as she processed the new faces of her family. “That first night, it was hard. She was scared and confused,” Heather remembers. “I swayed with her and sang ‘Amazing Grace’ to her while she fell asleep (I still do).”

Olivia arrived at her Texas home to the delight of her four siblings, and somehow managed to find her way directly into the playroom. A month after settling in, she had surgery to repair her cleft lip, with her palate surgery six weeks later. Because these surgeries ideally occur at a younger age to promote speech development, the couple had consulted with a surgeon months before Olivia’s arrival and moved forward quickly. Though feeling secure again took her some time between surgeries, Olivia is growing closer to her family by the day, is beginning speech therapy, and has returned to singing “la la la” each time she hears a song.

When this toddler isn’t adding her touch to the music of family, she’s helping her family see the world anew. “I think [Olivia joining our family] has opened our kids’ eyes to the needs of others, … to the fact that people are people, no matter what they look like. It’s something we’ve always tried to teach them, but living it gives it a whole new dimension,” Heather notes.

She thinks back to a family trip to the store before Olivia’s surgeries. While there, a little girl, about 10 years old, pointed out Olivia to her mom, probably not with cruel intent, but active curiosity. “I wasn’t paying much attention until John (our 5-year-old) said, ‘Her NAME is Olivia, and she’s MY sister.’ To which Teddy, our 2-year-old, said, ‘Yeah, that’s my Livia,’” Heather recounts. “I was so proud of them.”

This article is currently rated 2 stars