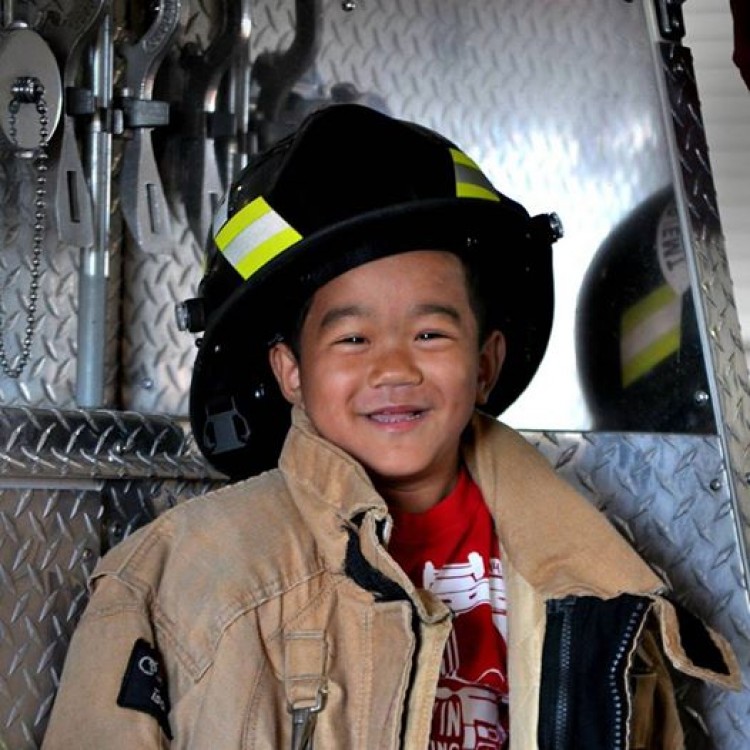 Adopting a sixth child wasn’t exactly in our plans.  We were quite content with the five we had.  Two of our children were grown and gone, the third was about to leave “the nest”, and that only left us with two girls at home.  This seemed perfect!  But God had other plans for us.

We are the G. family.  We are a blended family of three biological sons, two daughters adopted from China, and our sixth blessing, a son from China. When Keith and I married in 1998, my own mother said that he was either a saint or crazy to marry a woman with three sons, two of which were teenagers.  I would rather think that it was my charming personality. But to be honest, I do believe that he might just be crazy.

After adopting our daughters in the early 2000's, we thought our family was complete. Somewhere in early 2012 I started having that feeling again.  That feeling that makes you think:maybe just maybe, there is another child out there that is ours.

Keith and I discussed the idea and he was on completely on board.  I wasn’t so sure, though.  By the beginning of May I knew that it didn’t matter what I thought. God had a child out there for us and he would become a one of us.  Suddenly, the need to find our child was all I could think about.   I contacted Children’s House International immediately.  We had used them for our second adoption and we knew that this was the agency we would use for our third.

Keith and I had discussed special needs that we would accept, age, sex, and country.  We had quite a laundry list of requests when I spoke with our agency.  We wanted a boy, age two to five years old, from China, and we would accept various special needs. My only request was that I wanted him to be able to walk, and I really preferred him to be potty-trained.

I didn’t read the email first.  Instead, I quickly opened up the attachment and fell head-over-heels-in-love with a little, bald-headed boy dressed in a pink coat, and flowered pants.  He was the most adorable boy I had ever seen.  I was so excited to see my new child’s face.

As I began to read his paperwork I knew from the bottom of my heart that this was my son.  His special need was one that we could handle.  The report said he had a limp of the left lower leg.  We could also tell by the report that he was very small for his age but these two needs didn’t concern us.  After all, it wasn’t like they were long term special needs.

On May 25, 2013, in the registers office in Shaanxi province, a nanny walked in with the smallest 4 ½ year old boy I’ve ever seen. He was soon to become Jack Christian G.

There were no tears shed by him like there had been with our daughters.  He just stared at us.  I held out my hands to him and he left the nanny to come to me.  He was lighter than I had imagined.  He was alert,too. He was watching everyone around him; especially his new Baba (Keith), and his new sisters. He never made a sound.  He just kept watching us. Papers were signed, and pictures were made.  During the flurry of activity he was calm. He never seemed afraid. If anything, he seemed curious.  Once we were done we put him in a car and whisk him off to the hotel.

Still not a sound came from him.  We knew he could talk because the nanny had given us an update before we left the registers office. This update was a little more informative:

The nanny was trying her best to soften the blow, but I was stunned to learn all these problems. To our knowledge, his only physical need was a limp of the lower left leg.  God gave me a peace about it.  I selfishly believed that was because it wasn’t all that serious. I thought that once he got nutritional meals, therapy, and love that all of Jack’s needs would just disappear.  I couldn’t have been more wrong.

After the adoption and spending the required amount of time in China we brought our little bundle of joy home.  Each day that we spent with him we loved him more and more.  The doctor’s appointments started very quickly after our return.

A pediatrician, endocrinologist, dentist, neurologist, neurosurgeon, orthopedics, urologist, therapist, ophthalmologist, ENT, and retina specialist were all on the list of visits.  It got to the point that Jack had so many doctors that we couldn’t keep up with which doctor specialized in what, so we started a spread sheet.

With each visit we learned more and more about Jack and his medical needs. The list was growing. There was talk of needs that I never thought I could handle.  Mild cerebral palsy, severe developmental delays, speech delays, narrowing of the spine, restricted airway, under developed pituitary gland, hearing loss, severe vision impairment, and brain damage were the majority of the list.  No one will ever know the exact cause of all of Jack’s medical issues, but all of his doctors say is that it was a one-time occurrence. Most likely, his birth mother had Rubella when she was pregnant with him.

We were heartsick and scared at the time. But we now know that we are blessed.

At one point the neurologist told us that the part of the brain that has been affected is the part that rules his personality.  Our little boy, with all the plethora of needs he has, is the happiest and most loving child that we could ever ask for.  When Jack enters a room no one notices that he can’t walk.  They never notice that he struggles to make a complete sentence.  What they notice is the joy that oozes out of the child.  They notice the smile that is perpetually on his face.  They also never notice that he doesn’t see well because all they see is the light of pure love that is in his eyes.  To know Jack is to love Jack.  In the short 17 months that he has been home he has touched more people’s lives than I have touched in 54 years.

We don’t know what the future holds for Jack, but we do know that he has come a long way in a short period of time.  Jack has gained 25 pounds, and has grown 12 inches taller, due to growth hormone shots that he gets daily.  He speaks in complete sentences part of the time.  We know that once he gets his hearing aids (which should be soon) that  his speech will most likely advance greatly.

Jack is potty-trained during the day.  He still does not walk without the aid of braces and a walker, but one day we are confident  that he will.  The rapid growth has hindered that process due to an ever-changing center of gravity. Our most recent visit with the retina specialist left the doctor shaking his head in awe when he witnessed Jack playing on his LeapPad.  He was following a train track with the stylus, a task that should be impossible for him to do.   Jack will have to learn Braille but he may also be able to learn to read headline sized print. With each new achievement we get to witness the joy of a little boy that knows he is overcoming huge odds.  No one was more proud of Jack than he was when he learned how to count to 10.

Are Jack’s special needs greater than we expected?  Yes.

Are they more than we can handle?  No.

Would I have agreed to adopt Jack if I had known all his needs?  This is a question that I honestly can’t answer.  I would like to think I would have but I just can’t be sure.

One thing is for certain, if I had met Jack, then I would have agreed immediately.  Jack is the son that God chose for us. His nanny was correct when she said, “He is a very good boy”.  Jack is being used in a mighty way and as he grows and can communicate better he will affect more and more lives.  But the best thing is that I get to be this little boy’s Momma for the rest of his life.

The Stigma of Foster Care