Hope for Children in China: The Bamboo Project 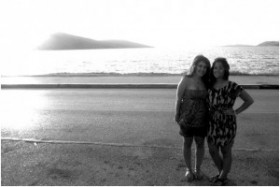 I've thought about writing the story of meeting my sister Maria for years, but have found it so difficult to put all my thoughts, memories and feelings into words.  My parents had always discussed adoption very openly when I was growing up, and shared any stories they could with me.  Interestingly, I can’t remember a specific time when I learned I was adopted, but believe me, I was proud.  My parents were my parents, forever, and that’s really all I cared about.  I always knew I had at least 3 older biological brothers and sisters, and one twin sister.  My sister and I were separated at birth, and adopted to two different families, but that’s all I knew.  We didn't know where she lived, so my Christmas lists always had a place reserved to ask for “my twin sister.”   I was fortunate to have a younger sister, Alexandra, in my life, but did find myself longing to learn more about my twin.   Wondering where she was, did she look like me, and where did she live?  On vacations I would always look around and wonder “does that girl look like me?”

I must have driven my parents crazy, so when I was 18, they agreed that my dad would do some research while on a trip to Greece.  He met with a lawyer and investigator, in hopes of finding even the smallest pieces of information to bring back to me.

My parents are amazing.  I can only imagine how difficult it is to be an adoptive parent, and help your child search for a history that’s wildly unknown.  They were so willing to sacrifice their own feelings for mine, and I will never be able to thank them enough.

My dad came home from that trip with more than anyone expected: my sister’s address!  Her family still lived in Greece, and I was ready to get on a plane immediately.  My plan to show up at their door with “Hi, do I look like your daughter?” didn't exactly sit well with my parents, as they explained this was a delicate situation, and I needed to consider:

Did my sister even know she was adopted?

Would her parents want to hear from us?

WHAT do we do now?

So, with the help of my parents and a friend, I wrote a letter to her family in the spring of 2006, telling them about my life.  We sent them recent pictures, and I explained why I NEEDED to meet their daughter: my sister.  Shortly after, my sister’s parents called mine, and were overcome with emotion as they talked about how similar their daughter, Maria, and I were.   I finally knew her name!  It was on everyone’s mind, but I urged my parents to ask about meeting Maria.

Did she speak English?

Where did she live?

When could I talk to her?

Then, her parents told us what I never prepared myself for:  My sister didn't know she was adopted, and she definitely didn't know about me.  I was deflated, but my parents were hopeful, and reminded me how lucky we were that they acknowledged our letter.

Over the next five months, we became a part of their family.  They would call to tell me how much they loved me, shared stories of Maria with my parents, but still didn't feel ready to tell her.  They were afraid of what Maria’s reaction would be, and I don’t blame them.  Then, finally, Maria’s parents decided they would tell her!  It was December 19th, 2006, and I got a call from Maria’s parents while I was out to lunch with my now husband, Stu.  They were calling to tell me that they had told Maria, and she would call me when she was ready.  WOW.  She knew.  WHEN would she call?  I’m way too impatient for this.  After continuing on with my “normal” day, I sat on the floor of my apartment- waiting.

I just about blacked out.  I don’t remember much of our conversation, mostly because I couldn't stop trying to imprint her sweet little voice in my mind. I think we talked about how she was feeling, if she read my letter, and we promised to send each other pictures immediately.  After hanging up, I just totally lost it.  Oh my God.  That was my sister. These are some of the pictures Maria sent. I proudly carried them with me everywhere.

My family and friends celebrated with me as Maria and I began talking on Skype, calling each other, and just catching up on everything we’d missed over the past 19 years.  Then, we planned.  I couldn't wait another minute to meet my Twinny, so my family and I made the trip back to Greece during the summer of 2007.  To say I was anxious is an understatement.  I was a lunatic!

My family made matching shirts for the occasion, and we were ready to “Meet Maria” on July 1, 2007!

After spending some time in Athens, we traveled about five hours to a town close to my sister’s.  We had arranged to meet Maria and her parents at a restaurant, and met her dad up the street first.  As he hugged me and told me not to cry (between tears of his own) he led us down the street to where Maria and her mom were waiting.

Nothing, nothing could have prepared me to see Maria for the first time.  I couldn't move, speak, or react.  She was literally the same person as me.  We moved the same, laughed alike…everything.

All I remember was hugging her so tightly, just in awe of what was happening.  I was in Greece, holding onto my sister like she would disappear if I didn't hug her tight enough.  We sat down with our family, our one big family, and immediately began comparing ourselves to the other.  Same hands, same eyes, same nose.  My life was changed forever.

Living Hope Adoption is a Christian adoption agency, granted full Hague Accreditation, located in Pennsylvania. We are staffed by an enthusiastic and caring team of professionals committed to providing you with all of the international adoption services you need. Adopting a child is a big step for anyone to take, and our staff takes pleasure in providing future parents support ...