Would I Turn Him Away? 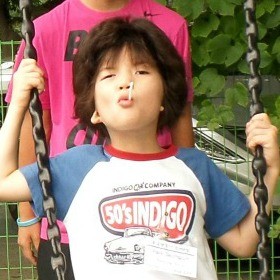 Meet a generous, artistic boy who is currently waiting for a family

While my wife, my son, and I were on the Tour Korea! birthland tour this summer, part of our itinerary was to stop at an orphanage and spend a few hours with one of the children. None of us had previously met the children so we did not know what to expect. We all stood in front of our child’s closed door and waited. When the door opened in front of us, a smiling little boy with bushy dark hair approached the three of us, then he took our hands and led us inside.

After giving us his own little guided tour of his living area, we sat down together to work on an art project. We all had a project to help the children with, ours was to assemble a small popsicle stick house and decorate it.  "S" carefully opened the package and spread all the pieces out on his work table. We were very impressed how he made sure to read and follow the instructions to the letter.  After finishing the project we posed for a small Polaroid picture together and pasted it in the center of the house.  Afterwards, he decided to show us his artwork in his room. He turned on the TV and moved through the menu to find a show that the children apparently enjoy watching.

It was getting close to noon, so "S" decided to walk out and peek into the lunch room. He approached the girls preparing the food and asked if we could eat. Even though the food may not have been ready, he certainly was. Lunch was ready and we all entered the cafeteria and were served a homemade lunch. Families and children all had designated tables and chairs. Our table unfortunately did not have enough chairs. After noticing my wife had no chair, "S" got up from his meal, searched for a chair, and brought one back to her.  No one ever told "S" to do this; he did it completely on his own and we thought it was very considerate.

He had a big appetite--he returned to the food line a couple of times and finished all the food that he brought back to the table. He then filled another plate, carried it to two other tables, and offered food to a number of children. After lunch, he filled a small cup with fruit and bought it to his living area where he handed out pieces to all the children who were playing there. Only after that did he sit with us and finish eating his own fruit.

We spent the rest of the afternoon outside in the play area. After walking most of the yard "S" decided he wanted to set himself on the swing set. With some help from my son,  "S" spent a good fifteen minutes happily swinging.  We finished playtime by sitting down on the entry steps and blowing soap bubbles. He was very gentle to towards us and to the children he lives with. Even with a language barrier it never seemed too difficult for us to understand one another.

Leaving was very difficult for us; my personal experience that day brought me to tears. I could not understand why such a thoughtful, caring little boy had no family of his own to love him? That evening I thought of his circumstances and wondered what we could do for him. I don’t believe it was just chance we met "S"; maybe another voice could help him find a home.  He deserves a better life and I hope this will help him gain one.

Please contact our Waiting Children team at 800.952.9302 or intchild@chsfs.org to learn more about this child. Please reference child ID number 107-31.