Thinking of Adopting? You Can Do It!

Meet a generous, artistic boy who is currently waiting for a family 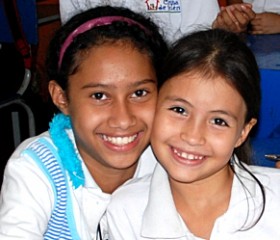 Associate Director of International Programs Ben Sommers had the opportunity to visit Bogota, Colombia in April 2014 to meet with our Colombian representatives and visit institutions. Here, he shares his perspective on the changing landscape of adoption in the country.

To those individuals and entities working within child welfare, “changing landscape” is an oft-repeated refrain referring to a generalized way to understand the broad shifts that have taken place in the field over the last several decades. In more specific terms, one of the most significant developments is the ballooning number of older children, children with special needs, and sibling groups who are living in institutionalized care. For Spence-Chapin, our own organizational shift is focused around taking a proactive approach to addressing the realities of this new landscape.

Colombia offers a compelling illustration of what the new landscape looks like. I recently had the privilege of traveling to Bogota to visit with our Colombian representatives and see firsthand how the rhetoric of changing landscape translated into reality. Bogota is Colombia’s most populous city, being home to approximately eight million people. Similar to any child welfare system in any nation on the spectrum of economic and social development, stories of children coming into the protection system due to poverty, violence, neglect, and substance abuse are commonplace.

The Colombian central authority on child welfare, Instituto Colombiano de Bienstar Familiar (ICBF) has approximately eleven thousand children under its protection in the Bogota region. Of these eleven thousand children, approximately eight thousand have a legal status that allows for international adoption. The vast majority of this population of eight thousand children is made up of older children, children with special needs, and sibling groups. While international and domestic policies prioritize domestic options, the children in protection institutes grow older, explaining the growing population number. Colombia’s domestic policies are admirable in their focus on family preservation and domestic options for these children but as these long processes unfold, or when they fail to yield legitimate options, the children get older.

What I saw during my visits to four protection institutions clearly illustrated this reality: the former nurseries converted to dormitory-style housing, large outside play areas with soccer fields and basketball courts, varied facilities and extracurricular programming, and large staffs of child psychologists focused on the mental well-being of the growing number of children in each institution. It should be noted that the four institutions I visited are exceptional in terms of the resources available enabling them to turn into well-run, holistic facilities. Nonetheless, despite their summer camp-esque exteriors, the children in their care almost exclusively come from difficult backgrounds where abuse, transition, and disappointment have been present. Hence, the clinical focus on mental health and the socializing focus on creating structure, routine, and normalcy.

Again, the protection institutions I visited had the resources that allowed them to create these safe and structured environments. The institutions in rural, lower income areas that are home to thousands of children are not as fortunate. Also not as fortunate is the population of children with special needs who are living within the protection system. I heard numerous stories from child welfare professionals of misdiagnoses combined with bureaucratic indifference that has led to hundreds of children being placed in institutions that are inappropriate for their specific needs. Sadly, these children lack the advocates to help them find a more appropriate environment.

Ultimately, the children I saw are being productive. They take art classes, sing Disney songs, and idolize Lionel Messi. But for them, the notions of “permanent family” and a life free of foreseeable transition are still painted in somewhat vague colors. Many of the children are able to express the agency they feel over their futures by vocalizing either directly or indirectly their desire to be a part of a permanent family. There are challenges that exist for our adoptive families who hope to adopt these children, and these children will face challenges as they navigate the most significant transition of their lives. The limited snapshot of the Colombian child welfare system I was able to glimpse shows that the “changing landscape” rhetoric is grounded in the reality of individual anecdotes and that while the specific institutions I visited have constructed environments where children are able to progress, the key element of permanency is still missing.