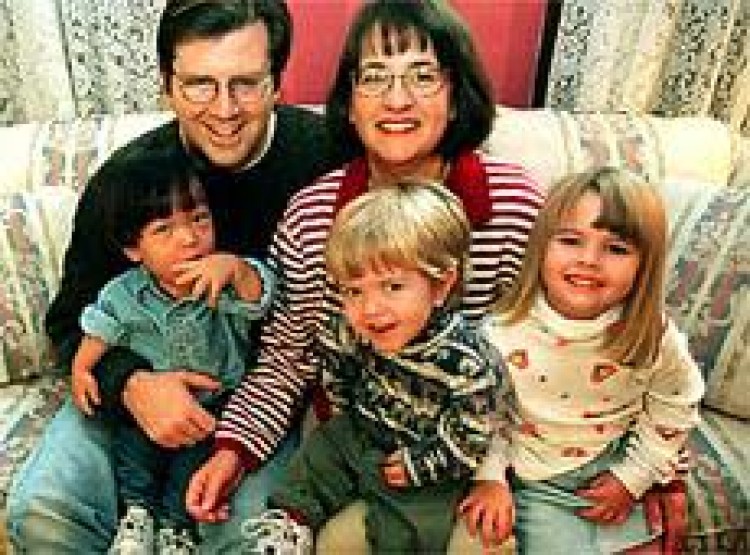 John and Suzanne Graf knew nothing about dwarfism when, seven months into her second pregnancy, they were told their son, Will, had achondroplasia, the most common type. "We felt absolute and total shock. Neither of us had ever had any contact with a little person," Suzanne recalls. But they soon became experts in the special needs - medical and otherwise - of Will, now 3. And a year later, they decided their family had room for one more little person, Maxwell, now almost 2.

Given up at a South Korean hospital by his mother after being diagnosed with achondroplasia, Maxwell was being transferred to a government-run orphanage for children with disabilities in Seoul when the Grafs learned about him.

They had been thinking about adopting another dwarf as a companion for Will and their 4-year-old, average-sized daughter, Laura. Having another child of short stature would give Will someone he could truly relate to on a daily basis, they reasoned. But even more importantly, it might save a child from growing up in an orphanage. 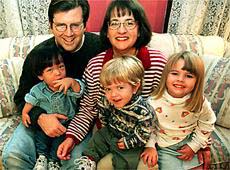 "We'd read somewhere that little people are not adopted as readily as average-sized children," explains Suzanne, 33, owner/partner of the Grand Hall At The Priory, a banquet facility on the North Side.

But friends and family - and the many demands of Will's condition - left them unsure.

"Everyone felt it would put too much pressure on the family, and that it would take away from our daughter if we had two children with special needs," says John, 34, a partner with the law firm Tucker, Arensberg, P.C.

Will, after all, had been through four major surgeries in his first two years of life, including two to implant a shunt to drain excess fluid on the brain. There was also a spinal decompression operation at 15 months, a procedure in which the base of his skull and the first vertebra were removed to give his hourglass-shaped spinal cord more room.

Like many children with achondroplasia, Will also had had his tonsils and adenoids removed to alleviate breathing problems, though he did not need the leg surgery required for many dwarfs to alleviate leg bowing. It was reasonable to expect that Max also would require extensive medical attention. "Everyone kept saying, what if, what if?" remembers Suzanne.

Young enough to have another child on their own, the Grafs also worried they would be depriving someone else of a chance to become a parent. Because dwarfs often have a difficult time bearing children - up to 25 percent of their babies die in utero - they often choose to adopt dwarf children.

"We didn't want to be in competition with other little people," says Suzanne.

Then there were the time demands, including Will's many doctor appointments and speech, play and pool therapy at Allegheny General Hospital's Skeletal Dysplasia Clinic and the Children's Institute of Pittsburgh in Squirrel Hill. Could their already-overtaxed schedules accommodate one more child?

What clinched it, said John, was the Korean baby's situation. When the Grafs saw his picture in the Little People of America's quarterly newsletter, LPA Today, he was about to be transferred off the adoption rolls.

"If we adopt him, he comes to live with us. If not, he spends his life in foster care," John says. 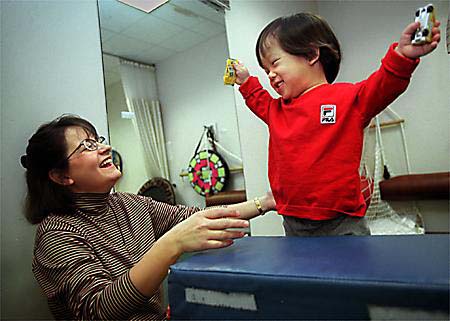 And so they began the long process to adopt the 15-month-old, then named Young Bum Kim, and bring him to their home in the Mexican War Streets section of the North Side.

Families International Adoption Agency in Pittsburgh pushed through the required home study and various evaluations in about a month, but things moved more slowly at Americans for International Aid and Adoption, the Michigan agency that was working with South Korean officials. South Korean adoptions are subject to a strict quota system. Unfortunately for the Grafs, Max's adoption was formally approved after the allotted number of children had been let out for the year. And because South Korea doesn't allow adoptive parents to enter the country, all the Grafs could do was sit back - and wait.

"It was really frustrating," says John, who in addition to contacting U.S. Sen. Rick Santorum's office, ended up calling an old Korean college roommate to see if he could somehow accelerate the immigration process. "Nothing could be done. He was sitting there, and we were sitting here."

"A lot of families get very emotional during this process and end up doing things that jeopardize the adoption," says Geoffrey Clauss, executive director of Families International. "But they were able to maintain their composure."

The Grafs also had to deal with some jealousy from Laura toward her prospective little brother. For about two months, Laura said repeatedly that she didn't want him to come. She would occasionally look at his picture, throw it on the ground and say "no!" But she came around when her parents explained to her that Max would need a big sister to show him around.

In November 1997, in an effort to create pressure for Max's release, Clauss arranged for a videotape to be made of him at the orphanage. By showing that he had significant health problems, they hoped to convince the Koreans to put him at the top of the list for adoption in 1998.

"We knew he probably needed surgery," says Suzanne, "so we were really anxious about his health."

Achondroplasia, which is caused by a gene mutation in early fetal development, affects one child in every 25,000 U.S. births. It is one of more than 100 diagnosed forms of dwarfism and is characterized by arms and legs that are disproportionately shorter than the head and torso. Other common features are a relatively low or flat nasal bridge, protruding jaw or prominent forehead.

Though achondroplasia is classified as a disability under the Americans with Disabilities Act, most the estimated 25,000 "achons" in the United States enjoy fairly good health, a normal life span and normal intelligence.

While the Grafs were excited to see their child for the first time, the video of him in the orphanage also proved disquieting.

"We watched it over and over again, waiting for him to smile, but he never did," Suzanne remembers. "Our reaction was, we have to get him out of there as fast as we possibly can and give him love."

In early January, the Michigan agency called to report Max might have a serious hearing loss in one ear. Did they still want him? They did, of course, and on Jan. 15 got word to be at the Pittsburgh airport on Jan. 22 to bring Max home. Eight months and $13,000 later, they would finally get to meet their son.

The scene at the airport was unbelievable, John says.

"Our whole family was there, sitting on the floor of the airport, and Laura and Will were climbing all over me to get to Max, hugging and kissing," he says.

"Poor Max, he was just shell shocked," adds Suzanne, laughing. "We looked and smelled different - I'm sure he didn't understand."

Max's confusion showed in the first few weeks, when he began biting his parents and his brother and sister. But the biting stopped as he became more comfortable in his new home. Suzanne says he still gets a kick out of hearing his family sing "Twinkle, Twinkle, Little Star" in Korean, something they learned before he arrived.

In March, after just six weeks in Pittsburgh, he had the same spinal decompression surgery as Will. In April, doctors removed his tonsils and adenoids and put in ear tubes to correct his hearing problem.

"It's great," says Suzanne's mother, Judy Cardell. "They're giving Max chances in life he never would have had."

The surgeries also demonstrated how much Laura and Will had accepted their new brother. When Max entered the hospital in March, their grandparents took them to Lake Erie. But the two were very upset at being separated from their brother. To this day, Laura and Will usually pass up a special sleep-over at grandma's house to stay with their brother, their mother says.

During a recent visit, Laura had her arms wrapped tightly around Max's neck.

The Grafs admit the last year hasn't been easy, but not nearly as difficult at they imagined it would be. What made the difference, they say, is the unfailing support of their families.

"It turned out much better than we ever dreamed," says John. "We hoped Max would be accepted by our kids, and he was. He's blended in immediately."

The biggest challenge, he notes, has been overcoming people's prejudices.

Wherever they go, people stare or give funny looks. Even adults, says Suzanne, sometimes can't help but point.

" Parents will come up and say, 'Why are they so short? Are they midgets?' " she says. A few have even asked if the blond-haired Will and raven-haired Max are twins.

As expected, daily life with two little people under age 4 is hectic. Both children must see specialists very three months, both at AGH and the Alfred I. duPont Institute in Delaware, and Max needed weekly physical therapy to help strengthen his muscles and bones. But that's a small price to pay.

"How many people go through their whole life and say, 'What have I done that's made a difference in someone else life?"' asks John.

"We've always thought that what little people need most is self-confidence," says Suzanne. "With that, they can overcome anything."