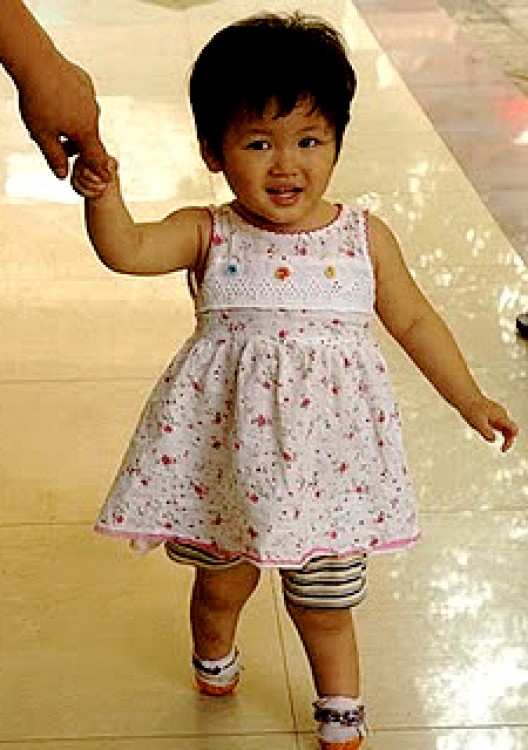 Lilah is our second adopted child from China. Her brother Luke was adopted in February 2007 and the word to best describe his adoption was probably shocking. We were under the impression that his disabilities were minimal, and we could not have been more wrong. He was in trouble. He was desperately malnourished, his congenital turned in foot was actually two clubbed feet, and over time we came to find out his delays were due to some unknown birth trauma that resulted in CP like symptoms and Apraxia (he is currently almost 4 and is just now learning to talk).

Why are we retelling Luke’s story on Lilah's tale? So that we can show the difference between the two adoptions. We were always equipped to deal with the disabilities, but struggled with the surprise. We entered Lilah's adoption with intention of knowing what we were in for. We went through a new agency, WACAP, where we felt we would get a very clear understanding of her disabilities so we could have a plan upon her return. It was not our intention of adopting so close to Luke's adoption, but while searching through WACAP in an information gathering effort…there she was!

It was absolute love at first sight. She had a fire in her eyes, and an air of mischief we swear you could see through one photograph. We can't think of how to put into words how seeing a picture can trigger such feeling and knowing, but it was real, it was from the heart and the gut. To top it off, she was from the same Province as Luke, which only seemed to seal the deal.

Quick change of plans, we rushed to get our application in before anyone else tried to steal our daughter (because we knew she was immediately)! Thank God we had done this before, since it was a race against time. By the end of a few days, we were "expecting" once again.


Now as to her disabilities: We almost have to make ourselves write the word, because we're not sure Lilah believes she has a disability. She was born with a genetic disorder (not amniotic banding as we thought) that resulted in her being born with no feet. We haven’t found a way to tell people this without getting shocked reaction, but there it is. Lilah spent her formative years essentially walking on her ankles. In addition to this her fingers were not fully developed on both hands, so she has very small fingers, which makes it hard for her to grip anything.

We met with pediatricians and orthopedists and prepared ourselves to be the parents of a little girl with physical handicaps.

Lilah disagrees. No feet. No problem. The magnificent people at her orphanage had fashioned shoes for her out of a rubber ball cut in half and sewed into a sock. With this contraption she was able to go outside and walk, run and dance without hurting her small "heels" on the hard surfaces outside the orphanage. There will be a special place in Heaven for the person who came up with this idea. As a result, she had uninhibited ability to go outside and play like every other child in the orphanage.

Where Luke came quietly into our home, Lilah came in like a Hurricane! She's high energy, boisterous, and terribly funny. She's got a naughty streak, which she quickly taught to her quiet big brother. She challenges Luke and has been a God-send in helping him be more outgoing, playful and take more risks. And she's smart. Good Lord is she smart! She just turned 3 and we had to let her start school because she needs more and more stimulation.

To address her needs, we took Lilah to the wonderful people at Atlanta Orthopedics and Prosthetics. Like us, for them, it was love at first sight. They quickly designed her prosthetics, which she loves and calls her "shoes". She took to them immediately and has been unstoppable. She also has become sort of an ambassador for Atlanta Orthopedics. The staff has her meet patients who are new to prosthetics or who are having a harder time adjusting to show them what is possible.

What is possible? Everything. She takes ballet. She rides her bike. She has trouble with stairs and jumping due to her lack of ankle joints, and can’t hold onto large items due to her small fingers. Those are her limits, for now. We know she will probably think of a way to overcome these too.

This story was contributed by No Hands But Ours, a fantastic adoption advocacy website!

Not Wonderful, Not Lucky: Just Parents