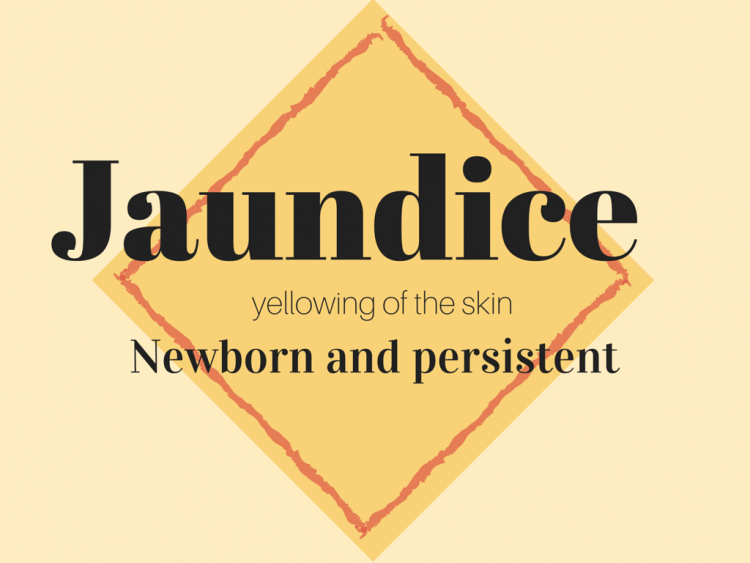 There are 2 major categories of jaundice that we see in children and both of these are fairly rare to be mentioned on a preadoption referral.

Jaundice is the yellow pigment that you might see in many newborns, during the first few weeks of life. When babies are born, they have more red blood cells than they need so some of these red blood cells are broken down. When they break apart, they release a compound called bilirubin which creates a yellow pigment to the child’s eyes and skin. There are two forms of bilirubin, and the one which results from red blood cell breakdown is called “unconjugated” or “indirect” bilirubin. Evolutionarily, there is some thought that bilirubin is an antioxidant and thus, those babies with moderately elevated levels of bilirubin may actually benefit from this. 1

The level at which concern is warranted varies with an infant’s age (in hours) and how premature they were. That said, by the time an infant is more than 3 days old (or by the time we get testing results) generally the level considered concerning is greater than 18-20 mg/dl. Levels that are >18 mg/dl tend to warrant some caution as this is above the defined high risk zone.4

The reason for concern with elevated bilirubin levels is that as this level increases to high levels, it can potentially cross into the brain and leave deposits. This is called kernicterus (KI) and it is very rarely seen in a preadoption referral because high bilirubin levels are easily treated with light therapy (phototherapy), which is readily available in almost all countries. KI can cause abnormal movements of the body, deafness, and problems with eye movements.

On preadoption referrals, we occasionally get a report of the exact bilirubin levels and how this tracked over time, but this is rare. More typically, we get a general or one time bilirubin level and we are extrapolating the probable values using dates, our clinical experiences and evidence based medicine. Kernicterus can best be seen on an MRI of the brain, but it is uncommon to get these in most countries because of the expense, time and difficulty doing this in children. Therefore we are often left taking a leap of faith. That said, most symptoms of long term problems from hyperbilirubinemia should be evident by about 1 year of age, so if children have no symptoms by the time they reach their first birthday and are developing and growing normally, then it is unlikely that they will have any long term effects.5

There are some infants who will remain jaundiced (yellow) beyond the first few months of life. Most often this is caused by the other form of bilirubin called “conjugated” or “direct” bilirubin. Further bloodwork and imaging should be done if a child still has notable jaundice past 14 days of life.6 There are syndromes that can cause the body to produce high levels of direct bilirubin, but the majority of the time it is caused by a blockage of bile flow from the liver and gallbladder into the intestine due to a disease known as biliary atresia.7 The surgical procedure that can restore the flow of bile for children with biliary atresia is called the Kasai procedure and needs to be done in the first 60 days of life in order to have the best chance for a reasonable outcome.8 Unfortunately, in other countries early detection and swift definitive medical/surgical care is not always possible. There are dozens of other potential root causes for high direct bilirubin including infections (viral or bacterial), metabolic disease, obstructing cysts or lack of the tubes that usually carry the bile to the intestine, drugs, hormone problems or heart problems. While we can try to guess from physical exam, photos and any imaging that has been done, we are almost never able to carry out the full diagnostic workup in another country that would be needed to fully diagnose the cause.