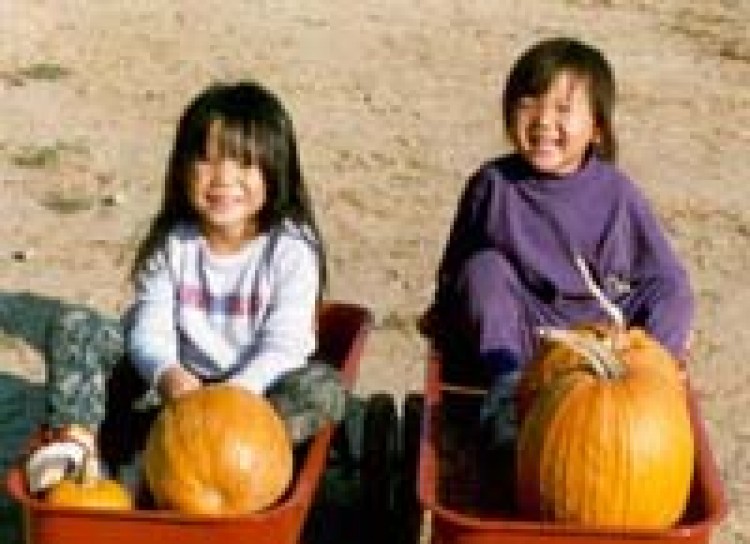 I can still clearly remember the day nearly seven years ago when our social worker called to say she had just received information on a three-month-old Korean baby girl. As the parents of four birth children, my husband and I felt that our experience as parents and our love for children should naturally extend to adopting a child with special needs. Our only daughter, bracketed by two older brothers, and one younger, was also hoping for a sister. So the little Korean baby seemed a good fit. Her only medical problem was a missing left hand.

Having never dealt with a birth defect, I admit that we had many questions and concerns about the limitations this child would have growing up with only one hand. Through my pediatrician I met a woman in our town that had a daughter with the same condition. This woman, who today remains a good friend, soothed many of my worries and concerns. She also made me realize that I was lucky to know ahead of time about the missing hand. She was unaware of her daughter's condition until birth. We spoke a long time about all the things her daughter was capable of doing with her one hand. She mentioned that the one thing that bothered her daughter particularly was not being able to go across monkey bars on the playground.a

With this information, my husband and I decided to proceed with the adoption. Shortly after Kaitlin arrived we came to the realization that it was us, not Kaitlin, who had "special needs". The day we brought Kaitlin home from the airport and placed her in an infant seat on the floor she promptly flipped over the seat and made a quick get-away. This immediately dispelled any worries that I had about how she would crawl with just one hand. I needed several sets of eyes in the back of my head to keep up with this little Korean bundle. She was unstoppable.

To this day Kaitlin has never let her disability get in the way of anything she wants to do. In fact, I hesitate to call her lack of a hand a disability. She "posts" or "curls" whatever she is manipulating with her terminating left wrist to position the object for her right hand. At age two I watched her open an allegedly child safe bottle. At age three, much to my horror, we watched her nicely light the dinner candles for us. I still have trouble with those small match packets. At age four she astounded my husband one day as he watched in total disbelief as she tied her shoelaces into nice neat even bows. Where had she learned this task? My husband and I had just assumed she would never tie shoelaces. Kaitlin stated quite casually that her older brother had showed her a couple of times and then off she went skipping out to play leaving my husband totally dumbfounded. I still cringe to think of the time my social worker was sitting in my kitchen making a home visit after the arrival of our second adopted child, and Kaitlin - my little "one handed octopus" as my father lovingly called her one day - emerged from the bathroom with most of her beautiful long hair chopped short.

Kaitlin is now in first grade. Her teachers remark that she never needs any special help and in fact often helps the other children complete tasks. She can braid hair beautifully. SHe skates and rides ponies and lives every day to the fullest. Kaitlin is not the easiest child to raise. She is determined, strong willed and energetic. But we can't help but admire her spirit and know that she is, and always will be, an inspiration in life to many others. Oh, and by the way, monkey bars are never a problem.

When my husband and I were ready to adopt for the second time, I mentioned to my social worker that as a maternity nurse I was comfortable with premature babies. Shortly after that she called to say that a "waiting child" was available. She was nine months old and was born at 27 weeks gestation weighing only two pounds. I expressed my interest in this baby girl and reviewed the paper work sent from our social worker. I admit that we had reservations about accepting this child. According to her chart, she appeared to have every complication that "preemies" can have. There was an apparent lack of oxygen at birth. She was, however, making slow steady progress. My pediatricians reviewed the information and expressed their concern about the long term effects of her extreme prematurity. I reviewed cases with friends, who were also maternity nurses, of babies who had been born prematurely in our unit. Some of these had serious life-long birth defects such as blindness and severe cerebral palsy.

With five children already living in our home my husband and I wanted to have as much information as possible about what to expect from this child. I sent her records to a Boston clinic specializing in international adoptions. The pediatrician had a more positive outlook although because the baby was so young there were obviously no guarantees.

However, after the experience with my first adopted daughter and the fact that I had seen extremely premature infants return to visit our maternity unit as robust toddlers, we decided to accept this waiting child. We believed that God would not give us more than we could handles and so we proceeded with the adoption.

When we arrived at the airport to receive Meghan, I had immediate confirmation that some of my fears about her were unfounded. Two staff members from Wide Horizons had escorted our daughter from Korea. They remarked that after the grueling marathon flight that I had nothing to worry about. It had been a challenge occupying a curious, active, lively 11-month-old. This remark proved to accurately characterize Meghan's personality. While she obviously was at first a little disoriented she quickly adapted to her new environment. She was active and curious and didn't want to miss a thing. The first six months she was home she had a number of respiratory problems, but since then has rarely been ill. She is proving to be rather tall and is almost the same size as her sister who is older by 2 years.

Meghan is now four years old. She is a sweet, loving child that holds her place against her older siblings very well. She has a vivid imagination, a great sense of humor and understands complicated concepts although she is generally quiet and reserved. She is self sufficient and mature in many ways for her age despite her prematurity. She is determined to keep up with her older sister and is not afraid to try anything. She also skates and rides ponies and is right on target developmentally.

I marvel at the resilience of this tiny baby that struggled through the early months of her life in intensive care. Her hands, arms and scalp still carry the faint scars from IV needles. As a maternity nurse I know that Meghan received extraordinary attention and care at Samsung Medical Center in Seoul, South Korea. It is obvious that the staff genuinely cared for this tiny human life and went far beyond their routine duties and tasks to give Meghan her start in life. My husband and I are also very thankful for the faith the staff had in us, her future parents. We truly believe that this tiny person that started life so early, and the miracle of her survival, is destined for great things in the future.