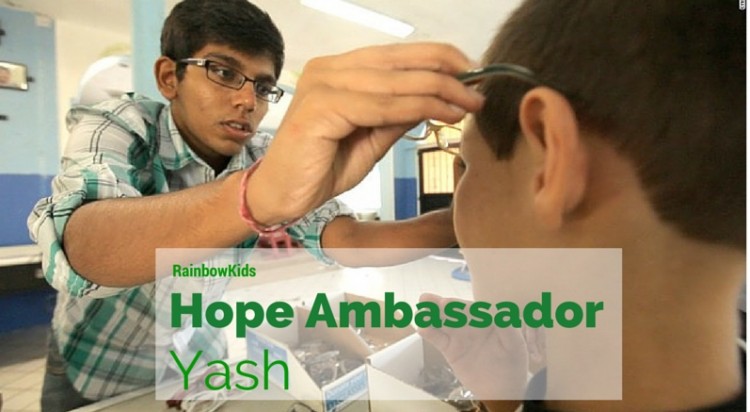 What happens to a child who attends school but cannot afford the eye glasses needed to see the learning going on around him?  What happens when books and papers and chalkboards and years pass by in a blur?

Vision. It is crucial for successful learning and when a student doesn’t have the ability to see things clearly in the classroom they are prevented from achieving their full potential. The lack of vision puts them at a disadvantage for the rest of their lives. Yet, today millions of children worldwide lack a basic pair of glasses needed for academic success.

Eighteen-year-old Yash Gupta is trying to change that number one pair of glasses at a time.

Four years ago Yash was sparring in Tae Kwon Do and broke his glasses.  He was without clear vision for a week while his glasses where being fixed.  It was during that blurry time he realized how difficult the lack of good vision prevented him from achieving his full potential in school. After some research Yash learned that nearly 13 million children lack a basic pair glasses, even though in the United States millions of pairs were being tossed in the garbage.  He knew something had to change so at 14 years of age he founded Sight Learning.  Sight Learning collects glasses through donations and distributes them to students around the world who need them and makes sure that every child has the chance at a quality education.

Since its foundation four years ago Yash has collected over a million dollars worth of glasses that he has distributed to over 21,000 children in Mexico, Honduras, Haiti, and India.

I asked Yash what it was like, the first time he realized he had made a difference in the life of someone, “The first time we made a trip was an extremely surreal experience.  We went to Tijuana, Mexico and as a teenager still learning what Sight Learning could accomplish I was really unsure about what the eye clinic would look like. For me however, I immediately realized what an incredible impact we could have as soon as we gave the first child his glasses.  The joy, the gratitude, and the sheer emotion on his face and his family's face just inspired me.”

That first trip has been his most rewarding experience so far because he saw first hand what Sight Learning could accomplish beyond the gift of clear vision.  “Every time I go on a trip and see the children we are helping, its awe-inspiring, words cannot describe the inspiration and drive that instills in me.”

Yash never anticipated his actions would have such a far reaching impact, but the letters from children around the country who are inspired by his work and their want to become involved in their own community continues to motivate Yash daily. He is leading by example.

I asked Yash if he had a message for other young people wanting to start their own charitable organization, “Stop waiting and to start acting. It's never too early, you're never too young to make a difference. If you have a passion, an idea, a desire to change the world then the only thing stopping you from making that happen is you. I believe in you and you should believe in yourself too.”

Do you have a pile of old glasses just sitting around gathering dust?  Do you want to start your own eye glasses collection drive?  Visit Sight Learning to learn more about what you can do to bring the gift of sight to students across the globe!