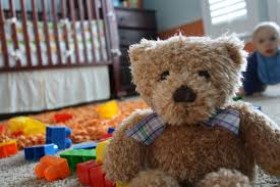 Helping Your Child Embrace the Beauty of Their Differences: Cleft Bears

One of the concerns that we often hear as staff when working with families is the topic of how to help a child cope with something that may be “different” about them.

We’ve all seen it happen. A child is out in public and perhaps they have a cleft lip or a missing limb and you catch someone or several individuals staring or often pointing at your child. They may mean no harm at all and quite possibly they are just curious, but this can often make a child or their parents feel very uncomfortable, especially if the child is of the age where they can distinguish differences and have come to realize something about me may be a little “different”. Maybe you’ve been guilty of this or have seen others do this to you or your child when out in public.

This was Karen’s story. As an adult affected by cleft lip and palate, she came to realize that many families affected by cleft conditions shared that oftentimes their children need a unique type of emotional support and a means to help them express and understand the feelings that they have about themselves, their appearance, and their treatment process as a child. It was due to this, that Karen decided to take on a project that has now grown substantially for children with cleft lip and palate. While attending a conference, she saw a doll with stitches sewn across its upper lip and in that moment, felt that the doll would have helped her cope with her facial difference as a child had it been available. She began collecting donations of Teddy Bears and began to hand sew stitches on the lips of 300 bears. The project was later realized by the Cleft Palate Foundation and became a partnership where teddy bears are now available to families who have a cleft affected child.

Parents of children who had received the cleft bears began providing feedback that illustrated that the bears provide unique emotional support for the child and help them express and understand the feelings they have about Carmen, age 6, was born with cleft lip and palate and received one of Karen’s original bears. According to his parents, “Even though it’s a stuffed toy, Carmen relates to it and feels he’s not the only one with a cleft. It builds his self-esteem and he has even shown it to teachers and relatives.” Likewise, the parents of Barry, age 7, state, “The bear gives us an opportunity to explore Barry’s feelings about the bear’s appearance and condition and then monitor our son’s feelings about himself. Anything that can enhance a positive self image for children with clefts is invaluable.” (from www.cleftline.org)

If you are interested in learning more about cleft lip teddy bears or cleft conditions, click here.

Due a large number of new child files arriving in the upcoming months, we anticipate little to no wait time for many of our families who submit a dossier to China for a cleft affected child. We encourage you to visit our Waiting Children pages or contact our China staff at 800.429.3369 to learn more.