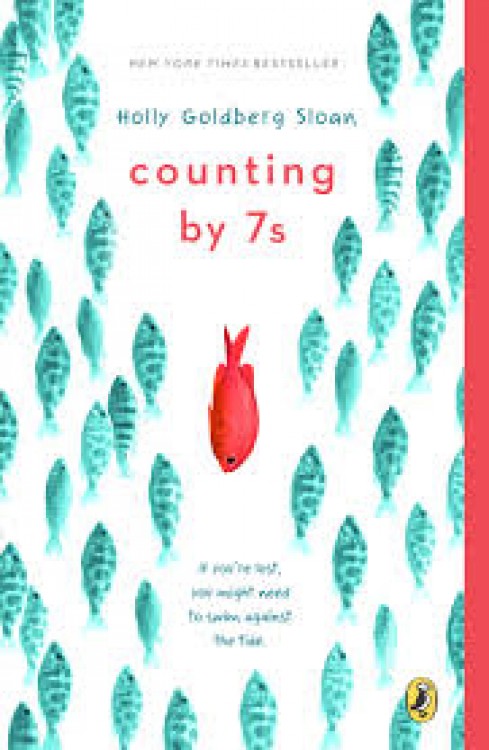 Today I'm featuring a title I read a while back, that touched me so much I couldn't help but share it with you. Holly Goldberg Sloan's Counting by 7s is being compared by many to R.J. Palacio's Wonder, and for good reason - both books feature narrators with compelling voices, unique challenges, and incredible people in their lives. But you can't really compare these books on any significant level, because each brings such individual strengths and impact to the reader. So let's acknowledge that one and move on, m'kay?

Counting by 7s tells the story of Willow Chance. Willow's a middle schooler who's best described as different from others she encounters. Willow's family is transracial, as Willow, who is multiracial, was adopted by "two of the whitest white people in the world (no exaggeration.)". But this isn't an adoption story. Willow's a genius, finishing the state proficiency exam so quickly that the school puts her into behavioral counseling. But this isn't a smart kid story. Willow's an oddball, not quite fitting in with anyone else at her middle school because of her talents and her interests. But this isn't an odd-girl-out story.

No, what defines this story is what happens to Willow in almost the first couple of pages: Willow's parents are killed in a car accident, and Willow, the adoptee/smart girl/oddball, is suddently and irrevocably on her own. Willow's got no support network to speak of, but from the emptiness around her, a web of family begins to appear. There's Mai Nguyen, a Vietnamese-Mexican girl who encounters Willow at the counselor's office and becomes a friend almost against her will. There's Pattie, Mai's mother, who sees Willow's plight and becomes convinced that foster care is no place for this tremendous child. There's Quang-ha, Mai's brother who disdains Willow but can't help but be impressed by her talents. And there's Dell Duke, the going-nowhere counselor who's treading water in his job until he becomes entangled with Willow and her story, and suddenly finds his whole life turned upside down.

It's tough for me to sum up in mere words just how much I loved this book. As with Wonder (here we go with the comparisons again), Counting by 7s is a watershed book, one whose story stays with you and that makes you think differently about assumptions you've previously held. Willow's a remarkable character in that her unswerving focus on her particular interests sweeps up everyone around her, a force that's changing their lives before they even realize it's happened. Though the narrative is propelled by a tragic event, this is by no means a sad book -- rather, it's a book about hope, about the goodness of human nature and how every minute can be a turning point. Willow's story speaks to the cynic in all of us, proving that even the most isolated and insular among us can be moved outside of our bubbles to be a force of change in another's life.

I highly recommend Counting by 7s for middle school readers, and for older readers as well, because I think even adults can learn a lot from this wise girl and her story, lessons about valuing yourself and about reaching out, believing that we can change the world. If you read one chapter book this year, make it Holly Goldberg Sloan's - and if you give one, make it this as well. You'll be glad on both counts.

Counting by 7s by Holly Goldberg Sloan, published by Dial Books for Young Readers
Ages 9-12 +
Source: Library
Sample: "I was taken to see an educational consultant that autumn and the woman did an evaluation. She sent my parents a letter.
I read it.
It said I was 'highly gifted.'
Are people 'lowly gifted'?
Or 'medium gifted'?
Or just 'gifted'? It's possible that all labels are curses. Unless they are on cleaning products.
Because in my opinion it's not really a great idea to see people as one thing.
Every person has lots of ingredients to make them into what is always a one-of-a-kind creation.
We are all imperfect genetic stews."
Highly recommended

Urgent Need!! Time is Running Out for Two Brothers

Struggle Over Control for Adoptive Children