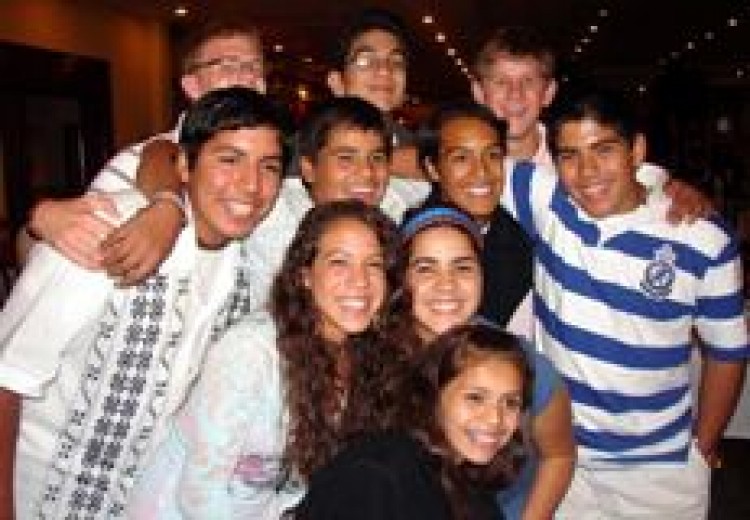 Cameras flashed as Dave and Jody arrived home from China with their infant daughter. Scores of pictures were taken at Sam's first birthday party, just days after he arrived from Guatemala . Video tape captured Rose's soccer game, the cameras still rolling twelve years after adopting her from Vietnam .

Pictures help parents recall memorable moments shared with their children. These images, the basis of a "lifebook," form a visual timeline of a child's life. As each picture is worth a thousand words, the tales that accompany the pictures are told over and over again. Eventually, as the stories are internalized, a child begins to weave them as their own.

Stories take on a different flavor each time a new storyteller begins. Further, kids create new anecdotes, recalling important events that they are now able to tell about themselves. The movement from "lifebooks" to "face book" is symbolic of the transition from hearing one's story to telling your own.

Telling a story about a remembered event is clearly easier than retelling one you've heard. As a children retell information they've heard about themselves, questions arise, sometimes accompanied by a desire for further information. For children who joined their family through international adoption, these questions reflect not only curiosity but also loss.

What is it like in the country where I was born? Do I look like people who live there? What kind of houses do people live in? Do people wear the same kind of clothes that we do? Do kids go to school? Where was I born? Does anyone remember me? Does my birthmother think of me? Do I have any brothers and sisters living there? Do they know about me?

For many kids, there is a longing to echo Paul Harvey in saying "And now you know the rest of the story."

The opportunity for a child to visit his or her birth country helps fill the gaps by providing a stronger sense of story, self and identity. Jenny Bailer, an adoptive mom who has traveled to Korea with her kids states, "In my humble opinion, a trip like this is a MUST for kids to fully form their identities and begin to understand where they fit in a world that includes two cultures."

Traveling Into My Space via a Heritage Journey

With increasing frequency, families formed through international adoption are returning to visit the country where their child was born. Often referred to as a heritage journey, this journey back is also a journey forward. The experience adds to the sense of story, and nurtures a sense of self. Here's how.

Sense of Beginning - Internationally adopted kids have few if any pictures of themselves or their life before joining their family. Because little concrete evidence exists of that time, kids often feel their life began as they joined their adoptive families. Intellectually they know this is not true, creating unsettled feelings. Returning to the place where their story began seems to acknowledge that time period and validate one's presence in it. As 15 year old Theresa points out after her journey to Peru,
"you will know your own history from experience."

Sense of Information Each time a different person tells the same story the emphasis, importance, and recollection of details vary. When it comes to telling their own story, children need to gather information about and assign importance to the details of their life. Participating in a heritage journey encourages children to think about the beginning of their life and explore what missing pieces of information are important to their rendition of their story. Some of those missing pieces may be sought and found when traveling. Or perhaps different threads to one's story are discovered. And sometimes it is the lack of information that leads to the acceptance of one's story.

Sense of Place -- Kids living in a country other than where their life began straddle a bridge between "over here" and "over there." Learning about their birth country through their parents' memories, exposure to information, and participation in culture camps and other events creates an awareness of similarities and differences. The opportunity to visit the place where life began moves awareness to ownership and pride. Upon her return from Cambodia , 10 year old Jesse writes, "I can't believe I came from here. It's so cool."

Sense of Belonging Several years ago, Greg and his mother traveled to Chile , Greg's country of birth. They returned to the Massachusetts Cape during the height of the tourist season and frustrated by the slow moving traffic, Greg told his mother it was time for the tourists to go home. Mom reminded Greg that just a week ago they were tourists in Chile and no one asked them to go home. Greg quickly responded You might have been a tourist, but I was a native." The conviction of this statement gives voice to the strong feelings of belonging kids experience after visiting their birth country.

Those feelings are a direct result of meeting, interacting, and being accepted by people they meet while traveling. As Emily wrote after visiting Paraguay, her country of birth, "I can say with pride that I have two countries to call home."

It is important to recognize that feelings of loss and place are part and parcel of identity building. Thirteen year old Lucy described her loss in these words: "learned that even though I was born in Paraguay , I have not lived here and experienced their culture so I am therefore not a TRUE Paraguayan." Interestingly, on the very same trip, 18 year old Jessie adds, "Paraguay is what makes me , ME". It is those conflicting pieces that when added together help a child find there sense of self. And that's a good thing!

Sense of Connection A heritage journey provides kids the opportunity to discover links, or connections, with their country of birth. For some, like Amy, these links are intangible. During her stay in Korea , she and her parents visited the clinic where she was born. While in the waiting room, 11 year old Amy flitted from one chair to the next pausing momentarily to sit in each one. Although her parents observed this behavior as boredom, Amy later announced she had sat in the same chair as her birth mother. And indeed she had since she sat in each and every chair. She was connecting in a way that worked for her. I have often pondered that day for Amy, being so thankful that she was able and willing to share with her parents what might otherwise have gone forever unnoticed, an intangible connection cloaked in what seemed like disinterested behavior.

Other times the links are much more tangible and recognizable. For example, while in Peru , three girls sharing the journey each carried a plastic bag while visiting ancient ruins. As they boarded the bus one day, the guide noticed the bags were full of sticks, stones, bottle caps, and assorted other "finds". She asked the girls if they planned on taking home this "junk". Incredulously the girls replied, "Junk?!? These are pieces of our ancestors." Time and again, we have seen kids collecting soil from their birth country, bringing home bits and pieces of a country they want and need to stay connected with in order to move forward.

From Life Books to Face Books Traveling Into My Space can be viewed as a metaphor to describe child development. It recognizes that a child's sense of self is initially described by a parent, eventually grows to include outside influences, and continues to be a work in progress. The opportunity to visit their country of birth enables the international adoptee to interact through concrete experiences to their heritage and story. Empowered by the messages of journey, belonging, pride, and understanding, the journey "into my space" continues as kids build a strong sense of who they are.