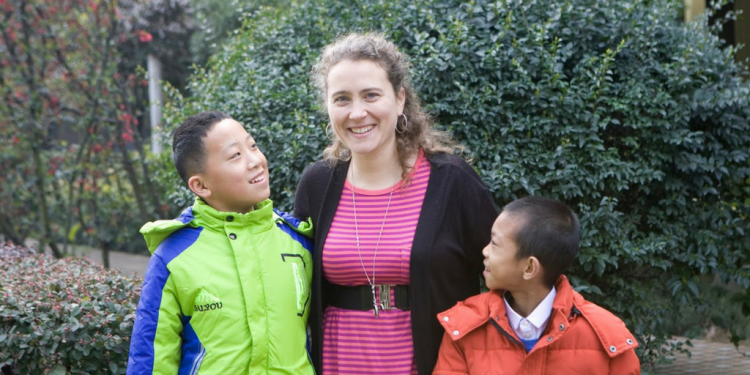 After participating in an orphan hosting program and saying a difficult goodbye to one of her soon-to-be sons (“SC”), this amazing mom and her family have been hard at work to complete their adoption process and bring him home forever. During their adoption process, they fell in love with another amazing boy who was hosted by an advocate family, and their family grew by one more! Now, they’ve finally reached the part of their journey that they’ve been longing for – the trip to China to bring their boys home.

Below are the stories from both of the boys’ Gotcha Days, as well as an emotional visit to SC’s finding place.

“On my way from the hotel to meet DJ at his hotel!! A whole range of emotions right now. I can’t imagine what he is going through since he will be leaving everything he knows to come to America as our son. Praying that his precious heart is protected during this time of excitement, but also grief. It’s crazy that after all these months of paperwork and prayers, that I am finally picking up our son!!”

God is so good and has answered so many specific prayer requests. The transition has been amazing so far with DJ. When we arrived at the hotel, both of us were a little unsure of what was going on. The orphanage staff told me that he had been asking every few minutes when I was arriving because he was ready to go. So much for less luggage, he came home with 2 backpacks and another bag full of toys! I need to buy another suitcase already. He had a whole backpack of just snacks for me. He told the staff all morning that no one else could eat the snacks but his mom! When we first started talking between us and the translators, he started to cry. He quickly told my guide that they were happy tears because he was so glad to finally have a family. He said that he has wanted a mom and dad of his own, forever. He has totally won my heart and already has me wrapped around his finger.

Showing me a book full of pictures from his childhood. What a HUGE blessing this is. They also gave me the outfit he came to the orphanage in as a baby. Both of these are invaluable gifts!!

After leaving the hotel meeting where we signed paperwork for guardianship for the night (our adoption will be official tomorrow), we headed to get our family photo. As we walked, I held DJ’s hand. At one point I had to let go, he quickly grabbed my hand again as we started walking. When we got back to the hotel, I gave him his Lego set and that kept him busy for over an hour. He is very inquisitive and asks a lot of questions, which has been difficult with the language barrier. We are slowly figuring things out though as we go. He is already working on English words and I’m learning more Chinese.

After months of work and prayers, I was reunited today with SC.  Before SC went back to China, Wayne and I told him that every time he saw the moon, he was to remember that we were in America praying for him. We were not able to tell DJ that (as we were not his host family), but we were praying for him as well. God has continually been gracious and merciful to us throughout this entire process. Today was no exception. I was blown away once again by God’s grace and compassion. He truly loves these children.

I had so much trouble sleeping last night. I was so excited for today that I felt like a kid going to Disneyland. Even DJ woke up and the first thing he asked was, “SC?” We ate an amazing breakfast and then piled into the van to drive to SC’s orphanage. Originally we were going to have the family day at the Civil Affairs Office, but it got moved to the orphanage. What a blessing that was! It was amazing to see where SC has lived the last 10 years. The orphanage was beautiful and colorful. You could tell that the workers genuinely love the children.

We were ushered into an office after meeting one of the chaperones from the summer hosting. DJ loved seeing her again. We did some paperwork for temporary guardianship (adoption is finalized tomorrow). I was blessed with another photo album book with baby pictures and pictures of SC’s childhood. We even have a note from his birth parents that they left with him and he was abandoned! After a few minutes, SC finally arrived.

It was so wonderful to see his sweet smile and to hug him again. We were able to catch up and talk a little with all the workers. We then all proceeded to walk through the orphanage to SC’s foster parents’ home, which was on the same property.

SC got to show me his bedroom, his awards from school, introduced me to his foster parents, and even played the piano for us. It was such an amazing opportunity. I feel so blessed to have seen and experienced this part of his life. At one point his foster mom started crying. She has cared for SC for 6 years and helped him when he had surgery on his foot. She also just said goodbye to another foster daughter last week. She was adopted as well. I was able to hug his foster mom and tell her how much we appreciate all that she has done for SC. It was beautiful, heart breaking, and surreal all at the same time. So many emotions in the room.

SC has been non-stop smiles. DJ and SC are getting along as though they are long lost brothers and best friends. We spent the afternoon playing Legos, transformers, and we also took a little walk. One cannot forget food. Both of these boys can eat!! SC shared his snacks from his foster parents with DJ in the car. It was so sweet. He also brought out a bag of cookies and said it was for Baba and his sisters. He is so thoughtful!!

This evening we went to a Chengdu Opera where they have the famous mask changing show. Both of the boys had a blast.

Seeing SC’s finding place was special, but it also stirred up a ton of emotions. I happened to see a mom feeding her small baby and I wondered what went through SC’s parent’s minds when they sat him in an area they knew he would be found and could receive help. They had cared for their sweet baby boy for three months. They left a note on him. I still have to have someone translate it for me all the way, but they explained that he needed help with his foot. I cannot imagine the anguish they experienced leaving behind this baby they loved in order for him to get the medical help he needed.

Visiting this spot not only stirred up emotions for me, but it must have stirred up emotions for SC as well. It is one thing to read about and take training on trauma and loss, it is another thing to experience it first hand. About five minutes after we got into the van, I looked back to talk to the boys and I saw that SC didn’t look well. He looked distressed. When I asked him what was wrong via the guide, he told her that he was experiencing car sickness. This surprised me because he never once was car sick over the last two days or over the month he was with us this summer. Emily (our guide) quickly surmised the situation and said that he was probably experiencing a lot of emotions that were making him sick, and he didn’t want to admit it but say it was just car sickness. SC told me he felt nauseous and very dizzy. I looked it up and emotional distress can make people feel physically ill, including feeling nauseous and dizziness. It broke my heart to see my son hurting so deeply that he felt sick. I encouraged him to always feel free to express his feelings to us and I also told him how much we all love him. I told him that we would always be there for him and he can tell us anything and we will listen. It took him about 20 minutes to feel better.

It breaks my heart to know that our boys will probably always have questions, experience hurt and pain from their past, and feel lost at times. This is one reason I have tried to hard to document everything I can about this trip through pictures, saving memorabilia like newspapers, taking pictures of foster family members, and even taking pictures of finding places. All of these pieces will help me answer future questions, to the best of my ability, to help them through their struggle. This is why I also feel so blessed to have important things like DJ’s outfit when he was found, a copy of SC’s finding letter, baby pictures of the boys, etc.

We are now in Guangzhou, where we will finish the last of the paperwork for the US side. In the end, we will have the boys’ visas so that we can travel to the United States. When the plane lands, they will be US citizens. We have really enjoyed being adventurous this trip. Our guide told us where McDonalds, KFC, Starbucks, and Pizza Hut was located. I avoid those places in the states and I don’t plan on eating Western food while in CHINA!! We ventured out tonight and found a Japanese restaurant that had amazing ramen. SC took charge and placed the order for us in Chinese. He ordered the noodle dishes and coke for me, DJ and himself. I had to fake liking the coke because I really don’t like it. SC caught me making a face when I drank it. Oops! The boys LOVE their noodles and are so fun to watch. While we were waiting for the bill, the boys entertained themselves – SC found creative ways to use his wipe and DJ figured out if he put coke in his soup spoon, he could drink it backwards.

Ten Things to Think of When Adopting An Older Child

What are Eligibility Requirements in International Adoption?