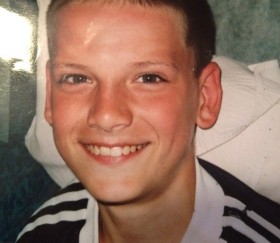 It all started one day when my phone rang. It was a pastor from my church
and he was telling me that there was a group of orphans coming from Ukraine
in a couple months and would I be interested in hosting a 12 y/o boy? That
was the day I learned about "Frontier Horizon". Well, I said I would get
back to him. We had 3 biological sons and one was also 12. After I looked up
Ukraine on a map, I discussed it with my husband and we figured it would be
an incredible experience for our family.

A few months later we went to pick up our Ukrainian guest. He was a little
scrawny kid who was sleeping on the bus just moments earlier. He managed a
smile and jumped in our truck. Little did we know how profound that meeting
would be.

We immediately adored this child. He was not at all shy. He would ask for "7
eggs" for breakfast and we couldn't keep enough fresh fruit in the house. We
took him swimming to the beach, to the pool, to the waterslide park, the
amusement park, etc. He was so very gracious. At one point, he asked if he
could have a Gameboy. We told him that was kind of a big request and that he
could have one if he did a few chores...he was elated and said "Give Me Job"
in his limited, but charming English. So, we told him to wash the truck. He
quickly did the chore (and did an amazing job) and came running to us and
said "Give me more job". We asked him to coil up some rope...again he was on
it and did a great job. He came running to us and said "give me more job".
At this point we took a look at our bio-kids questioningly and told our
"little work horse' that he had earned the Gameboy. He was so happy.

We spent a few weeks and the time passed quickly. The dreaded day came when
he was to return to Ukraine. Sergei and I spent most of that day in each
others arms sobbing. We didn't want to make any promises to him as we didn't
want to hurt him if we couldn't keep our promises. We did tell him that we
would do everything we could to help him and that we hoped to see him again.

We toiled for a year going thru the international adoption process (that was
the average time it took when we adopted) and finally were reunited with our
son, Sergei, 13 months after we sent him back. Here we are 14 years later. Our son has taught us so much about love and
trust. It wasn't always easy but it was always worth it. Sergei is now
married and living in upstate NY in his 3rd year of business college. He has
come such a long way and through it all, he has touched so many lives with
his kindness and gentle spirit.

It's been the most rewarding experience of all of our lives!

Call 757.749.3921 http://www.frontierhorizon.org/   What is Orphan Hosting through Frontier Horizon? Every year we bring orphans (social and biological) to the United States and Canada. Through our program, children are matched with host families and get to experience what life is like in a loving and caring home for a few weeks in the summer or over a holiday break. The h...