4 Reasons Money Cannot be THE Factor in Adopting

Staying In Touch With Other Adoptive Families 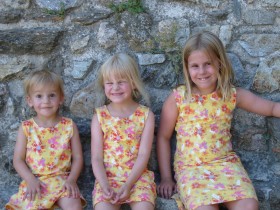 Foster to Adopt: Our Family Story

They entered foster care in January of 2012. The oldest (H) was 5, the middle (D) had just turned 4 and the baby (A) was only 2 and a half.  As is typical in foster care, they were initially moved to an emergency placement and within a week moved to their first official foster home. They were only there for one week before they were split up. H remained in the current foster home and D and A were moved to another placement. They were told their behaviors with each other were too out of control to be managed in a single household. Though they were reunited two months later, this separation had a profound effect on them.

Our girls were in seven different houses while in foster care. Our house being their eighth and final placement. One placement they were in for about a year, and they believed it would be their forever home. Another placement they were in for only two weeks before their provider told them they were “too bad” for her to keep. They also spent time in a foster home that was later decommissioned due to inappropriate use of discipline. While I am grateful for those who took care of my daughters before I met them, they suffer lasting effects from almost all of their previous caregivers. All three of my daughters have PTSD both from birth family and their time in foster care.

The extreme behaviors that caused them to be separated in their first foster home were evident from the day they moved in. The girls could not be unsupervised at any point in time. They could not play by themselves as it would very quickly devolve into violence. They tested limits and threw tantrums a majority of the day.

Our house was transformed and our days scheduled down to five minute intervals. We taught our daughters how to brush their teeth and that yes, clean underwear was a requirement every day. We installed inside locks at the tops of the doors to prevent running away—or at least give us enough time to get our shoes on before A, our youngest, went out the door. Mirrors were installed around corners so that adults could have private conversations while watching for eavesdroppers. My wife and I learned to speak in code and even had to text each other while in the same room because H, our oldest would not allow us to have private conversations. Crisis lines were put on speed dial. The house phone was unplugged and hidden after the police showed up because my oldest daughter called them because we were making her do homework.

The first six months or so, bedtime consistently took three to four hours.  For my oldest, her bedtime routine was elaborate. She had to have an eye mask and a heating pad. She had three blankets that had to be placed on her in a specific order. She also needed to have the fan on to counteract all the warming items. She had to have a nightlight on—yes with the eye mask—and a noise machine. If any of these items were missing, or we couldn’t find them immediately, it would trigger an anxiety attack that could take 30 mins to calm. Finally I had to sit in her room with her until she fell asleep. This was actually a step forward in our relationship. She trusted me enough to be in her room while she fell asleep and that she felt safe with me. She still has her back scratched every night before bed and the fan and the noise machine on. But bedtime no longer inspires panic, is significantly shorter and ends when I turn the light off.

They Have Come So Far and Accomplished So Much

We made our forever family official on December 4th, almost two years after the girls moved in. Our daughters have lived in a safe and stable household for two full years now!

They have never been denied a meal, never been left alone, never ignored.

Currently my wife and I drive the girls to 11 hours of therapy a week. This includes attachment therapy, trauma therapy, equine therapy, family therapy, skills training, occupational therapy and ocular therapy. The numbers of hours required for doctor and therapy appointments, school volunteer hours, medication management; require that we have a stay at home parent. That’s me.

My oldest daughter has not yet addressed the trauma in her past, and may not be ready to do so for many more years. My youngest daughter, has run out of her classroom seven times this week and my middle child is struggling to keep up to grade level due to the amount of work she puts into therapy. Safety, stability and love are not enough. It takes all those plus a lot of work, and time. We have a long way to go.

And yet we have come so far. My daughters have come so far. They work so hard and have accomplished so much. They have a loving, devoted and involved extended family. They are attending good schools and will have the opportunity for higher education. They have learned to swim, play sports, eaten ethnic food and performed experiments in the local science center.

They are growing into such unique individuals and I am proud of the opportunities we have given them, and more importantly that they have given themselves. Last month we went to Disneyland, and it was wonderful. If you had told me two years ago, even one year ago, that we would take a successful trip to Disneyland I never would have believed you. But we did.

My daughters are amazing little people. H is so much fun. We can play games together, watch and talk about sports together. She even gets my jokes now. I really enjoy getting to do things with her that my other two aren’t old enough for yet. Our bond is very strong, because we had to work so hard to create it.

D is such a hard worker. She is such a good helper and takes pride in doing her chores well. She is also coming out of her shell now. In Disneyland she would do this little dance when she didn’t realize we were watching. It was so rewarding to see.

A has so much energy. She laughs freely and is determined to figure everything out and to be her own unique person. She has more determination than most adults I know. I can only imagine what she will do with that determination as she gets older.

As of right now all three of my girls want to be nurses—which is what my wife does. Neither of us expect them to stick to this nor do we really care. I hope they are happy and healthy, whatever that means to them and I know that because of Foster Adoption, they will have the chance to accomplish whatever it is they want in life. I’m so happy that my wife and I, along with Boys & Girls Aid, were able to give them these opportunities. I hope you will consider giving others the same opportunities.

We do not simply find families, we find the right families for children in need. Boys & Girls Aid works to secure lifelong connections for every child in Oregon. Regardless of age or background, we believe children belong in families that are permanent and stable. While every child deserves a family, not every child has a family. Between the ages of 0 to 23, we have a focus...