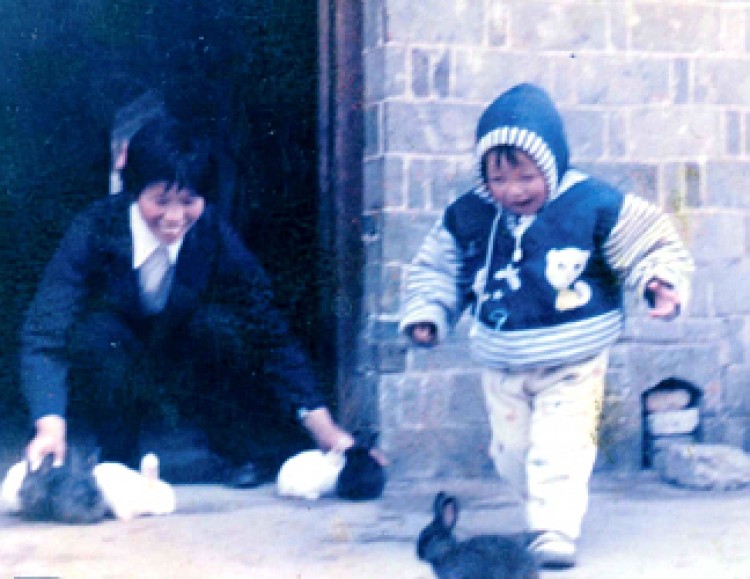 Four Irish-Americans and a Chinese girl walked into a restaurant.

If you are waiting for a punchline, that wasn't a joke: It's just my family whenever we go out to dinner. For those of you who don't know me, my name is Mary and I was adopted from China when I was two and a half.

I've always wondered what people think when my family and I are out together. Do they see what I see: two parents and their three children? Or do they see two Americans, their two sons, and mentally check me off as my older or younger brother's girlfriend? Do they even think about what they see, or am I just obsessing over the minor details?

For a long time, I hoped I was just obsessing, because it was those sorts of questions that made me feel insecure about my place in my family. Those questions made me doubt myself, and, as cliché as it seems, they made me wonder about my identity.

It began with exasperated sarcasm. "Wait, so, are you Japanese or Chinese?"

My general answer to The Question was, "No, not really," but if I was feeling particularly irritated, I would say, "What, you couldn't tell?"

Eventually the sardonic remark, accompanied by a roll of the eyes and perfected deadpan, became my way of ignoring a question that, for some reason, bothered me.

It bothered me because even though I was a Chinese girl adopted by an Irish-Catholic family, I did not want to be categorized as "Asian" by other people when, for the better part of my life, I did not even categorize myself as Asian. Friends' lighthearted comments about my "Asian-ness" were actually funny, but when someone, in all seriousness, asked me about my nationality, I always felt offended on some level; I did not care what I was, so what gave other people the right to question?

In the summer of 2007, after my freshman year, I traveled to Beijing to study with a Choate Rosemary Hall program. There, while all of my white American friends called me Fu Ping, my Chinese host family insisted on calling me Mary. It was their attempt to make me seem more American despite my obvious Chinese appearance, because having an American in the home was exotic. I had grown up in a Roman-Catholic middle school, where, to my classmates, everything about me screamed Asian!; this was the first time I had ever met anyone who considered me just plain American. It was a strange concept and more than a little odd, but I liked it.

When I came home from China that summer, I experienced another "first" in regards to my race. It was my cousin's wedding, and someone I had never seen before, decided to go down the line of cousins with whom I was sitting and play guess-the-parents. To my cousins, she said,"You're Bridget's, right? You are, too. And you're Susan and Chris's," while my younger brother received a,"You're Tish and Mike's."

She stopped at me. Her blank stare and hesitation lasted only a moment, but it was a moment too long.

"Tish and Mike's," I supplied hastily.

She couldn't tell. But then, I tried to tell myself, why should she be able to? I mean, it's not like I was ever going to hear, "You have your father's eyes," or "You look just like your mother" from anyone. Despite knowing all this intellectually, I still felt hurt, rather than annoyed or uncomfortable. That one incident kept replaying in my mind; I was incapable of just letting it go as I did most other comments about my race.

It made me think. What am I?

I came closer to answering that question the summer after my sophomore year, when I learned through awkward conversation and random speculation that my roommate at the Middlebury Monterey Language Academy was from the same orphanage as I was. Later, when I returned home from camp, my mom and I set out to see if we could find other girls from my orphanage, or maybe even from the foster family that took care of me after my brief stint as a newborn in the orphanage. Our investigation, including the exchange of part-English, part-Chinese, and part-Babelfish Online Translator emails, ended with a trip to China at the beginning of last summer, and a foray into the first two-and-a-half years of my life there. We planned to visit the relatively small city of Fuzhou, in Jiangxi Province.

While there, I found memories of a toddler who chased rabbits, pretended to do schoolwork with her elder siblings and practiced making sad faces. I heard tales of a girl who knew she was leaving and told her daddy she was going to America to make a lot of money to buy him a drink, and stories of a newly adopted child who sat at the hotel door and screamed until she cried herself to sleep.

I came face-to-face with the forgotten. With the physical remnants of my past. I found an old, one story cement house riddled with over-grown weeds and traditional good luck signs pasted on the sides of the door in faded red. I saw a broken crib kept long after its occupant departed for America, and a garden through which a toddler used to traipse under the illusion she was helping to grow things.

And, finally, I met a family so full of love, that even after they endured the pain of watching me leave, they cared for 13 more infants, ending with a girl they found on their doorstep. I met a mother, a father, and two older siblings who despite 14 years and a language barrier still called me their daughter and sister. I met a family that made me feel unbearably guilty: I wanted to be able to tell them I loved them and remembered them, because they so obviously loved and remembered me. I wanted them to be more than strangers to me so badly that I cried when I knew no one was watching.

There was something missing. As selfish as it makes me seem, there was a whisper of disappointment that only I was able to sense, a feeling that some integral part of what I was looking for just wasn't there.

When I went to visit my foster family, I was told many things about myself, but I was not told who I was. I realized, after the trip, that I should not have expected to find the answer to my question of self-identity with my foster family. They could not tell me if I was Chinese, or American, or perhaps even half-Chinese and half-Leprechaun; that was something only I could figure out.

But I did not know where to begin.

Strangely enough, the beginning of enlightenment came later in the summer, as the start of school drew close and I finally picked up my copy of "Confucius Lives Next Door."

It was ultimately a conversation with my mother about the summer reading book and the campus speaker Cathy Bao Bean that really settled things for me. The conversation went something like this:

"So, I heard there was a speaker," my mom said casually while I was impatiently trying to hang up the phone on her.

"Well, what did she talk about?"

"I don't know. Being Chinese and American?"

"Well, Mary," my mom said in that reproachful tone of hers, "don't you think that's kind of pertinent to you?"

"No," I told my mom frankly. "Not really. She's actually Chinese."

What I meant was, Cathy Bao Bean grew up in a Chinese household, and she learned those Confucian values that Reid writes about in "Confucius Lives Next Door."

AHA! my mind all but screamed at me. So this is the answer, it continued. This is who you are.

Perhaps it seems narrow-minded, but I don't identify with the Chinese, socially or culturally. Like many Americans, I don't even fully understand their society or their culture. I just look like them.

So I would like to thank the author of "Confucius Lives Next Door," Cathy Bao Bean, and my mom for guiding me to that elusive identity of mine: I am Mary Katherine Behan, which is about as Irish a name as you can get. I stand at an intimidating height of four-feet-eleven-inches, and, just like the rest of my family, I am American.

Embodied in my idea of being an American is that I have the capacity to be whoever I want to be, regardless of what I look like. The world can assume I speak fluent Chinese, or Japanese, or Korean, or am good at math, simply for the fact that I am of Asian descent. I don't mind anymore, because I know who I am.

Adopting a Child with Hearing Loss