What does an "Approximate Time frame" mean in the adoption process

Finding Their Identity Outside the Slums of São Paulo, Brazil 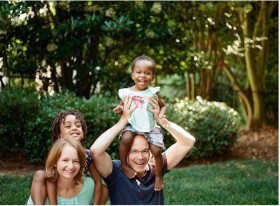 Chris and Mary knew they wanted to grow their family through adoption after a mission trip to Liberia brought them face to face with the children who were in need of families. They wasted little time after their realization that adoption was right for them. Two years later were able to adopt their daughter Arri from Ethiopia. Another two years flew by, and they knew they were ready to adopt again.

After years of searching for the right program, Chris and Mary finally decided that the South Africa was a perfect fit for their family. According to Mary, they came to this conclusion because they were encouraged by the answers that they got about the South Africa program at Spence-Chapin. They liked that the children placed internationally tend to fall into a more vulnerable category of having special needs, being older, or being part of a sibling group. And “we were encouraged by Spence-Chapin’s enthusiasm about the program and their honesty about the adoption process.”

One of Chris and Mary’s most memorable moments in the adoption process was when they received “the call”. They had been matched with a 20 month old little girl! A few months later they travelled to South Africa with their four-year-old daughter on what they describe as a transformative trip for their family.

“We are so grateful that our whole family was able to be in South Africa together. We were welcomed with open arms and made so many friends there. We met our daughter, Etta, on our first full day in country and it was love at first sight. Etta took to our older daughter, Arri, in a heartbeat, and one of our most cherished memories is the sight of Arri taking Etta by the hand, walking her out of her care center for the last time, and into the arms of our forever family.”

Chris and Mary were struck by the commitment of the staff to the children in their care at Johannesburg Child Welfare (JCW), Spence-Chapin’s partner agency in South Africa. Mary says that their social worker was “a saint who advocates tirelessly for the children and also manages to be 100% on top of all of the paperwork involved in an adoption.” They took comfort in knowing that their social worker would be by their side in every meeting in South Africa and that she knew their daughter: her personality, likes, and dislikes. She was available to answer questions at any hour of the day and clearly loved the children.

Chris and Mary have been home with Etta for about a year. They describe Etta as “playful, hilariously funny, and sweet, sweet, sweet. “ According to Mary, their family transition has been very smooth.

“We are so grateful to Spence Chapin for helping us grow our family. Words cannot express our gratitude.”

Our Adopted Child Won’t Bond With Both of Us: 8 Tips to Support Attachment

The Children in Need of Adoption in South Africa