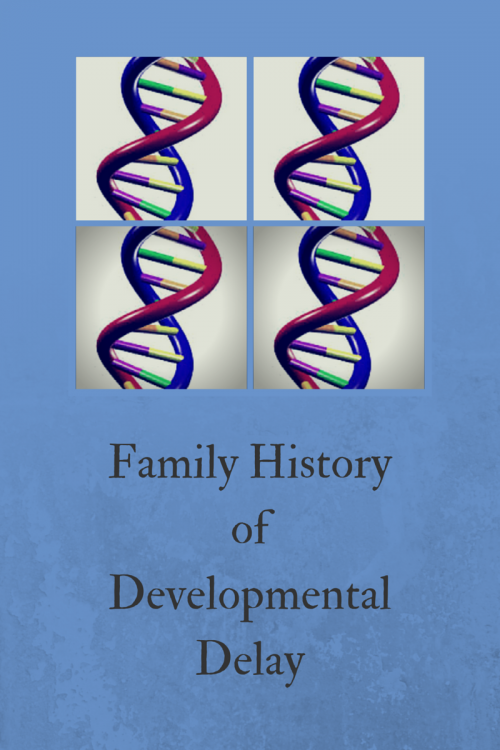 Developmental delay in young children, or intellectual disability (ID - in the past referred to as mental retardation or MR) in the birthmother or birthfather is occasionally reported in preadoption referral information. This can be listed in the form of IQ tests, special education or other terms like “oligophrenia” which can mean anything from true intellectual disability to a person who did not finish their high school education. There are a lot of reasons for a person to have lower IQ that have nothing to do with heritability:

That said, there are also genetic forms of intellectual disability. However even genetic forms of ID are not necessarily inherited by the child. There are many modes of inheritance and some of the most common patterns are the following:

Recessive: In this type of inheritance, both copies of the gene have to have mutations in order for the person to have ID. Each time a person has a child, he or she will pass one copy on to the child. However, since the child gets the other copy from his or her other parent, it is very unlikely he or she will be affected unless by chance, the other parent ALSO happens to carry the exact same recessive gene (very unlikely).

X-linked: the defective gene is carried on the X chromosome. Women have 2 “X” chromosomes and men have one “X” and one “Y.” Since women have 2 X’s one normal gene can typically override the defective one. Boys only have one copy of the X chromosome so if theirs is defective, then they are more likely to be affected. Fragile X is an example of X linked intellectual disability and in older children, is usually associated with some physical exam findings as a clue that the child may be affected.

Multifactorial: In most families in which there is a history of intellectual disability, the inheritance is more complex because it involves multiple pairs of genes, as well as other factors we don’t understand as well. In these families, depending on how many people are affected, the chance any one person in the family will be affected is usually lower than with dominant inheritance (see above) but higher than in the rest of the population.

Another big clue to genetic forms of ID lies in the pedigree or the number of related individuals who also have noted developmental issues. Unfortunately we don’t frequently receive large pedigrees from other countries but Taiwan and Korea as well as the USA are sometimes able to provide this history. As an example, if the child is a boy and the brother, birthfather and uncle all have ID then the chances of this child also being affected will be higher. If the birthmother has developmental delay but all of the other children in the family as well as the aunts and uncles and cousins are all doing fine, then the risks will be less.

The Positive Tuberculosis Test in the Internationally Adopted Child