Post Adoption: How Can I Teach My Child to be Gentle and Kind? 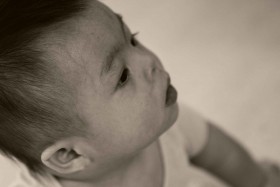 We have a biological son and our daughter is adopted from South Korea.  We were in the process of prayerfully considering our second adoption, never expecting to have another child of our own.  Little did we know, God had other plans for our family and we found out we were expecting.  After many tests and sonograms, we learned in the Spring of 2010 that our son would be born with Down Syndrome and have 2 different heart conditions.

We heard many comments from Drs. over the months that were less than supportive -- you name it, we heard it!  While it was not easy, we brushed off each and every comment the OB/GYN Doctors had to say to us, just because our son happened to have an extra chromosome.  Caleb was truly a VERY unexpected gift and we loved him so, including his older brother and sister!  After two open heart surgeries, Caleb climbed into Jesus' lap after being with us for a little over a year.  Caleb had taught us in only 414 days that not only could we care for a child with Down Syndrome, but that they had a lot to teach us as well.  He never spoke a word or even learned to sit up, but he taught us more and showed us what true unconditional love is in a very short amount of time!  After months of grief in our family, we knew full well we were not "done".  As time lifted some of our grief, we began to realize that we were still meant to adopt again, but this time we were to adopt a little one with special needs.  Something we would have never considered for our family before Caleb.

We fell in love with a little guy who was featured on Reese's Rainbow, as well as Rainbow Kids!  We inquired and filled out information about our family and a couple weeks later, we were told that we had been chosen by the birth family to raise Kaden. The process began and we were off to the races!  International adoptions have many twists and turns and many times where we had to hurry up and wait...but on the other end of the paper trail is a beautiful child needing a home.  Kaden had a mom, dad, older brother and sister who could not wait to bring him home.  The process took 14 months, but thankfully the agency in Taiwan was good about sending updates, pictures and videos, almost every month!  We could not wait for those updates each time!!  After 14 months, we finally brought Kaden HOME and a little piece of our broken hearts was filled again.

Sure, it is not easy raising a child with special needs, but what child is easy?!  Our greatest challenges have been with insurance when something like physical therapy is not billed right!  :)  Kaden brings so much joy to our lives each and every day.  He runs to his daddy when he walks into the door after a long day at work.  He makes us laugh at the dinner table every night.  He amazes us with his strength and determination every day!  What is different about a child with Down Syndrome...absolutely nothing!  He may need a little extra therapy at school or a little extra help with forming his words.  He may need a little extra time potty training or learning how to tie his shoes, but he teaches US more every day then we can even describe.  We have determined after two and half years with K that the extra 21st chromosome is made up of mostly love (the other portion is made up of stubbornness:).

So, in the end, why in the world would you want to adopt a child with Down Syndrome?  Because you can!

Founded over 130 years ago, The Gladney Center for Adoption is a premier, Hague accredited, adoption agency with international and domestic adoption programs. With adoption programs in Asia Gladney is able to help parents adopt children of all ages. In each region that we work, we are excited to offer International Waiting Child Programs to help children who may be older or hav...

Across Continents, The Threads That Connect Adoption Champions