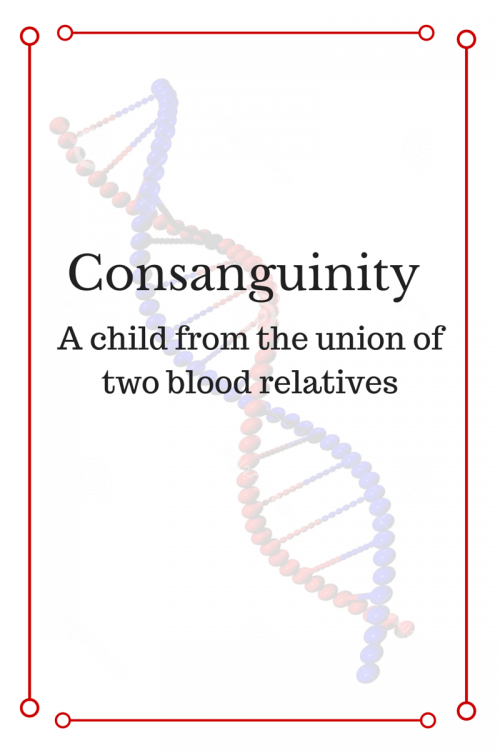 Consanguinity is defined as “genetic relatedness between individuals descended from at least one common ancestor.” (1) Put more simply, consanguinity means two individuals are “blood relatives” or “biological relatives.” We often receive information and questions regarding a child from a union of two related individuals.

There are many cultures in which it is favored to marry a blood relative. In approximately 1/5 of the world’s population, it remains a deeply rooted tradition, most commonly in the Middle East, West Asia, and North Africa (and among emigrants from these regions in other parts of the world). (2) Generally, there is increased risk for birth defects and genetic disorders in children of consanguineous unions because of what are called “autosomal recessive” genetic disorders and other conditions related to a number of different factors between related people (ie multifactorial disorders).

Autosomal Recessive Disorders: We inherit one copy of each of our genes from our mother, and one copy from our father. For some of our genes, both copies must function normally. Other genes require only one functioning copy of a gene to function normally, and an abnormality in only one copy of the gene does not have negative effects. In an autosomal recessive genetic disease, both copies of a gene have a change, or “mutation,” that affects the gene’s ability to behave as it normally should. Typically, a person with an autosomal recessive genetic disease has inherited a mutation from each of his or her parents and does not have a “normal” copy of the gene. The parents, in this case, are “silent carriers” meaning they each have a change in one copy of the gene that causes the recessive condition, but because they have one normal copy of the gene, they do not have any disease symptoms as a result. It is estimated that all of us are silent carriers for one or more serious recessive diseases (3), but because we carry a change in only one of our two copies of the gene, the disease is not expressed. Individuals who are blood relatives are more likely to be silent carriers for the same recessive condition(s), hence the risk of autosomal recessive genetic disorders is higher in children born from consanguineous unions. Autosomal recessive diseases vary widely and symptoms may include developmental delay, intellectual disability (mental retardation), muscle disorders, neurologic disease, blood disorders, multisystem disease, and many more. Examples of specific autosomal recessive disorders include: cystic fibrosis, sickle cell anemia, phenylketonuria (PKU), and Tay Sachs disease. There is genetic testing available for many autosomal recessive conditions. Additionally, state mandated newborn screening programs test for a variety of recessive genetic conditions with possible treatments in the USA but these programs are largely unavailable overseas with the exception of a few tested conditions in S. Korea. Multifactorial Disorders:

If there is not a known genetic disease in the family, the risk of birth defect for a child of first cousins may be estimated as 2-3% more than the population background risk, mostly attributable to autosomal recessive diseases (2). The worldwide general population risk of having a child with any birth defect (abnormality present at birth) is approximately 6% (4). This estimate includes birth defects due to many causes, including recessive genetic syndromes and multifactorial conditions. Based upon this estimate of general population risk, the chance of a first cousin couple having a child with a birth defect is 8-9% (2-3% more than the general population risk). It is important to remember that not all conditions are evident at birth, and may not be diagnosed until later in childhood or as an adult. The risk estimate is somewhat higher if considering diseases that may not be symptomatic or diagnosed in infancy. If the relationship between the parents is more distant than first cousins (ie a second cousin), research suggests the increase in risk for severe disease for the children is not significantly higher than the risk among the general population.

In general, if you are considering the adoption of a child with a history of consanguinity, you will need to consider your comfort with possible increased risk of autosomal recessive and multifactorial conditions, which may be apparent at birth, but others may not be diagnosed until later in childhood or beyond. It is also important to understand that the likelihood of a genetic disease depends upon how closely related the parents were reported to be. The more distant the relationship is between two individuals, the lower the risk of sharing harmful gene mutations. As the degree of relatedness becomes more distant, the risk of having a child with a severe disease or birth defect approaches the risk in the general population. Consanguinity: Two people related by blood, that have a child You will need to consider the question of a possible genetic disease, specifically autosomal recessive and multifactorial diseases, depending up how closely related the parents were.

Forever Family: My Daughter's Foster Mother is Still Part of Our Lives

A Baker's Dozen: Building Our Family