Tuning In to Our Adopted Children's Reality 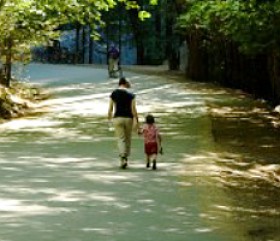 Confessions of a Mom with Attachment Disorder

Maybe I should have left my name off this one. Perhaps I could have been one of the anonymous writers who change their name to protect their identity. I will probably open my inbox to find I've been booted off a Yahoo adoption group or two after this confession. I'm sure I won't be invited to the next LifeBook creation group or called up by the Discovery Channel to cover my next adoption. But, I'm not really confessing this to win any popularity contests anyway. The truth is, I am quite certain that what I am about to confess is a dark, deeply held secret of other adoptive parents out there and I am just the one with the big enough mouth to say it. Okay, here I go.

I have attachment issues
.

Yes, me. Not my daughter (our second adoption), although she has her own set of attachment issues, too. But I am talking about me. After a year and a half, my heart still struggles to latch on firmly, to feel free and open with her, to feel the wonderful bonded feeling of being completely attached in heart and spirit to another person. I still catch myself looking blankly at her, wondering if I even know her yet. I am still more easily frustrated by her, less patient, slower to forgive and recover after she misbehaves. I still have to fight feelings of wanting to pay more attention to the children with whom it is easier to feel close. And sometimes I am the one who can go without contact with her and not feel like I even miss her absence.

Before you lynch me, before you throw me to the Yahoo group trash bin, before you black list my name to every agency on planet earth and turn me in to Dr. Phil and his evil message boards.

Let me leave you with some thoughts just in case this strange phenomenon ever lurks its way into your adoption fantasy and threatens to turn it into a nightmare.

There are many reasons an adoptive parent may experience difficulty in bonding with their new child. Post-adoption depression is actually a term used now by many therapists and experts in the field. Below are some possible reasons a parent might struggle with bonding:

This is, of course, only a partial list of the myriad of possible reasons a parent may feel that block that prevents the free-flow of emotion from parent to child. It is a list that we could mark off multiple items that relate to our experience. When we adopted our daughter, she was 3.5 years old. While she still had much of the baby look to her rounded cheeks and pixie face, her behaviors were not in any way like a baby. When I tried to follow the advice of re-parenting her (treating the new child like a baby in certain ways), it only became a source of frustration for us both. She would bite the bottles or pacifiers until she chewed them off, she would regress and wet her pants since she thought that was what I wanted her to do (behave like her little sister), and all the effort didn't produce any real feelings of change in either one of us because she seemed to grasp that she was really not a baby and didn't particularly want to be treated like one.

Another issue we faced was that it was an out-of-birth-order adoption. Although there are many successful cases of this type of adoption and we do not regret having done it ourselves, it certainly presented us with challenges. Our younger daughter still needed to be babied in some ways, and it was tough to make sure that our new daughter was receiving the amount of attention she needed. In addition, you really can't trick your mind into seeing a child who is not the baby as a baby. We were learning firsthand how those critical baby years form that soft foundation of bonding before you have to face the more difficult toddler years with a child. Yet we had missed all of that with her and were thrown head-first into the tougher toddler years.

Communication was also a great hurdle for us as our daughter came to us not only as an older child who had learned over 3 years of Mandarin, but as a child with cleft lip and palate that severely impaired her ability to speak at all. Once again, I was startled to realize something we take for granted in parenting other children that is such a vital key to successful bonding was missing in our relationship with her. Even now, if you ask her why she is crying, she can rarely answer you. All you get is, Um..um..I'm crying! Language and communication are the cornerstones of relationships and it is very tough to find alternate ways of communicating with a child who is impaired in a way that truly brings understanding and the ability to form bonds and attachments.

Perhaps the most critical key to understanding my struggle to bond to my daughter, however, is to understand the struggle we had to get our first daughter to attach to us and how that struggle impacted and scarred my parental psyche. Over time, I have learned and recognized that the awesome weight I bore in the journey to help our first daughter through her struggles left me far more emotionally exhausted and wounded than I had realized at the time we completed our second adoption. After all, Hannah was doing great by the time we adopted again and was getting better everyday. The battle was over (for the most part) and now our new daughter was quiet, gentle and much easier to care for than Hannah had been. How could I not be okay and bond instantly with her?

Yet when the first crying jags started, even though they were not nearly as wild and uncontrollable as had been Hannah's, I found myself holding my new daughter up by her shoulders as she wailed and shrieked, looking her straight in the eyes, and pleading with her, I'M NOT GOING TO DO THIS AGAIN!!! I CAN'T DO THIS AGAIN!!! Red flags should go off at that point. Someone with a megaphone might as well have been screaming at me, SECONDARY POST-TRAUMATIC SYNDROME!!! Of course, I had no idea what that even was at the time. It took a few late nights of internet searching before I recognized it several months after it began to surface. My heart had been greatly wounded before, and now my emotions and spirit were struggling to bear up under another child's journey through grief.

Strategies for Navigating the Journey to Attach with Your Child

After months of agonizing over the lack of attachment I felt towards my daughter, we slowly began to piece together some strategies that we hoped would eventually build the necessary bonds between us. Over time, we noticed small changes that eventually led to even more significant changes. Though the process is slow, the effort and energy we have expended has always eventually paid off. Here are some of the strategies we used that have contributed to the growing bonds between us:

Finally, and perhaps most importantly, no matter how you feel, no matter what your emotions tell you, after all is said and done and you have done everything you can to change your feelings.just keep moving forward anyway. This may sound simple, trite or ignorant of your needs. I certainly stress the need for you to have time away, time for yourself and time to vent to others. But in the midst of all that, there are many days you have to just realize that you made a choice to bring this child in and whatever you do or do not feel towards that child, love is a choice.

Choosing to love your child mentally even when you do not feel it emotionally is a powerful step in the journey to bonding with your child. The rewards for that choice may not surface immediately. The process may be very slow and lacking in immediate gratification. But every day that my daughter laughs a full belly laugh instead of a weak giggle, every time she spontaneously comes to me with arms open for a kiss and says, I love you, Mommy, every time she comes running to see me when I return home with a giant yell, MOMMY'S HOOOOME!!!, I realize that though the journey is long, we will get there. Though I have doubted at times, I know it is true. What you reap, you will sow and one day I know there will be a bountiful harvest in my relationship with my daughter.

This is not an adoption that was microwavable. I could not create insta-attachment for her or for me. No, this is a relationship that is in a long, long simmer. Every once in awhile I get a whiff of what it will eventually be. I cannot wait to taste it fully, but until then, I will keep kissing her good-night, brushing her long, beautiful hair, biting my tongue when I'm frustrated, and hugging her just as fully as I do my other children. She's worth the wait. I hope she thinks I am, too.

P.S. I intentionally left my daughter's name out of this article. It may sound silly as I'm sure I've used her name in other articles. But I felt I at least owed her a little privacy in this particular article considering the candor with which I am expressing our struggles.

Dawn G. Choate and her husband are the parents of 5 children, including 2 born in China and 1 in Guatemala . A writer, speaker and advocate for adoption-related issues, Dawn is the founder of Healing Hannah Ministries Please visit www.youtube.com/user/fisherdawn to view the Healing Hannah videos. Dawn is a frequent contributor to Voices of Adoption