Adopting a Child with Cerebral Palsy 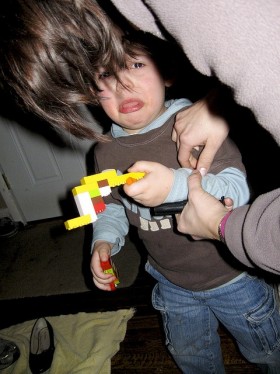 Struggle Over Control for Adoptive Children

Kids like to be in control. But, unfortunately, so many things are chosen for a child that they can often feel out of control of their own lives. Children don’t get to choose whether or not they go to school, where they live, or with whom they live. I remember when I was a child that I could not wait to be an adult so I could have the freedom to do what I wanted to do. It is important for parents to find ways for their children to feel empowered and in control of their lives so there is not a constant battle over control. Parents should not focus on controlling their children, but they can control the situation.

Recently, my son made a choice that he regretted. I’ve been there and I felt badly for him. But, unfortunately, once the decision was made it couldn’t be undone and he missed out on something really fun. “With great power comes great responsibility.” In other words, the power to choose comes with the stress of making the right choice. This was a hard lesson for my son to learn. He felt out of control, because he was unable to do what he wanted. For a five year old this can be devastating and the situation ended with crying and feelings of helplessness. We talked to him about the choice he made and helped him to learn from his mistake. To help him think about his decisions we asked him questions. For example, “When you decided to miss out on going with your brother, was that a good choice?” “How did it make you feel?” “What other choice could you have made instead?” “What do you think you will do next time?”

Although, my son couldn’t have control over that particular situation, we were able to get him back on track by empowering him to make other choices. For example, he could choose what he was going to wear, what songs we listened to, where we were going to eat that evening, and what games we played. We also wanted to get his mind off of the negative surrounding the situation and we were able to do this by creating a little distraction. My son is very creative and loves to make up stories, so we asked him if he wanted to make up a story. He didn’t want to because he was upset, but he wanted us to and we were happy to play along. We started out, “Once upon a time there lived a duck named Howard…” but he didn’t like that story and decided that he wanted the story to be about Mario, Luigi and Bowser instead, so we followed his lead. Slowly, he became more and more involved in controlling and manipulating the story so that it became what he wanted it to be. He became less focused on losing out on a fun opportunity.

My husband and I chose to give our son some control when he was feeling helpless instead of taking the control away from him. Sometimes parents feel like they need to “be in charge” and children should do what the parents say “because I said so,” but it is important to share control in order to help your child feel empowered. By giving the child back power and control it creates a sense of love and respect. I want to work with my child, not against him. I want him to feel like his opinions are important. That doesn’t mean he always gets his way, but I want to encourage him to voice his feelings, fears, opinions, concerns and feel like he can share them with me without judgment and we can work together to find a solution.

My husband and I have opted to share power with our children instead of a more authoritarian parenting style because we do not want them to behave out of fear. Instead we want to have open communication with them, understand what is motivating their behavior, and give them tools to be successful. If you haven’t read The Connected Child, by Karyn Purvis, David Cross and Wendy Lyons Sunshine, I highly recommend it. It is full of ways to empower your child and create a trusting relationship.

This may be a different way of parenting but it is one that creates trust within the parent-child relationship. When parenting a child who has joined your family through adoption, traditional parenting strategies are not always effective. Adoptive children who have experienced trauma on some level need to be empowered and given back some of the control that was taken from them. A child joins a family through adoption out of loss, whether that is their family, friends, culture or many other things. They may feel out of control and helpless. It may be difficult for them to trust. Parents can share control with their child in order to create a relationship built on trust.