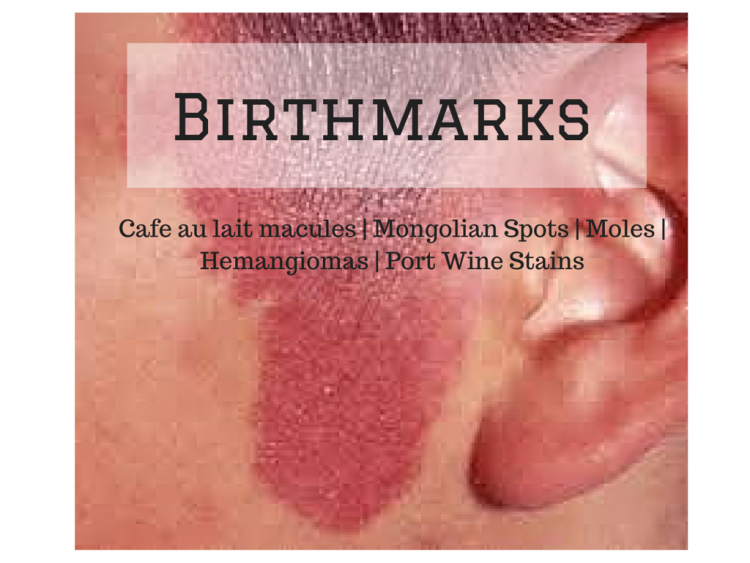 Birthmarks is a general term for marks on the skin that are present from birth. These can be pigmented (colored) and/or vascular (involving blood vessels) in nature. Some examples of birthmarks that we see noted on preadoption referrals:

Many birthmarks are simply cosmetic in nature, meaning that there are minimal to no medical implications and the main concern is if the child is bothered by the appearance. If there are associated medical issues or if the appearance is concerning, some birthmarks may be treated with laser surgery, medications or traditional surgery... However, if a birthmark is listed as a special need or gets the child into a waiting child program, then the birthmark is likely to be fairly significant.

One of the main things that we need to screen for with birthmarks is something called neurocutaneous disorders: “Neuro” for brain and “cutaneous” for skin, meaning that sometimes when birthmarks are present, they may indicate a greater syndrome that could involve the brain. The number of birthmarks present, size or the placement of the birthmark on the body can all have a significant impact on the probability of other associated issues and/or a neurocutaneous disorder. Most hemangiomas, shrink and go away without interventions over months to years. Others respond to medicines that can help to shrink the birthmark faster if needed for appearance or if it is impacting eyesight or causing bleeding or pain. Birthmarks rarely require surgical removal unless it is for cosmetic reasons, or if the birthmark is interfering with vision or breathing.

There are multiple potential associations with birthmarks. A few of the more common but more serious birthmarks seen in preadoption referrals are briefly described below:

Congenital Melanocytic Nevi: A birthmark sometimes called a “mole” that can vary in color, size and may have hair that is present. They are classified by size as small <1.5cm, medium 1.5cm-19.9cm, large/giant 20cm or greater.1 Small and medium nevi need consultation with dermatology and removal may be recommended depending on the appearance and location as they have a small (0.7%) malignant potential over the baseline population. Giant nevi can cover large areas of the body and removal, if pursued, typically requires multiple surgical procedures involving skin expanders and grafts. Thave a much higher chance of developing into melanoma, but the risk is estimated to be < 5%. 2,3 Children otherwise have normal potential for learning, growth and attachment.

Neurofibromatosis type 1 (NF1): A genetic disease that can occur as the result of a new mutation in the affected individual without a family history or be expressed more severely in different members of a family, even with the same genetics. Therefore a parent with more mild symptoms, may have a child with more severe symptoms. The main initial symptoms in childhood are typically birthmark(s) called café au lait macules (“coffee with milk” or CALM). CALM’s can evolve and appear in early childhood without other signs of NF1, and multiple CALM’s in a young child, even if full NF1 criteria have not been met, is a reason for caution. There are a spectrum of symptoms and problems that accompany NF1 (Bone, spine, GI, brain, eye, heart, hormones), but one of the main problems can be “benign” tumors that grow in the brain and central nervous system and can cause learning problems, seizures and can require surgical removal.4

Sturge Weber Syndrome (SWS): This is characterized by a trio of port-wine stains, abnormalities of the linings of the brain (meninges) and increased pressure in the eye (congenital glaucoma). Isolated port-wine stains can be simple, reddened, cosmetic birthmarks that do not cause issues. However when they appear in a characteristic area on the face (Cranial nerve 5, over the eyelid and forehead) they are highly associated with SWS. If the port wine stain does have associated brain abnormalities, then the child can develop seizures and epilepsy (90%), developmental delays and mental retardation (50%).5

The first main consideration in adopting a child with birthmark(s) is the cosmetic adjustment and psychosocial impact on a child’s self esteem. Simple birthmarks alone are typically very manageable with dermatology monitoring or some other interventions. However, screening should be done by an experienced physician to look at whether the birthmarks herald a greater syndrome that may include the rest of the body and especially, the ability of the brain to function in the normal range. If greater complexity is involved, then parents would need to consider if they have the resources to assist with educational, medical and surgical interventions that may be ongoing or lifelong.