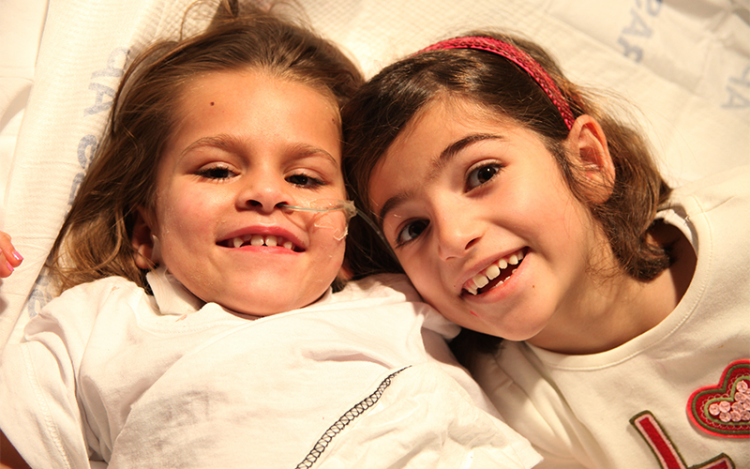 The day we met Ella in Armenia in May 2014, she told us, "I have a best friend named Lilit and I want you to meet her."  The next morning at the orphanage, we had the opportunity to do so and it was immediately obvious to us that these two girls were very close.  We knew that their friendship would likely be Ella's biggest emotional loss caused by our adoption.  By the time we picked up Ella in October 2014, Lilit had been transferred to an older child orphanage where the girls would probably have gone together had we not found Ella in time. Over the next year and a half, as Ella learned English and was able to share more about her life in Armenia, she continually spoke to us of Lilit, of her love for her, her worry about her health, the day they were separated, and the experiences they had together.  Ella requested we place Lilit's picture on the wall beside her bed and even wondered if Lilit could become her sister via adoption.

Lilit was born in Armenia in 2007 and diagnosed with severe scoliosis. Due to this condition, Lilit was placed in an orphanage at ten days old.  There, she grew and learned, played and sang, laughed and cried, and had many friends. However medical treatment was not available to her.  In January 2016, after months of planning, the Society for Orphaned Armenian Relief (SOAR) and the Harold and Josephine Gulamerian Armenian Orphan Fund brought Lilit to New York City to receive life-saving surgery as well as a chance to reunite with her best friend.

Over Presidents' Day weekend, our family traveled to Manhattan to spend a few days with Lilit.  We knew that it would be an emotional time for the girls and that Lilit's state of recovery as well as Ella's loss of the Armenian language would complicate their reunion, but we also felt that it was important for both of them to reconnect.

Over the long weekend, the girls played together, did crafts, shared meals, scared nurses, handed out Valentines, took side by side naps, looked at photos and videos of their years in Gyumri, and spent lots of time beautifying themselves.  Lilit also confirmed many stories that Ella had told us.

The girls are shockingly alike in their preferences and many personality traits and solidly bound by six years shared in an orphanage.  We hope that from now on, they will be allowed to maintain contact, regardless of what the future holds for them, because the past and the deep connection that they have in common can never be forgotten or diminished.

Today, Lilit is recovering from her surgery at a rehab facility in Manhattan.  To read more about Lilit's story, please visit Lilit In America.


HOPSCOTCH ADOPTIONS, INC is a HAGUE accredited adoption agency with active programs in: ARMENIA, BULGARIA, GEORGIA, GHANA, GUYANA, MOROCCO, SERBIA and UKRAINE. Also assisting on a case by case basis: PAKISTAN & KINSHIP Adoption from any country.  We assist in the placement of children into nurturing, prepared and stable families from these countries. Hopscotch can assist any family in the US and abroad, US citizens and non-US citizens, if the country of residence so permits. Hopscotch also provides HOME STUDY SERVICES, education and post placement services for residents of NORTH CAROLINA and NEW YORK or families residing abroad. Contact us today to begin your adoption journey!