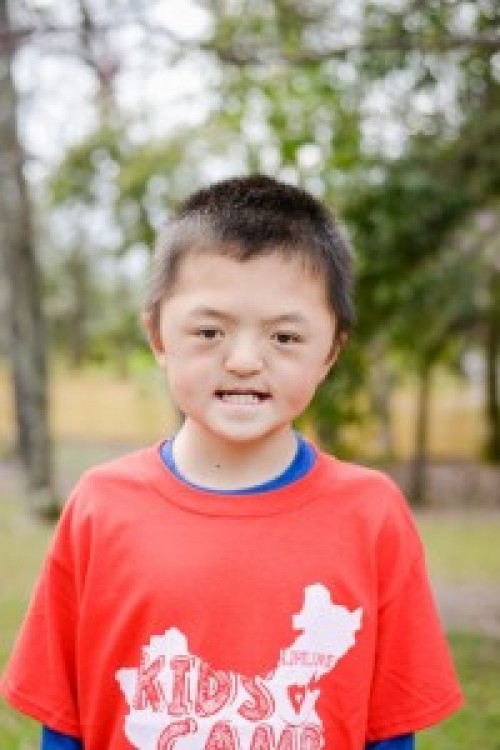 From this sweet boy's file: “I agree to be adopted by dad and mom.”

Oh precious Kaden, I pray your dad and mom will find you very soon!

Please read these write ups from a few volunteers who spent time with precious Kaden at camp. If you have any questions about Kaden contact Jenna Parker for more information!

Kaden- When we first received Kaden’s picture, I knew this boy was something special. Through his picture alone, I could tell that he was kind, had self-confidence, and was proud of who he was. I loved getting to know Kaden during camp. From the beginning, he stuck out to me as mature and caring. The first night the kids were here, he flipped through a book in bed before calling it a night and rolling over. While the other boys were jumping on their beds and playing with toys, Kaden was content to read and knew when he was tired.

Kaden loved to explore and experience new things. He happily bounced from one activity to the next. He never spent much time at one activity—he liked to float around. Kaden has webbed hands, but he does not let that effect what he can and cannot do. Kaden was running along with the other boys, playing catch, riding scooters, and building with blocks. One afternoon, we had stations set up outside and Kaden happily created animals using colored “paper tiles.” The paper was small, thin, and slick, which made me think that he might get frustrated at this station. I was amazed at Kaden’s concentration and fine motor skills--- he carefully placed each tile in the proper spot.

Kaden is kind. He cared about the children who were around him. Kaden became quick friends with Kai. They stuck together throughout most of camp. Kaden was an encouragement to Kai during medical appointments. I loved watching their friendship. Kaden played cheerfully with the other boys and even helped them stand up when they fell down.

Kaden is hilarious. He has so much personality! When we were at church on Sunday morning, the Sunday School teacher played a dance video and Kaden loved it! He loves to dance. We danced again at music class in Atlanta. The teacher played 4 songs back-to-back and Kaden was always the first one to start dancing. He caught on to the moves and lyrics so quickly. At the end of the 4 songs, Kaden fell on the floor and wiped his brow (like he was worn out)--- he was so funny!

The boys each received a Transformer during their birthday party. Kaden was obsessed with his. He went everywhere with us. To dinner, to Atlanta, the Georgia Welcome Center, the horse farm—he was always with Kaden. Over the course of our busy camp schedule, Kaden’s Transformer got misplaced. Kaden never said anything about. On the last day of camp, I was cleaning up a storage room and found a bag with Kaden’s name on it and inside was his Transformer. The kids were supposed to be resting in their rooms, but I could hear the boys playing. When I gave Kaden his transformer and jumped out of bed and said something along the lines of “Where did you find this?!” He was thrilled to have his Transformer back and quickly shared his excited with his friend Kai.

Kaden knows Jesus! One of my very favorite moments was watching Kaden at church. At church we were singing hymns and tears rolled down my face as sweet Kaden was singing every word of “Great is Thy Faithfulness.” I loved seeing Kaden respond to the Bible stories we shared throughout camp. He knew these stories and was able to answer questions. The children got to be the characters of the Christmas story during our Christmas celebration. Kaden was a wiseman. He hopped up on stage and knew when it was his turn to shine!

Kaden is kind, special, thoughtful, steady, and adventurous. I am so thankful for the opportunity to get to know Kaden through camp.

I was just emailing you to share a short story about one very special boy Kaden, who I had the pleasure of being buddies with. When I was paired with him to help him out with all the evening's activities, I was unsure of whether or not he would want to hold my hand, seeing that his thumb seemed to be the only finger that was fully formed. After introducing myself, however, he reached over and grabbed my hand with confidence, unaware that it meant so much to me to hold his little hand in mine. As we began the activities, I was again concerned that he would struggle to do the things that the other children could do with their fully functioning hands.

Instead, Kaden proved me wrong once again. I remember at one point he was trying to peel stickers and draw with markers and, after waving my helping hands away, was able to perform all these activities just as well as the other children in about the same amount of time! I remember sitting there with him just with my mouth open, amazed at how he was able to overcome his disability with such ease. Another quality that makes Kaden so special is his ability to form such a strong connection with the other children. After meeting another little boy only days earlier, they immediately became best friends. When the children received their Christmas presents while celebrating the holidays, Kaden simply sat there with his present in his lap. After trying to get him to open it, I was told by one of the translators that he wouldn't open his present until he was with his friend. I couldn't help but laugh as I brought him to his friend and they proceeded to rip into their presents together, smiling and laughing as they experienced this special time together. Kaden is such a special boy and I'm so grateful I had the pleasure of meeting him and experiencing this unique kind of strength and love.

Kaden – This nugget! He is so calm and so relaxed. He got along very well with the other children. He was very interested in trying out all kinds of things. He never seemed to let his webbed hands stop him – he is independent and determined to try on his own! I was amazed at all of the things he was able to do independently! He was hit in the face with a ball while the kids were playing. He caused him to have a terrible bloody nose….he remained so calm through all of it and was completely cooperative in anything we asked him to do. I tried to think how I would feel in that situation (bleeding pretty badly, surrounded by people speaking a different language, with their hands all in my face) and I think little Kaden handled it much better than I would have as an adult. Kaden is going to be a tremendous blessing for a family who is willing to open their hearts to him!

Please Look at where Kaden lives in China!  View it below to hear Frances Chan talking about it... if you look close you will find Kaden in the video! Amazing!!!