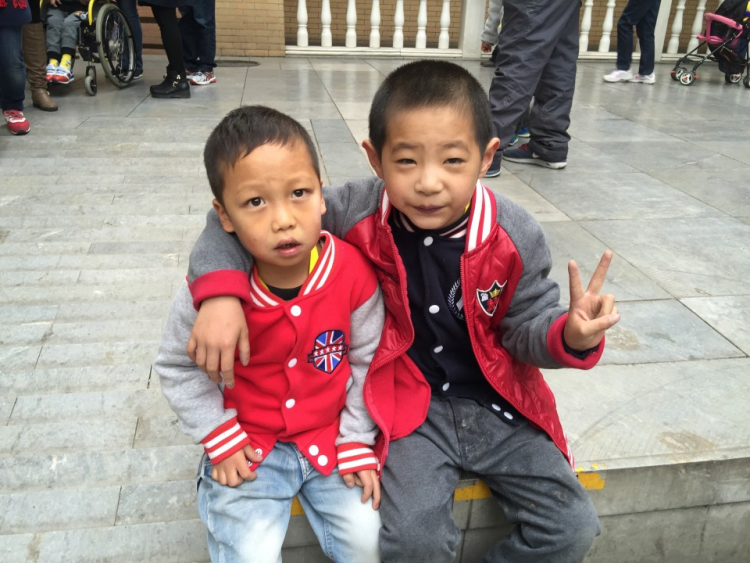 Children with congenital heart disease (CHD) have a very special place in my heart as my husband and I have adopted four CHD children from China. So it was wonderful to be invited to participate in Holt’s ambassador project in Beijing and to be partnered with two beautiful boys in the care home who were born with complex CHD. Prior to my departure for China, the organization I direct, Little Hearts Medical, provided a cardiac case summary of each child to assist in advocacy efforts. But because these children are so much more than the medical diagnosis attached to them, the goal of the project — getting to know each child in order to be able to speak with prospective families about their individual personalities — will help so much in home-finding efforts. The first little boy I met, Lile*, is almost 8 years old. Lile is a simply precious child. He is exceptionally sensitive, perceptive and generous. Kind to other children, Lile always made sure that nobody was left out and that everyone was taken care of. I watched as he noticed a toddler who had been inadvertently left out of an activity. Lile walked over to her, took her by the hand and gently guided her to the fun!

No familes have called wanting to learn more about him or see his file.  And I can't help but be convinced that if ten families spent a day with him, there would be ten families fighting over who would be blessed to get to call Lile their son.  He is really that special. -Andrea, Holt Ambassador

A real go-getter, his hand was the first to be raised when we asked for volunteers/participants during group activities. This little guy loves to be right in the midst of whatever is going on. Shy is not a word I would ever use to describe this energetic child! He particularly enjoyed our outing to the zoo, where he exclaimed in delight at all the animals he saw!

This sweet boy won my heart and my fervent wish is for him to know the love of a family and the hope that such a family will be able to provide the care that he needs!

Giving and generous, when he saw a particular food absent from someone’s plate at our table, he would take food from his own plate and give it to the other. He shared without hesitation, taking delight in watching others fill their own bellies. Lile dreams of becoming a chef when he grows up. His energy was good considering his cyanotic state. When he got tired, he would pull down his shirt to expose his surgical scar — communicating that he was tired and needed to rest or be carried.

Lile’s cardiac diagnosis is not clear. His initial echocardiogram at 2 years of age showed TOF, four heart defects that often occur together. But his latest echo from September showed more complex anatomy believed to be truncus arteriosus, semi-truncus or pulmonary atresia/VSD/MAPCAs. He had a central shunt to the pulmonary artery placed two years ago, but appears to have outgrown it.

The second precious child I had the privilege of getting to know is Eugene*, a cheerful and positively adorable little boy who will turn 6 in February!

Did I mention that he is absolutely adorable?

He has an impish grin but he is 100 percent sweet! Eugene impressed us all with his artistic ability and concentration. He was able to create clay animals in only a few minutes after looking at a picture in the activity booklet.

He loves to sing, blow bubbles, chew gum, color/draw and play on a tablet. He’s a snuggle bug and would thrive within the love and attention of his very own family! Eugene dreams of becoming a teacher when he grows up. Eugene has complex congenital heart disease. An assessment by one of our Little Hearts Medical pediatric cardiologists of his September 2015 echocardiogram has led to the tentative diagnosis of Double Outlet Right Ventricle with Malposition of the Great Arteries.

I will cherish the time I spent with the entire group of children we worked with. They are, each and every one, perfectly wonderful and deserving of a family. I felt honored to have been included in their world even for such a short time. I hope that you will feel led to bring one of these children into your heart and home!

*Names have been changed

To learn more about Lile and Eugene, contact Jessica Zeeb at jessicaz@holtinternational.org.