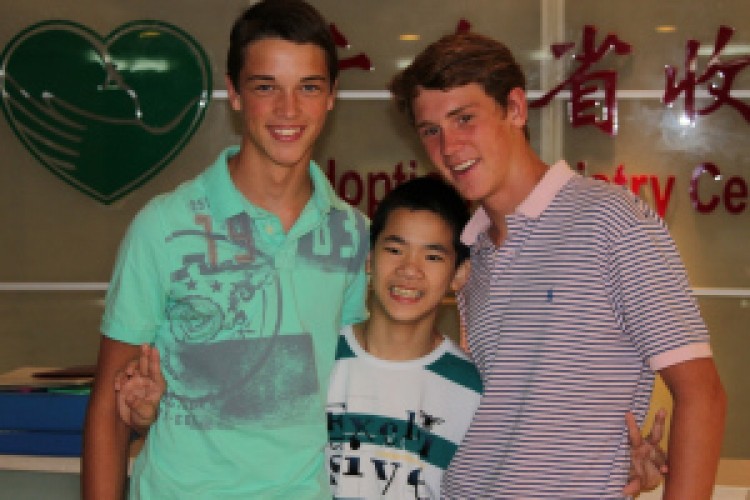 Doug and Deanne W. are seasoned veterans of the adoption process. Still, Deanne admits, she was nervous as she awaited the arrival of her new son, Scott, from China. When the W. family decided to adopt again in 2012, they felt a strong connection to Scott, age 14, a young boy diagnosed with cerebral palsy. They knew well the challenges of adopting an older child who has been raised in an institution, but they felt ready to embrace Scott as their own. “He was meant to come to our family,” says Deanne. “I had peace knowing this was the right thing to do. Still, I was anxious.”

There are lots of unknowns in any adoption, but adopting an older child brings a unique set of complexities. Children who have grown up in orphanages can experience significant emotional, physical, and relational challenges. They process the transition to a new family in different ways than babies or toddlers do. Sometimes, this experience can be very painful for families. In preparation for Scott’s arrival, the W. family learned all they could about older child adoptions. They had observed adoptions of older children that hadn’t worked out well, so they prepared for the worst while hoping for the best. “We went in with our eyes wide open,” says Deanne.

When the time came to go to China to bring Scott home, Deanne stayed back in Utah with the younger children, while Doug traveled with their two teenage sons for a “boys trip” to bring home their new brother. During the family’s time apart, Deanne says she experienced an intense time at home. The family car broke down. One of her little boys used the family pool as a bathroom. Things just seemed out of whack. “I didn’t have a lot of opportunity to anticipate the joy [of Scott’s arrival]. I was just trying to hold it together at home,” she says. Deanne looked at pictures of Scott, reread his files, reassuring herself that all would be well. “I had heard all the great things about this child,” says Deanne. “He had great potential. Who was I to back out because of my fear?”

Three months later, Scott’s integration into the W. family is nothing short of miraculous. Scott knows no English, so the family does a lot of pantomine to communicate. Though from China, he does not speak Mandarin, so traditional translation services haven’t helped the family much. Scott has been forced to learn English on the fly. Still, with this and other challenges the W. family has been knit together to include this new member. “Scott so badly wants to fit in and love others and be loved,” says Deanne. “I know there is a honeymoon period, and it should be ending. But I don’t think we’re going to experience it this time.” Deanne has been thrilled to see her older children embrace Scott with amazing love, love that has changed Scott and has changed them, she says, for good.

Deanne and Doug know that adopted older children and their families often have difficult journeys. To head off those complications, the W. family has done significant reprioritizing since getting home from China. They’ve cleared their calendar, giving special time to bonding. Deanne is an enthusiastic advocate for older child adoption. She encourages prospective families to get educated, to maintain a hopeful attitude but to be aware of the difficulties that are a real possibility. “Make sure you’re prepared to keep putting your heart out,” says Deanne. “I have to go through this whole experience telling myself, it’s not about me.”

When she talks about Scott, Deanne exudes love for her new son and hope for his future. “He is a treasure,” she says. “It was definitely worth it. We have given him a chance at life. He will have success.” 4 Myths You May be Telling Yourself About Parenthood through Adoption


How To Adopt, Adoption Advocacy