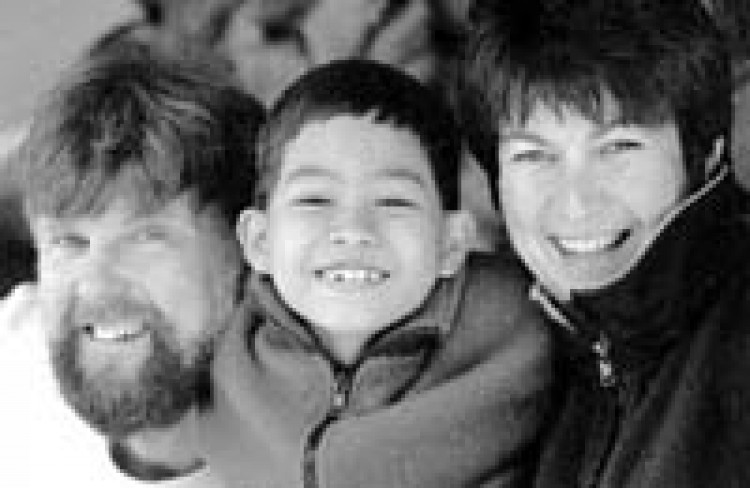 Little did I know as I headed out the door on Friday, April 9th, to make the two-hour trip to Boston to accompany my mother to a routine appointment, that I would return home that evening to tell my husband that I had found our son. His name is Raul, he was seven years old, and he was living in the Philippines. Our adoption journey had been long and at times painfully frustrating - full of starts and stops - but a "ten-minute side trip" to WHFC that fateful day changed our world.

Scott and I were married when we were in our late thirties. We wanted children, but we did not feel strongly about having an infant. We felt that, because of our age, an older child might be the right choice for us. My oldest and dearest friends adopted their wonderful daughter from India, sixteen years ago, through WHFC. When another friend handed me the WHFC phone number one day, we decided it was fate, gave the agency a call, and reserved a place at the next General Information meeting. Time was passing, but we were hesitant to fill out the application because Scott had just begun to build our house and we were a long way from being finished. Someone at the first meeting said, "Don't wait - the home study can be done without a finished home." We went ahead, posted a "Do Not Lean" sign on the unsecured stairway railing, and put cookies in the oven. The social worker came and, based on what she saw of the kitchen and two finished bedrooms, wrote about the lovely decor! We were on our way.

We had begun our search in Costa Rica. We continued to build the house. The months dragged on. Finally, we received news that the Costa Rica program had shut down - all that time wasted. I was tired, discouraged, and ready to give up, but Scott wanted to keep searching - he had faith that our child was somewhere in the world - waiting for us just as we were waiting for him or her. A short while later we learned that the Philippines would be an option for us. The next day, while traveling to Boston, I asked my mother if she would mind a "ten-minute side trip" to WHFC. She was delighted. Mary Lou Eshelman dropped everything, and we spent the next hour and a half pouring over photos and profiles. And there was Raul. Two hours later, when I returned home, I announced to Scott that I had found our son! Because we had intended to adopt a preschool aged child, I rationalized my decision in a dozen ways, but the simple truth was that Raul had already captured my heart - he was our son. Scott eagerly agreed, and on Monday we asked Mary Lou to begin the paperwork. The long wait had been for a reason - we had been waiting for Raul. All it took was a leap of faith. Still, we had questions and concerns. I scoured the paperwork I was given, looking for clues into Raul's personality. I spent countless hours staring at the two pictures we had, to see if I could see some hint of what was behind his eyes. Would we be able to help him cope with his emotional issues? How does one childproof a home for a seven-year-old boy? Above all, could he come to love us?

Scott is the idea person in our family: I am into details. Scott had faith that everything would work out; I wanted to shore up our chances. I put the knives and scissors out of sight, Scott installed locks on the medicine cabinet and basement door, and we placed the dangerous cleaning liquids on high shelves. We read more books, and talked with as many people as we could identify who adopted older boys. We painted rainbow shelves. For every step in preparation we took, there were ten more left undone.

At last, the day came when we were told we could send care packages to Raul. We took photos, wrote notes, and carefully put together miniature albums, trying to give Raul a glimpse into what his future held. We hoped and prayed that Raul would want to be with us as much as we wanted him to be here. And then we received word that we could travel. It all happened so fast. The night before leaving, we sat on the floor, surrounded by piles of clothes, toiletries and toys, trying to remember all of the great tips we had been given. The telephone rang long into the night with best wishes from family and friends. We were too excited to feel the exhaustion.

We were thrilled to learn that we would be in Manila with three other couples from WHFC, and made arrangements to meet one couple in Detroit with whom we could travel the remaining distance. We got off the plane to the expected heat, humidity and smog in the city, but the Philippine people are hard working, generous and warm, and we were immediately made to feel welcome. Two days later, our WHFC liaison picked us up early in the morning and brought us to Saint Rita Orphanage to meet Raul. There he was - his fresh haircut slicked down, wearing jeans and the T-shirt we had sent to him months earlier. What was he thinking? He came over and placed our hands against his forehead - a sign of respect. He shyly showed us around, and demonstrated no signs of sadness at leaving his friends and the only home he had ever known. We marveled at the fortitude of this small person. Then I heard a tiny voice say "Mommy" and it slowly washed over me that Raul was talking to me.

Six days later, we arrived at Manchester airport in the driving winds and rain of Hurricane Floyd, and one hour later pulled up to a dark and cold house. We lit candles and grabbed flashlights and watched Raul explore his new home. First he checked for rodents under the couches - there were none - and then he set off to find his bedroom. As we all snuggled together under the big down comforter for our first night as a forever family, Scott and I could not believe our good fortune. Five months later, it is hard to remember a time when Raul was not a part of our family.

Raul accompanies us everywhere - he is kind, respectful, curious, smart and funny - and approaches every new adventure with a joy that makes our hearts soar. His trust in us is remarkable. If he is hesitant, he looks our way for reassurance and then moves forward - all on a leap of faith. We communicate with words, gestures and glances. We share a bond that grows stronger with each passing day.

In the short time that he has been home, Raul has learned to play soccer, bowl, skate, snowshoe, ski and make awesome snowmen. He can identify every Pokemon creature. He loves all things electronic, and has not once tried to drink cleaning fluids! It makes me laugh when I think of all the horrendous scenarios I imagined. In reality, he makes us appreciate everything anew, and we take time to enjoy the simpler things, like making snowflakes for the windows and watching videos together on Friday nights.

Raul's English improves daily, and he corresponds regularly with three friends with whom he grew up at St. Rita's - one each in Massachusetts, Virginia and Canada. Raul turned eight in December. We called Saint Rita's and his friends sang "Happy Birthday" to him. He beamed, and then he cried. Finding a place for his past amidst his present brings quiet moments - but we cherish these times to learn more about Raul and help him to understand the love and permanence of our family. Our earlier concerns have faded only to be replaced with worry and joy - the constant emotions that all parents feel for their child as long as they breathe. And all it took was a phone call.