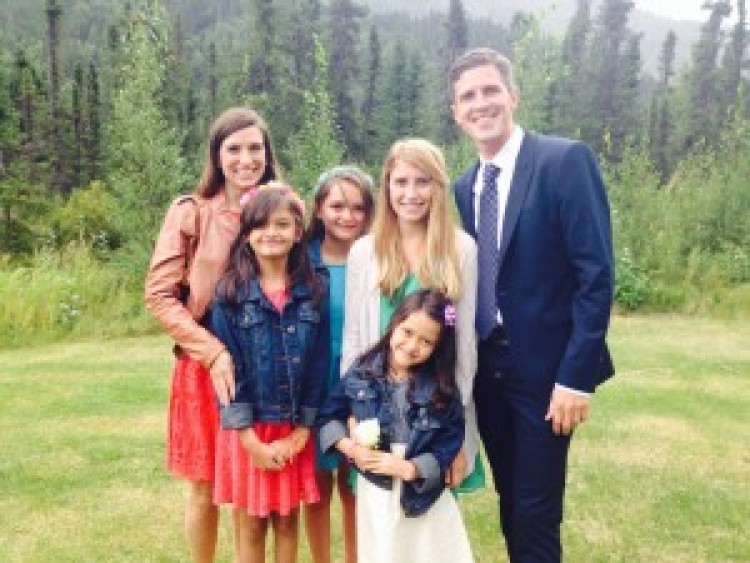 When Todd opened an e-mail from AGCI with the subject, One Wish For Three Sisters, he didn’t know he would be looking at his soon-to-be daughters. But God had other plans! And just 6 months later, Todd and Monique met their daughters!

Todd and Monique always thought adoption could be a good fit for their family—Todd and two of his brothers were adopted. But as often happens, time passed and life got in the way. Following a complicated pregnancy, Todd and Monique welcomed their first child, and put their energies into raising their daughter. As the years went by, Todd and Monique began to think of adopting again.

“All of the sudden we had a 14-year-old daughter and going back to having babies wasn’t probably going to happen,” Todd said. “We didn’t really do much initially. We tried to adopt through a foster to adopt
situation. She lived with us for a year and we had a good relationship with her but ultimately she decided that she didn’t want to be adopted. It was a sad situation and made us question whether or not we were going to try again for something like that.”

While they had discussed international adoption, they weren’t sure it was for them. “I found AGCI’s site and just filled out the free pre-application. We were then able to get a bit more information and see the kids who were waiting. We were just trying to learn a bit more about the process. They added us to their email lists to keep us up-to-date on what was going on. This was about 2 years ago,” Todd said. “I didn’t really check my email that often, so I wasn’t really keeping up with it.”

Days before Christmas 2015, Todd was looking through his emails to ensure that the gifts he had ordered would arrive in time, when he decided to open an email from AGCI.

“I opened it and immediately felt like they were our daughters. Their picture and their story were just super touching,” Todd said. “Because of our situation and their age, it just hit me that this was something we could and should do.”

Todd sent the email to his wife and after praying about it, they both felt strongly that these girls were meant to be their daughters. After their experience with foster care, they were aware that kids’ stories can be complicated. They felt far less intimated and naïve about the realities of adoption and parenting older children.

“We felt like God had prepared us for this situation and gave us the confidence that this was right for our family,” Todd said. “After we confirmed that the girls were still waiting for their forever family, we launched into a high speed version of the adoption process.”

Working through their adoption from Colombia,  “We felt we had a very great understanding of what was coming. Our arrangements were so perfectly orchestrated,” Todd said. “Our experience was very positive, the Children's Center in  Colombia was amazing and they provided great care.”

After first laying eyes on the girls on December 23rd, 2015, Todd and Monique were traveling to Colombia to meet their daughters in person on the 28th of June, 2016! While they spent time getting to know Dayana (12), Laura (11), and Katherin (8) through Skype beforehand, they were still unsure how their first meeting would go.

“We had no expectations,” Todd said. “We decided to just let them lead the situation. We didn’t know what would be most comfortable for them.”

After spending time in Bogota, they are now adjusting to life as a family of 6 back in Alaska! While the family took basic Spanish lessons to help bridge the language barrier, communication is currently their biggest struggle.

“Every day is an adjustment and the communication barrier can be difficult,” Todd said. “It would easier if we all spoke the same language right off the bat, but in some ways it’s a blessing. It prevents us, at least initially, from digging too deep into the heart of things, which at this point should not be a priority. Right now, it’s more important that they feel safe and loved and know that we’re not going anywhere.” The family has found great comfort and encouragement through their support network. “There are so many resources for people adopting,” Todd said. “People are so willing to support you and encourage you. If you’re willing to admit that you can’t do it on your own, it’s a very rewarding experience.”

Happily, the adjustment has also gone smoothly for the Jackson’s biological daughter. “She’s doing really well with it,” Todd said. “She’s excited about not being an only child anymore.”

All in all, everyone is enjoying the process. “It’s amazing how quickly they can adjust. It’s hard, but it’s something that they want.”

Todd and Monique have also found that understanding the “why” has been instrumental to an easier transition. “It’s been so helpful for us to understand why kids who have been through traumatic experiences tend to act the way they do,” Todd said. “My wife has done an amazing job of learning about what happens with kids when they go through some of these experiences. And then when you see things, it’s not as frustrating. It’s still hard, but then you understand what it means.”

The family's advice for those considering adoption?

“Be open-minded about what’s possible. Yes, these kids have been through a lot, but they want the stability, safety and belonging of a family,” Todd said. “You have to be available, if God’s ready to expand your family. Our kids found us, and we’re super blessed to have them in our lives.”

For All Who Answer the Call to Advocate, Thank You!