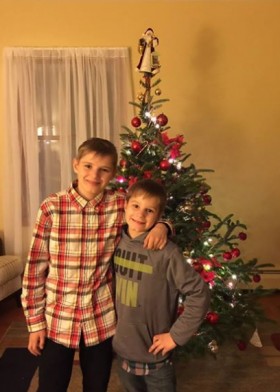 As we took the last trip down the long, bumpy road to the Chui Orphanage, I felt a sense of hope and happiness. After participating in the Host Program and taking several trips to Kyrgyzstan, Danil and Dennis, 9 and 13 respectively, were finally coming home with me forever.

We rounded the corner and Danil was standing outside his dorm waiting for us with a small group of friends. I jumped out of the car and he collapsed into my arms wearing that shy smile that won my heart when he first arrived in the U.S. just over a year ago. After big hugs I saw his brother, Dennis, running toward me from the direction of the Dining Hall. He jumped into my arms, wrapped his arms around my neck and held on so tight. I lifted him up and we danced in a circle while we hugged and even when I put him down, it was clear he didn’t want to let go. He is the best hugger ever.

We took pictures with the Director and Caregivers then ran into Danil’s dorm to say goodbye to his friends. We bounced up the stairs and were greeted by Rasul and Dima. We hugged and then took pictures together. Then they gave me a gift. These beautiful children who have nothing, presented me with a Teddy bear. One of their sole possessions. I have never been so moved by a gift. I hugged them again and I can only hope they felt the love and gratitude. I asked Dennis if he wanted to go say good-bye to his friends. He said he already did because they are at a camp. Then we ran back to the car together because they were really ready to go.

As we drove away, I felt a simultaneous happiness and sadness. I was so happy to be with my boys and they just wanted to hug me and be near me. At the same time, I felt a sadness for the children I had come to love and would not see again for a long time or maybe ever. They are sweet and wonderful children who are full of love and deserve families. If they are not adopted, I shudder to think of what their chances will be in such a poor country when they place out of the orphanage at the tender age of 16 with no family support or higher education.

As the car pulled away, I asked the boys what they were most excited about. Dennis answered immediately (and Tilek translated), “A better life.” That kid. He gets me every time.

Back at the hotel, the boys had nothing but love to show. Each took turns saying, “my mom” to each other in a pretend argument full of smiles and laughs. Then they took turns telling me, “Mom, I love you” and the next would say, “I love you, too” and the other would counter, “I love you 3”, until someone loved me to infinity. It was so sweet.

After all the official consular, medical and Embassy paperwork and visits were finally complete, we headed home to America a day earlier than we expected. The entire flight, Dennis watched the video map of the plane getting closer and closer to America. The moment we landed my boys became American citizens and to top it all off, our entire family surprised us at the airport! It was the best welcoming party of all time!

Wonderful. Magical. Awesome. That has been the journey with our new family so far. They love America and I am so happy that they are old enough to understand and appreciate what that means. It’s a great reminder to me how lucky we are to live here. Sometimes they just spontaneously hug and kiss me and say, "Thank you for America, Mom. Thank you for family." Acclimation comes with some small challenges, but mostly it comes with joy, laughter and happiness. The boys love to sing “America”. They only know the first two words of the song, but somehow that is just perfect.

Every day we work hard to find families for children, and everyone who opens their heart, who shares their love, who welcomes a child into their family is both a hero, and a parent. Being a parent doesn’t get enough credit lately, but it should. Being a good parent is hard work, but that eternal bond that you build with your child, that sparkle in her eyes when she talks ...