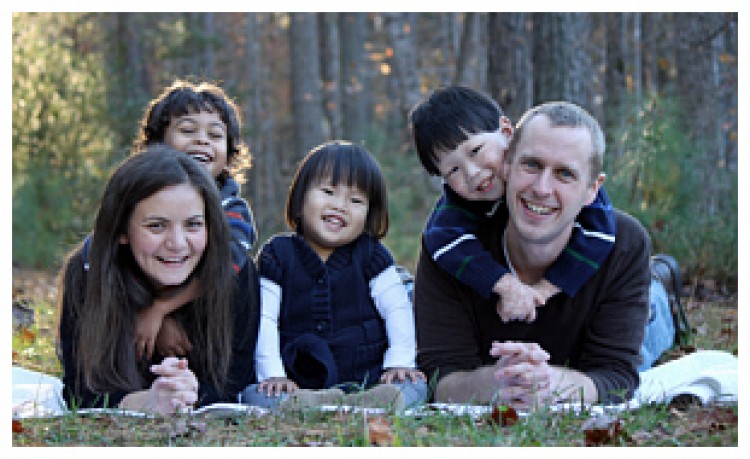 In the adoption process dozens of phone calls and emails are logged back and forth between eager adoptive parents and their placing-agency.  Some communications are general housekeeping reminders; i's to dot and t's to cross. Others are a little more detailed and lengthy.

There is, however, a moment that every adoptive parent will remember forever: That email or phone call that changed their world. They could be painting a room, sitting at their desk, or checking out at the grocery story and suddenly the world tilts and their family grows with the news that a specific child is waiting to come home to them.

"The day we got the phone call will always remain one of the best days of our lives. It came early one morning, as my husband and I were getting ready for work. The agency in Taiwan had matched us with a little boy who, at the time, was 3 ½ years. We were overjoyed and could not wait for the day to bring him home" -Cindy

Wendy Stanley, Gladney Center for Adoption, Director, Asia Program agrees, "I get so excited when a family has been matched."

Taiwan is twelve hours ahead of Gladney's office in New York City so most of the referrals drop into Stanley's inbox while she is fast asleep. She refers to the good news emails greeting her upon arrival in the morning as "a gift that happens overnight." After opening her emails, if a referral has been sent, then a good part of her day is spent reviewing and sharing the information. .

Taiwan is an island nation off the southeastern coast of China in Eastern Asia. It is bordered by the East China Sea, Philippine Sea, South China Sea, and Taiwan Strait. It's land mass is slightly smaller than Delaware and Maryland combined. The predominant language of Taiwan is Mandarin. Of the estimated population of 23.5 million over 90% practice a mixture of Buddhism and Taoism.

With only 1.5% of the population under the poverty line and an estimated 4.5% unemployed, poverty is not the reason for relinquishment as is the case in more underdeveloped countries.

Kim Bernstein, Program Manager at Wide Horizons for Children, Inc. explains, "The reason why children come into care and then available for international adoption are very similar to the histories of children in the US foster care system."

The children relinquished have complex social histories with difficult early life experiences. They are physically "healthy" but it is fairly common to have some developmental delays because of their tough start in life.

Stanley expands on the history of the children coming into care, "They come from difficult situations. We see 'hidden' needs: children that have socio-emotional needs as a result of early experiences of neglect and trauma."

Prospective parents who are flexible or have parenting experience, for example: people who have been around children and can meet a child where he is developmentally, are best suited to adopt from Taiwan.

Children are cared for in small group homes as well as foster homes.

There is no central authority in Taiwanese adoptions as there are in other Hague accredited countries. Each case is looked at individually. There is variation from case to case and agency to agency and flexibility in regards to the adoption timeline and process is highly emphasized. Because of legislative changes in the last few years in regards to the child social welfare there are now less than a dozen Taiwanese organizations licensed to facilitate international adoptions in Taiwan. (Contact US Agencies with Taiwan Adoption Programs)

Taiwanese adoptions stand out as the birth parents are often involved in the adoption matching. Birth parent consent or approval is part of the process by which the local Taiwanese organizations and county governments ready the case for the court adoption process.

"Some of the things we love most about adoption from Taiwan include the possibility of birth family involvement. Our daughter's birth parents were able to be involved in the process. We are able to send them updates, pictures, and videos" -Alexis

Continued communication after placement, between the birth parent and adoptive family, is also coordinated with the agency standing as a go between.

The advent of technology in the overall preparation of the child for adoption has benefited both sides. Cindy, a Wide Horizon parent agrees, "After each Skype session we felt a little closer to our son." She offers this advice, "If you have a similar opportunity we recommend that you look for and share common songs and stories that are translated into multiple languages, like The Very Hungry Caterpillar and Twinkle Twinkle Little Star."

Stanley adds, "The video sessions help start building attachments between the child and the family."

Some families have become very creative while video conferencing with their child half a world away. One Gladney family bought two of the same Lego models, sent one to Taiwan, and during the Skype session with their child built the models "together".

Boys and girls of all ages, sibling groups and waiting children are available. Although not common there are children under the age of 3 available as well. Families requesting children 3-5 years of age will likely wait between one and two years for a referral. The older the child the shorter the wait time for a referral.

Typically the process for a referral is much quicker with waiting children. Families open to a school aged child, a sibling group with a school-aged child or a child with an identified medical need, can request a match with a waiting child and be home with their child in about a year.  Eligibility requirements are generally more flexible, photos and medical information can be reviewed prior to match, and adoption subsidies are often available for waiting children.

One trip of 5-7 days is required. Travel typically happens 10-15 months after receiving the referral, possibly sooner and both parents must travel.

Stanley explains the short amount of time in country travel, "All the paperwork is done. The adoption is complete before the family comes to Taiwan."

Families adopting a younger child can expect to be given physical custody of their child a couple days after arrival. Older children require a subtle and paced transition throughout the week and generally are not in the care of the adoptive parents until later in the week.

There are several agencies in the United States that advocate for orphans in Taiwan. As with all major decisions in life it is highly recommended to do a thorough research on each agency to see which one is the right fit for you.