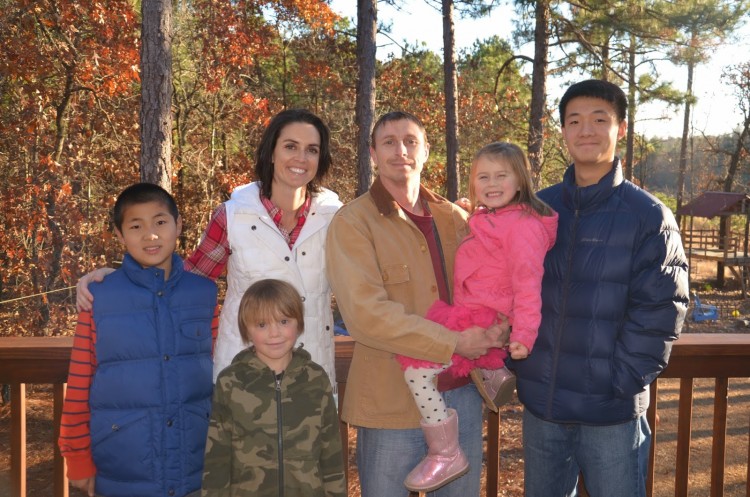 The following story was written by one of Gladney Center for Adoption's great families. We are so happy to see Kai learning and growing and happy with his family!

Our four year journey to adoption took us to some dead ends and on a few very sharp curves but here we are, making it official in July 2014, with our son Kai! We have two biological kids, Cody age 7 and Kelby age 5, and  “planned” to adopt a younger child.  However, in the summer of 2013 Superkids met Kai in China and shortly after that we heard his story and knew that it was God’s plan for Kai to join our family.  Once we made the decision and moved forward things went amazingly smoothly and before we knew it we were on the way to China to meet Kai.

Adopting an older child is scary in its own way, do you hug him when you meet?  Will he want to call us mom and dad? How will we communicate?  Somehow we made it through those fist few crazy weeks in China.  Kai knew almost no English, he could only say “apple” (Thanks, Steve Jobs) and “Oh my God” (Thanks pop culture).  The first few weeks we were home we couldn’t believe how often we went somewhere and ran into someone who spoke  Mandarin and could speak to Kai, dramatically helping his transition.  He started learning English quickly and then our exchange student from Beijing, Bridge, moved in and became our amazing live in translator. Kai started 5th grade at a private school less than three weeks after coming home.  It was very hard for him but he is amazingly light hearted and as the months have gone on he has been able to become more and more integrated with his classmates.  Since he came home, Kai has learned to tie his shoes, ride a bike, swim, share, take turns, play on a soccer team, and use American table manners.  All while learning English! He can almost read in English, he is great at math and he loves art class.  He is such a cheerful person and we can see his resilient spirit every day.  He had so much fun experiencing the holidays from Halloween to Christmas.  In January he celebrated his first ever birthday party!

We are excited to see what is in store for Kai!


Founded over 130 years ago, The Gladney Center for Adoption is a premier, Hague accredited, adoption agency with international and domestic adoption programs. With adoption programs in Asia Gladney is able to help parents adopt children of all ages. In each region that we work, we are excited to offer International Waiting Child Programs to help children who may be older or have a medical need find a loving family and a permanent home. Gladney is able to work with families residing in all 50 U.S. states and provides individualized casework services to each family throughout the adoption process.

Strategies for Building Attachment with Your Newly Adopted Child