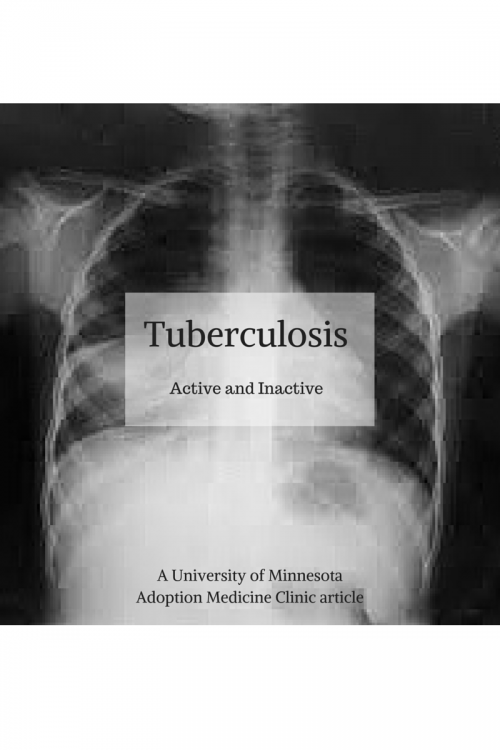 Tuberculosis (TB) is an illness caused by a bacteria called Mycobacterium Tuberculosis. 15-40% of cases of TB in developing countries are in children. TB can be transmitted to children by adults through coughing (airborne) and usually infects the lungs. Symptoms include: cough, night sweats and other respiratory symptoms. In children with compromised immune systems or young infants, in rare cases TB can spread to other organs like the kidneys, spine or brain.

There are many myths and fears regarding TB infection but in general, however, tuberculosis is not something that we as medical professionals consider to be a great barrier to adoption.

Active TB means that there is bacteria present in the body that is actively increasing and causing illness. Older children or adults can transmit it to other people. Active TB can sometimes be resistant to drug treatment but the countries we have worked with in the past for adoptions, TB has been generally amenable to normal drug treatment. Workup usually includes a short hospital stay and then medication treatment at home for a few months while the child goes about a normal lifestyle.

Inactive TB is also called Latent TB Infection or LTBI. This means that the child was exposed to someone who had TB or the child is infected with the TB bacteria but the child is not sick from the TB. This is something we see frequently in children being adopted from other countries by families living in the US. Kids with LTBI do have the potential to become sick and develop symptoms from TB. Therefore, they should receive several months of treatment with medication to prevent them from developing TB but the medication is cheap, easy and well tolerated.

Most frequent questions asked about TB:

1) If I adopt a child with TB can they give it to us or our other children in the home?
Answer: In the past 30 years, there have been no published cases of transmission from children younger than 5yo in the community. 2 If it is inactive TB, it cannot be transmitted to others no matter what the age of the child.

2) Can tuberculosis infection in a child adoptive from a country outside of the US be treated?
Answer: Yes, not only treated, but it can and will be cured.

3) If a child has TB should I worry about long term problems?
Answer: No, TB is generally curable. There are rare cases where TB has caused damage to the lungs but this does not usually affect function. The times when I’m concerned about TB is when it has spread to the brain (ie TB meningitis), spine or other organs but long term issues are rare, case by case and would need to be reviewed by a medical professional. Otherwise the long term outlook is extremely good.