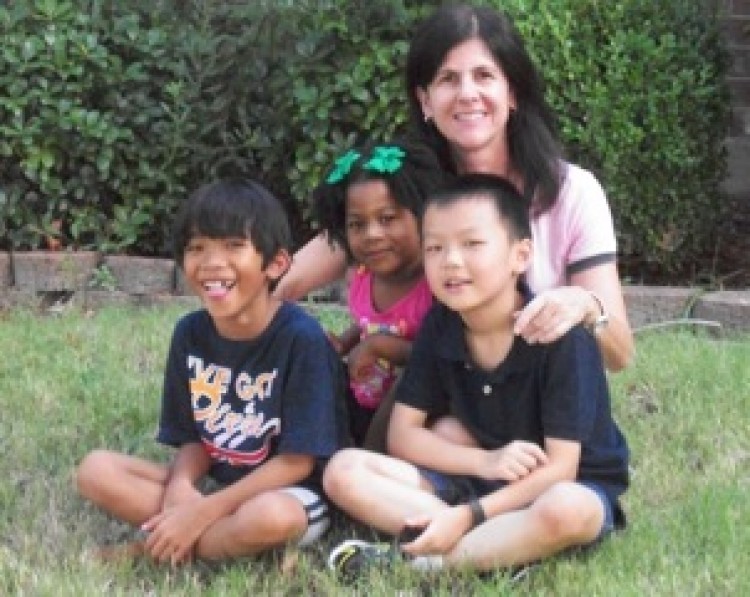 I adopted my seven-year-old son Adi (“jewel” in Hebrew) from Shanghai, China. He joined my daughter “Mei Mei” (age 4) and other son “Ge ge” (age 8) who were both adopted via domestically, at birth.

In my third adoption, I was determined to adopt a special needs child. I chose China’s Special Focus program due to its stability and good reputation. While I was open to a variety of children characteristics and special needs, my heart went out to boys who seemed to have trouble finding families. I was not open to hemophilia, however, because the information I read about sounded very scary: Uncontrollable bleeds, disability, vision loss, brain bleeds and death. I read that these children needed numerous “blood transfusions”, and I thought that as a single mom, this was beyond what I could handle.

I started to review files, but just kept coming back to 7 year old boy who was abandoned at the age of 16 months due to his hemophilia status. To my relief, his medical file indicated that he had a milder form of hemophilia. His birth note was a heart breaking plea from his parents, saying “we are from the village area and are very poor, hope the kind-hearted person save him”. I kept reading these words over and over. The note mentioned one person, just one committed person to answer their plea and go the extra mile for this boy. I decided that this person would be me.

On “Gotcha Day”, Adi was very bruised and pale. I started to suspect that his hemophilia was more severe than stated in his file and on a hunch, insisted to get the “entire medical records”, not just a “sampler”. Half an hour later, I had a stack of papers, all in Chinese. I broke out in tears when I realized that they probably indicated that my son’s condition was much more severe than I had thought. The hotel receptionist helped me translate the records, and the email exchange with international adoption doctor Dr. Jenista and the Hemophilia Treatment Center in Dallas solidified the suspicion that my son has indeed severe hemophilia A.

I had an hour long phone conversation with my (wonderful) social worker on the phone, pondering how to manage the situation. Leaving Adi behind was not an option. He would age out and no longer receive treatment; he would become disabled and die young. I realized how much power I actually had: As somebody who had access to America’s first-in-class healthcare, I could provide life-saving treatment. The idea of intravenously administering clotting factor and always having good insurance (hemophilia treatment is expensive!) seemed suddenly very manageable inconveniences. I was set out to adopt a special needs child, and this is why I came to China. I needed to get Adi home and figure out the rest.

Adi’s severe hemophilia was confirmed back home. The dire symptoms I had read about referred all to untreated hemophilia. Modern factor replacement therapy revolutioned hemophilia in the 1990s. They allow children like my son to lead an essentially normal life and have a normal life span. To my relief, I was informed that hemophilia was managed by parents in a home-care setting and that visits to a hospital were infrequent. I received training by a home health care agency on IV infusions and felt comfortable in my ability to render treatment myself. (Maybe I have always been an “inhibited nurse”?)

Today, other than me administering clotting factor intravenously (which takes 5 minutes!), we lead a normal life. Adi is soaking up every bit his new life and wants nothing more than just become a typical American kid. There is not a day that goes by without him telling me “I love you” and “you are a good momma”. He is tremendously proud to go to “American school” - and to do homework!

I find hemophilia all in all a very manageable condition, somewhat similar to diabetes. It saddens me that so few parents consider this special need as an option, and I would greatly, greatly encourage any prospective adoptive parent to do so. I regret deeply that I was misinformed before I adopted my son, I regret that I was not open to severe hemophilia. What I can do now is advocate, and advocate I do.

What children with hemophilia require of their parents is going an extra mile. Just that. An extra mile. In exchange for the relatively moderate efforts that factor replacement therapy requires of us parents, our children will live, and they will live well. It does not get better than that.