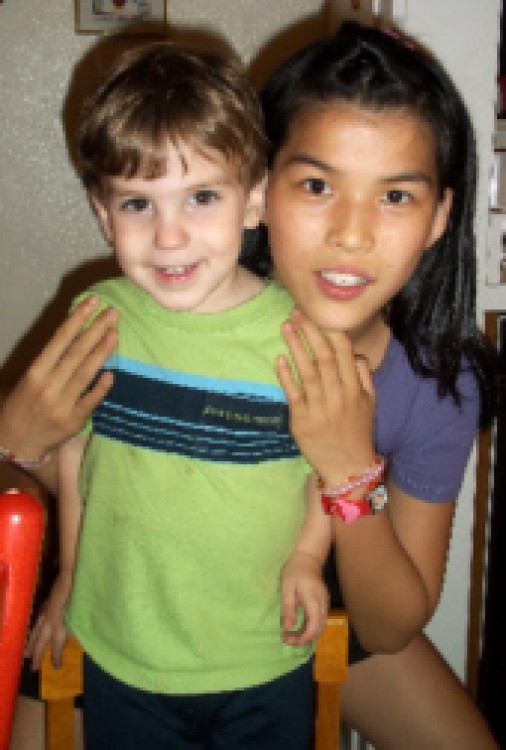 I clearly remember a number of years ago, many years now, when my husband and I first began to see news reports that the People's Republic of China had opened its doors to Americans who wanted to adopt orphaned Chinese children.  The children were mostly girls, and soon they began to appear in the large metropolitan area where we live.  We saw Caucasian couples like ourselves with their Chinese daughters in grocery stores, gymnastics classes, parks, playgrounds.  We began to have a community of friends with daughters adopted from China.

Rick and I were fascinated by those adoptions.  We collected adoption stories and shared them with each other in the evenings when our children were in bed.  I have an adopted younger brother, so I already had a very positive attitude about adoption in general, and Rick was attracted to the happiness and joy that the newly formed adoptive families seemed to exude.  We wondered about pursuing such an adoption ourselves and began to talk to other families about the rules and regulations regarding Chinese adoptions.  The reports we heard were discouraging.  Some told us the process was impossibly expensive.  Others told us that the disparity in our ages was too large, or that my husband was too old to be considered as a candidate for a Chinese adoption.  Several couples pointed out to us that there were limits to how many biological children a couple could have and still be considered for adoption.  We already had five children at that time, and it seemed like we were well over the biological child limit at that point.  Therefore, we shelved the idea of adopting from China, and each time we felt the yearning for another child, we had one ourselves until we had a bustling family of thirteen children, seven boys and six girls, in our modest suburban home.

It was at that point, when we already had a very large family, that we really got serious about adoption.  As experienced, mature parents, we felt that we had a lot to offer to a child who might be in difficult circumstances, might not fit the criteria for the standard healthy-infant adoption. A child that might need the support and experience that the parents of thirteen children could give.  We did our own research and found the agency A.S.I.A., far away from our own state of Illinois , but willing to work with us on a waiting child adoption.  We learned that because of my husband's age, the CCAA would only consider placing a child ten years old or older with us.  We felt comfortable with that.  My husband and I had had a lot of infants; we did not have the overwhelming desire to hold a tiny baby in our arms again.  We asked for the file of a ten year old girl on the waiting child list, a girl with a cleft palette, who needed a home.

Instead, we received a note from our agency telling us that that particular child's file was with another family and asking us to look at a file for a girl called "Julia."  I opened the file and began to read.  Julia was thirteen years old.  She had less than one year before she would turn fourteen and become unadoptable in China .  If she was not adopted, her future in China would be extremely limited due to her status as an orphan.  She was extroverted, sociable and friendly.  She got along well with others and was well-liked.  The file said that Julia was a slow learner and needed time at night to study hard to catch up to her classmates each day.  My husband and I talked about Julia.  She was older than the child of ten that we had hoped to adopt.

I was concerned that we would have only four short years with her before she was eighteen years old and became a legal adult, maybe going off to college or off to live away from us on her own.  Still, the more we talked about Julia, the more convinced we became that we should attempt to adopt her.  Three weeks later we received that pre-approval, and our adoption race was on.  We had only a short time to make it to China to adopt Julia before her fourteenth birthday.

We did make our deadline, and Julia has been part of our family for three months.  Having watched my parents and many friends adopt infants, I would have to say that adopting an older child presents very different challenges than adopting a baby or a toddler.  I do think that in certain ways it is harder.  The two main challenges that our family has faced so far have been Julia's grieving and the challenge of integrating a child with an established cultural identity into our suburban American culture.

Julia's grieving upon arriving in the United States was heart wrenching.  She had bouts of crying that made me sob with her, times when she was inconsolable over the loss of her friends, those who were adopted and moved away before her, those who were leaving for their adoptive homes after her and those who simply never were adopted and had "aged out" of the adoption system.   In addition to grieving those losses, our daughter struggled to fit into American culture.  She was extremely frustrated when she had so much to say and so few people around her could understand her.  We had to lean heavily on Chinese friends for support and translating help.

Julia was initially frightened and repulsed by the many different colors of people around her, those with very light skin and light eyes being the  most horrifying to her.  She made derogatory comments about some of our children's curly hair and light colored eyes that hurt their feelings.  She was overwhelmed by the odd taste of American food, and even though we cooked Chinese with all our energy, it just wasn't the same as the food at home in China .  The early weeks of being at home were difficult and exhausting for everyone.  We all had to work hard at integrating our new daughter into our family and our community.  My husband and I and Julia had to work the hardest.

And now?  What a huge difference three months can make!  Julia is speaking a lot of English.  Recently she told a neighbor, very proudly, "I have a lotta lotta English now!"  We can talk to each other, and that makes everything so much easier.  She has met many friends at school and at the Chinese church that she attends every Sunday with my husband and second oldest daughter.  At Chinese church, she can relax and speak Cantonese with her ever-increasing group of friends.  Julia is always one of the last kids to leave church on Sunday because she feels so happy to be around other Chinese people. Julia also loves the public junior high that she attends.  She likes the kids, the work, everything except the noisy lunchroom.   At school, she speaks English with her friends, and sometimes it is a struggle to communicate, but she perseveres and is well-liked and popular with her peers. Interestingly enough, there seems to be no trace of the learning difficulties mentioned in her file.  She learns at least as easily as the average child, maybe more easily.  The "slow learner" label in her file remains a mystery to us.  Our Chinese daughter is slowly getting used to people of different colors and races.  Although she still prefers her own Chinese looks, she can now be around people with light coloring without feeling horrified.  She is eating a huge variety of foods, even Italian food, which many of our Chinese friends told us Julia would never learn to like.

Every day we are learning  more about our daughter, and she is learning more about us.  She is learning to love and trust the family that worked so hard to adopt her.  She is learning that when we tell her something, it is the truth.  She is learning that we are with her for good; no matter what happens, we're not going to leave her.  We are working hard to show our daughter that we love all of her, the Chinese part, the new American part, the weak and strong parts.  We are showing her that we respect and admire her culture and asking her to respect and admire our culture in return.  Each day we make strides, all of us, in positive directions.  We are growing together as a family.  Some days are easy, and some days are not easy, but every day we are a real family with common values, beliefs and goals.

Our biological children love Julia and admire her for her quick wit, her vivacity and the exuberance she brings to any fun activity.  My husband and I love Julia because: she is Julia.  She is our daughter, born in an unknown location in China , raised in Guangzhou and carefully transplanted to to Illinois at age fourteen.  She is a Chinese child.  She is an American citizen.  She is the child that we rushed and worked and labored to adopt.  She is our dream come true.  She is our daughter.

She Will be Loved

Why Wait to Adopt?